During my first year of University, I attended the University of London Officers’ Training Corps (ULOTC) and underwent military training. I got to see HMS Bulwark and a Royal Marine Landing Craft, which gave me an appreciation of the type of work engineers do to aid the UK’s naval warfare force. I never expected to end up in the defence industry, but I guess my experience in the ULOTC gave me the kick for it. 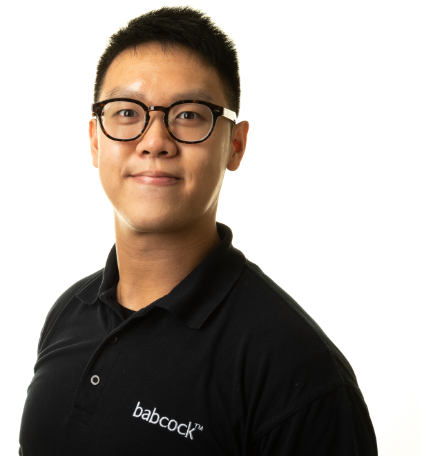 Why did you decide to study Mechanical Engineering? What sparked your interest to study this particular degree? I really enjoyed doing maths and physics in school and sixth form. I went on a physics trip in Year 12 to CERN, Switzerland to see the Large Hadron Collider. The sheer size of the infrastructure amazed me, there must have been a large number of projects going on. I knew then that I wanted to be part of something big. But overall, Mechanical Engineering involves systems, whether that may be big or small, which was why I wanted to be a Mechanical Engineer.

What does your current role as a Graduate Mechanical Engineer involve? In my first placement, I was part of a Technical Team overseeing the overhaul of various weapon systems. The team investigates issues arising during the overhaul of various weapon systems, in addition to designing and testing prototyping components to improve the reliability, safety and performance of these systems. I am now part of a Systems Engineering Management Team that provides management, logistical support and boat integration for submarine supportability.

Can you tell me a little bit about the company that you work for? Babcock is a leading provider of critical, complex engineering services which support national defence, save lives and protect communities. They focus on three highly regulated markets – defence, emergency services and civil nuclear, delivering vital services and managing complex assets in the UK and internationally.

In the Marine Sector I’m in, we ensure that the UK Royal Navy goes to sea safely by supporting their ships and crew around the world. We also support navies around the world through the delivery of complex ship and submarine sustainment programmes, and deliver marine technology solutions to improve our customer’s complex, safety-critical operations.

Given the nature of the markets that your company focuses on, does the majority of the work you do have to remain classified? Do you feel a certain pressure working to support national defence? A significant proportion of the work is classified information due to the nature of the business. It’s important for information to be carefully controlled when working for a defence company.

I don't feel pressure working to support the national defence, as all of our work is rigorously carried out and checked. It is very rewarding to see the direct impact your work is having once it is finished.

Why did you decide to work for Babcock International? During my first year of University, I attended the University of London Officers’ Training Corps (ULOTC) where I underwent military training. As part of their yearly summer Adventurous Training we went to Devon. In Devon we visited HMNB Devonport which is where I am now based. I got to see HMS Bulwark and a Royal Marine Landing Craft, which gave me an appreciation of the type of work engineers do to aid the UK’s naval warfare force. I never expected to end up in the defence industry, but I guess my experience in the ULOTC gave me the kick for it.

What were some of your favourite modules that you studied whilst you were here? My favourite modules (which were probably the hardest) were Computational Engineering and Computational Fluid Dynamics (CFD). You can say that these are the computational and modelling aspects of solids and fluids respectively. Even though they were hard, I do enjoy a challenge! These are definitely skills an industrial engineer would need if they wanted to head more into an analytical design route (as I want to).

What would an analytical design route involve? What kind of roles would be open to you in this field? An analytical design route would basically be a design engineer but with a specialisation in computational modelling to perform CFD or Finite Element Analysis. The role would be quite technical due to the theoretical knowledge required, but you’d also need skills to be able to survey the information you require, verify, validate and analyse the results and provide solutions.

Once you’re an engineer, the roles within engineering that can be opened up are limitless due to the transferability of the skills you learn along the way. The main roles I can think of specifically connected to this role would probably be research and development or consultancy.

I understand that you were Social Secretary of the Barbell Club. Why would you recommend that current students get involved with sports or societies during their studies? I think it's very important for students to be involved in a sport or society as it provides something different from studying. The Barbell Club was the main reason why I transitioned from “just going to the gym”, to a performance sport. I have now done Olympic Weightlifting for three years. Apart from the sport itself, there was a real community in both the Barbell Club and at Qmotion. Overall, it helps to take a break from studying and to have something to look forward to after lectures - both training and socialising.

How did your time and study at Queen Mary help your career and development? I think the careers department in SEMS really helped to ensure students like me could obtain soft skills to show employers, even if they aren't engineering related. This was one of the reasons why I decided to do my first part-time job at McDonald’s quite late at the end of 2nd year, where students would usually have done one during college or sixth form. After that I did a multitude of jobs including Uniqlo and at a food stall in Greenwich Market.

Queen Mary had societies such as Formula Student which gave me a taste of industrial engineering that I also mentioned in interviews at assessment centres. All of these contributed to my masters’ final year dissertation group project, which was the design and manufacture of a wave energy converter actuator testing rig.

Apart from the academics, engineering societies and part time jobs, I also competed competitively for Queen Mary’s Cheerleading Team and qualified for the weightlifting British University nationals. These sports gave me experience in competency skills interviewers look for.

Is there any advice you would give to current students or recent graduates considering their career options? Experience, experience, experience. Experience will help you demonstrate to employers that you have the evidence of what actions you took and the end result. I intended to do an industrial placement before I joined university, but I never made an application. I would procrastinate on one application but never actually finish it. I’d have to thank my experience in Formula Student and my master’s project, which were both closely related to the Graduate Scheme I was applying for work-wise (and soft skills gained from my sports and part time jobs) for helping me get to the stage that I am currently at in my career.

With regards to doing your first assessment centre, mine was a total train wreck. Even though I did really badly, progress was still made as I used my prior experience to ensure that I did better on the next one (from which I secured two interviews). Don’t worry about getting it perfect first time! What matters more is what you do next time rather than dwelling on the past. Always look to the future.

What was so special about your time at Queen Mary? I’d say the most memorable moment I have was my first freshers pre-drinks with the Commuter’s Society. I met a group of friends that I still keep in contact with even now that we have all graduated. It was where I met one of my best friends as well.