To be in the newsroom at the time an era-defining story breaks is exhilarating; I was there for the credit crunch, the expenses scandal... I was even thinking about putting my coat on and going home for the night when, in January, Harry and Meghan announced they were quitting the royal family (we pretty much tore up the next day's newspaper on the spot). 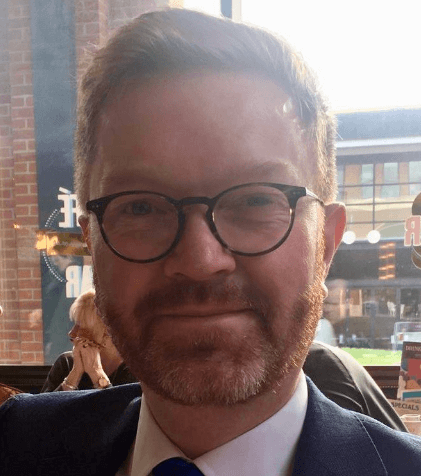 Why did you study English at Queen Mary? English and modern languages were my thing, and Queen Mary and Westfield (as it was in the early 1990s) offered an English BA that combined the study of Shakespeare and Chaucer with the decidedly non-canonical: colonial writers, women writers, gay writers... After the basics, you could pretty much choose what 'else' to study, which suited me.

What aspects of your degree did you find most enjoyable? What modules did you like learning about and was there anything that surprised you in your studies? I read BA English at a time when several notable lecturers from the English and Drama department, such Lisa Jardine and Jacqueline Rose, were regulars on my favourite late-night BBC Two arts shows. I suppose I was drawn in by that - or star-struck, if you like. The course was modular, so I was also able to study in other departments, and took courses in French New Wave film, Catalan culture, gay and lesbian studies... I still dine out today on the fact I spent an entire term close-reading Proust's A la Recherche du Temps Perdu, and in the original. I couldn't read a paragraph of it today!

Why did you choose to study at Queen Mary in particular? Who wouldn't want to say that they were in the East End long before it was trendy? I still whizz past the Mile End campus on my bike twice a day, to and from work, and wished we'd had protected cycle lanes back in my day.

For my first year at Queen Mary, I was actually in college halls in South Woodford, a series of hideous, almost Soviet tower blocks that overlooked the roaring North Circular and which were demolished long ago. Grim, but my mother was happy as the canteen guaranteed me one hot meal a day.

Can you describe your career path up to date and touch on your current role as Features Editor of the Daily Telegraph? Before I graduated in the summer of 1995, I got a job helping to launch a new gay newspaper for London. Six months later, I was promoted to the editorship of the national lesbian and gay paper, the Pink Paper, at the height of the push for basic same-sex equalities (age of consent, workplace discrimination). In 1997, when I left after two years and joined the Mail on Sunday, my 'defection' made the BBC news. I went on to become deputy editor of the British Airways in-flight magazine High Life, and was part of the launch team behind the free London newspaper, London Lite, before joining the Daily Telegraph in 2007.

What do you look for in the stories you normally feature? What I do in my daily features section springs from whatever's in the news. Whether the big talking point is some fresh hell courtesy of coronavirus, or a big new Netflix series that's got everyone overexcited, my job is to put a human face on that story: a family that's been affected, someone whose life is just like that portrayed in Fleabag/Big Little Lies/I Will Destroy You. There's more to it than that, but really not much.

How does it feel to work for a publication as globally renowned as the Daily Telegraph? I've been a journalist for twenty-five years, more than half of which I've spent at the Telegraph, and it's definitely a privilege. To be in the newsroom at the time an era-defining story breaks is exhilarating; I was there for the credit crunch, the expenses scandal... I was even thinking about putting my coat on and going home for the night when, in January, Harry and Meghan announced they were quitting the royal family (we pretty much tore up the next day's newspaper on the spot).

In recent years, media organsations around the world have been grappling with immense, once-in-a-generation challenges, sparked by the internet and the rise of social media, which have seen journalism move from print to digital. And for all this, I've got a ringside seat.

I understand that you were Deputy Editor of CUB Magazine during your time at Queen Mary. Can you remember any of the stories you wrote/edited as part of this role? During my three years at Queen Mary, I rose through the ranks at CUB to become Deputy Editor. It was where I learned not only how to write for an audience and how to gather feature ideas, but also how to lay out magazine pages using a single, clapped-out Apple Mac (back then, a useful skill, in an era before digital publishing).

The story I'm proudest of was my interview with Derek Jarman, a pioneering gay filmmaker, diarist and artist who, at the time, was Britain's most high-profile person living with HIV. In his book Modern Nature, he had mentioned in passing where he lived in London, so I wrote to him on spec, never expecting a reply. But back came a letter, written in fabulously exuberant cursive script, and in purple pen, inviting me to spend the day with him at his art studio in Kensington. I believe it was the last interview he gave before his death in 1994 – and it settled in my mind that this is what I wanted to do for a living.

How did your time and study at Queen Mary help your career and development? Without a doubt, my undergraduate degree in English gave me the space to pursue extra-curricular activities in journalism, on campus and off, that landed me my first job in journalism. Being able to show a few years' work on a student magazine, as well being the Queen Mary correspondent for London Student and having done a work experience stint at Attitude magazine, the gay glossy which was then based down the road in Docklands, helped me on my way. Because of this, I didn't do a postgraduate NCTJ (National Council for the Training of Journalists) course - I just learned everything about journalism on the job.

What advice would you give to current students or recent graduates considering a career in the media/journalism? If you ask any journalist about going into journalism these days, the advice they'll probably give is: "Don't." But journalism gives you an armoury of transferrable skills - the ability to tell a good story, to work on your own and in a team, and under immense pressure from daily, sometimes hourly deadlines (especially when writing for online). All of which tick boxes for a variety of careers. I'm just not sure I could do anything else.

What was so special about your time at Queen Mary? As my college friends like to remind me, I was a terrible swot at Queen Mary. Sat in the front row, hand always shooting up to ask a question or give an answer.

But I wasn't always so cringeworthy. For a course in modern poetry, we were each asked to discuss a favourite text - so, just to be different, I read out the lyrics to Madonna's Bedtime Story as a way into a discussion about intertextualities, and upset a Bob Dylan fan in the process. It's a memory I cherish.

Complete the sentence: If I wasn’t Features Editor of the Daily Telegraph then I would be...a struggling novelist or a terrible secondary school teacher (please, anything but PR...). I'd always wanted to write pop songs, million-selling bangers and ballads that become chart-toppers for Britney Spears and Celine Dion. But, then, that's everyone's Plan B, isn't it?