I feel like even in the discussion of diversity and inclusion, Muslim representation tends to be on the outskirts, which is a problem. What do you do when you’re on the periphery of the periphery? By engaging with texts from the Muslim community, Muslim writers are able to take control of their own narrative which readers are then able to explore. 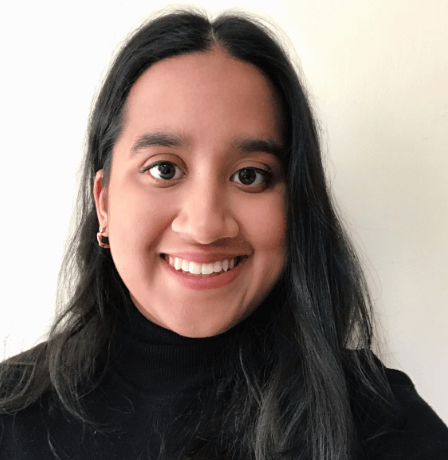 Why did you study English at Queen Mary? What sparked your interest in this specific degree? I have always loved to read. To me, books are a portal to new places, people and experiences I would otherwise never have the privilege of exploring. I couldn’t imagine studying anything other than English and I still can’t! The English degree at Queen Mary is especially brilliant due to how diverse the curriculum is (something that isn’t the case everywhere). As a student, I felt very fortunate that we got to explore such an eclectic range of texts.

What aspects of your degree did you find most enjoyable? What modules particularly stood out for you and was there anything that surprised you in your studies? I loved the fact that you could never expect what module might end up being your favourite. When I first arrived, I was convinced I was going to focus on Shakespeare and classical mythology. I ended up loving global and medieval literature.

My favourite modules include Postcolonial and Global Literatures, Writing Muslims and Heroes and Outlaws. In the first two classes, it was brilliant encountering writers such as Hasan Blasim and Mohsin Hamid and steering away from solely Eurocentric narratives we were previously only familiar with. It was also such a surprise falling in love with medieval literature. Exploring romances and myths and what they had to say about society half a millennia ago was really enjoyable.

Did you study any modules that related to faith and religion? Do you think it is important to see Muslim representation in the curriculum? I did! I undertook the module Writing Muslims in my last year and as I’ve previously mentioned, it was one of my favourite seminars and a highlight of my degree. We had the opportunity to explore a range of representations of Muslims. This included texts actually written by Muslim people which I believe is integral to authentic representation in the curriculum, especially when considering the often problematic portrayal of Islam in the media.

I feel like even in the discussion of diversity and inclusion, Muslim representation tends to be on the outskirts, which is a problem. What do you do when you’re on the periphery of the periphery? By engaging with texts from the Muslim community, Muslim writers are able to take control of their own narrative which readers are then able to explore. Having these stories on the curriculum ensures students graduate with truly diverse knowledge.

How did it feel to be a British Muslim woman studying in East London? A multitude of feelings were involved, varying from comfort to insecurity. I came to East London from St Albans, an area that is nowhere near as diverse. It was a real culture shock in first year, suddenly arriving in an area with a large Bengali population. Even though I was surrounded by people who looked like me, spoke the same language as me and had the same faith as me, I initially felt a disconnect. I was worried that I wasn’t Muslim enough.

But then there was the realisation that faith is a deeply personal thing. My faith consists of my innermost hopes, fears and dreams and it doesn’t need to concern anyone else. Once I realised that, I took comfort in the fact that I was a Muslim somewhere so diverse. It was brilliant not having to second-guess small things I might have worried about before, like asking if the menu is halal or dressing modestly. In London, there’s more freedom just to be yourself.

You are currently undertaking your masters in World Literatures in English at Oxford University. What does your current research entail? What thesis are you working towards? My current research expands on the global and postcolonial literature I loved in my undergraduate degree. I’m looking at a variety of material, from what exactly constitutes world literature, to prison writing around the globe. While challenging, it has also been fascinating exploring new theories and ideas.

My thesis will explore contemporary refugee literature and its comparison against visual news media, such as photography and newspaper articles. Media coverage of the “refugee crisis” has been criticised for being reductive and sensationalist. I wish to investigate how writers challenge this type of portrayal through Exit West by Mohsin Hamid, the collection Refugee Tales and Khaled Hosseini’s Sea Prayer. These texts represent the power of written narratives over media reports in providing representation that is far more multi-faceted and compassionate.

However, last year a major study found that most UK news coverage of Muslims is negative. Problematic representations of Muslims persist in popular culture. From the disappointing and yet unsurprising ending of the show Bodyguard, to sensationalist memoirs of women escaping extremist groups, a skewed representation of the Muslim community remains pervasive in the media. I have only encountered narratives that I find to be more positive or truthful within my studies, something that isn’t accessible to everyone. This needs to change.

What does Islamophobia Awareness Month mean to you? I’m going to be very truthful and say that I didn’t know about Islamophobia Awareness Month until I came across it on Queen Mary’s Alumni Instagram page. When I saw the first post, I immediately felt a wave of gratitude. Being Muslim, challenging Islamophobia and discussing the positivity of faith never seems to particularly be in vogue. The opportunity to explore all that the Muslim community has to offer and the challenges we face is an incredibly meaningful and important one.

Before undertaking your masters, you worked for Creative Access as a Marketing and Admin Assistant. Creative Access aims to help under-represented communities break into, and thrive in, creative industries. As an Asian and Muslim woman, why do you think it is important to see diversity and inclusion in the workplace? Everybody has the right to see themselves reflected in content they love. The content that the creative industries produce needs to be representative of its readers, listeners and viewers. To do that, companies have to be representative themselves. Otherwise, we risk never challenging stereotypes or hearing new stories and voices.

In my year at Creative Access, it was proven that there is so much talent out there from a range of different communities. I was constantly amazed by candidates demonstrating incredible skills and ideas. It’s now up to companies to recognise and hone this potential.

In your opinion, what are some of the most pressing issues faced by Muslim communities and what do you think needs to be done to challenge and raise awareness of such issues? From major political crises to microaggressions, Muslim communities are currently experiencing a number of urgent issues. The detention of Uighur Muslims in internment camps in China is horrifying and something I struggle to contend with. I cannot believe this news isn’t dominating the media. This summer we saw greater awareness on social media, but more needs to be done until there is real intervention.

In Britain itself, it was disheartening to read report findings that many Muslim students feel invisible, ignored, overlooked, undervalued or disregarded as Muslims at university. Faith is an integral part of someone’s identity and should never make one feel alienated or ridiculed. That’s why I believe campaigns such as this one are so vital. Universities are able to demonstrate their alliance with Muslim communities and their stand against Islamophobia in society.

Is there anyone in the Muslim Community that has inspired you and if so, why? Nadiya Hussain. I’m not sure if I’m supposed to answer with someone literary or obscure, but I really love and admire Nadiya’s work (and her baking!) Winner of my favourite series of Bake Off and an inspirational person when it comes to achieving your dreams, she is an icon. I still remember her winning speech: ‘I’m never gonna say I can’t do it. I’m never gonna say ‘maybe’. I’m never gonna say, ‘I don’t think I can.’ I can and I will.’ It always reminds me that we all can and we all will.

Now to reflect back on your time at university, what was so special about your time at Queen Mary? Can you give one or two examples of your most memorable moments?  As a very nostalgic person, there’s so much I miss about Queen Mary. The community of students and staff definitely made my experience special, there is an atmosphere of solidarity, unity and friendliness that is unrivalled.

One memorable moment includes breaking fast for the first time with friends. While I felt bad about unleashing my hangriness the first night, it was lovely spending Ramadan together. A second memory is attending the 2019 Media Awards! I felt so proud watching my friends get recognition for their writing and hard work, that’s definitely a night I look back on very fondly.

Lastly, is there any advice you would give to current students or recent graduates considering their career options? I understand this is a particularly difficult time to get a role or to think about getting one. I urge those currently looking not to become demotivated by rejections. They can be painful to receive but it is so important to keep going, you have so much to offer through your unique perspective, experiences and skills. Your industry needs you.

Secondly, this might seem like contradictory advice, but remember to also take a break. I’ve seen a lot of pressure to upskill and constantly be productive (especially now as we’re in Lockdown 2.0). But it’s important to remember that we are in a pandemic and it’s alright to take it easy. Take things at your own pace, your health and wellbeing are more important than anything else.

This profile was conducted by Alumni Engagement Officer, Nicole Brownfield. If you would like to get in touch with Moneeka or engage her in your work, please contact Nicole at n.brownfield@qmul.ac.uk.