I have loved radio since day dot. Whilst at Queen mary, I joined Quest as a new hobby; I started off with two shows a week and threw my all into them. In April 2018, after having covered with Rob Howard on and off for the last year, I was asked if I’d like to relocate to Brighton and launch a Capital there - obviously I said yes! 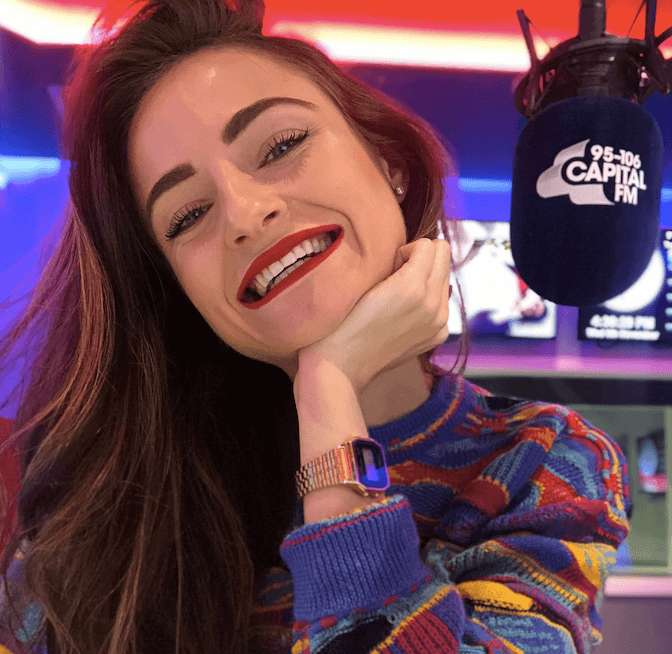 Why did you study Drama at Queen Mary? Did you have a particular career path in mind?

Embarrassingly, it’s an incredibly simple answer; I didn’t know what career I wanted, I knew I enjoyed Drama during my A Levels and Queen Mary seemed like an inspiring place to study, and was number one in the country for Drama when I applied - it was that straight forward!

What did you enjoy most about studying Drama and were there any academics that had a strong influence on shaping your time and studies here?

It’s almost impossible to summarise what I enjoyed most because if I’m being honest, the whole 3-year degree was endlessly eye-opening, engaging, intellectually stimulating and just plain fun. I learned about a world of theatre, performance art, political theories and creators that my humble little beginnings in A-Level Drama had never before shown to me, and I will forever be grateful that this staggering and wonderful world was explained by the leading academics who occupied it.

As for academics specifically, Lauren Barri Holstein and Martin Welton’s teaching was potentially the most formative aspect of my study, and their trust and confidence in me is what I am most proud of. Working under them was a privilege.

Can you describe your career path up to date and touch on your current role as Radio Presenter at Capital and Capital South Coast?

I have loved radio since day dot. When I was little I would have Kerrang playing in my bedroom gone 10pm with the volume really, really low so my parents wouldn’t hear it! It’s such a uniquely personal and comforting media format. Whilst in my second year at Queen Mary, I found myself missing home a lot (London is the best place in the world to go to Uni, but it can be a little overwhelming at times), so I joined Quest as a new hobby. I started off with two shows a week and threw my all into them. Once I graduated and moved home I’d already caught the radio bug, so I applied to work at the hospital radio station, BHBN in Birmingham. I was there for over two and a half years collecting requests from patients and doing my own show, ‘Songs From The Stage and Screen’. I also joined a community station (BRUM Radio) during that time and I really worked at honing my craft. I was working at an independent cinema and presenting two shows a week for over two years and in February 2017 I finally felt I was good enough to approach Capital Birmingham. I demoed there and covered my first week of breakfast shows alongside Rob Howard soon after. In April 2018, after having covered with Rob on and off for the last year, I was asked if I’d like to relocate to Brighton and launch a Capital there - obviously I said yes!

In terms of your career so far, have you had any life-changing moments where you’ve realised you’re doing a job that you really love?

Yes! I was so lucky to have the privilege of switching the Brighton Christmas Lights on; we were in front of thousands of people who were buzzing with excitement and I had a little pinch me moment where I thought "wow, this really is your job?!" It was a proper 'bucket-list-ticking' moment for me.

I’m an oversharer who believes talking and finding like-minded people is one of the best forms of therapy, so I use my social media platforms to speak openly about my experiences with endometriosis, miscarriage, IVF and women’s health in general. I've started my own YouTube channel where I'm speaking up about all of this, so I would love to see that grow as it's a safe and honest place to educate and help other people. Type Miranda Burns into YouTube if you fancy having a nose.

Radio presenting, unlike some other careers, especially in the media and creative industries, has been allowed to continue throughout the pandemic. Now that many of us are working from home and are more likely to be listening to the radio, do you feel more pressure to provide a show that can raise people spirits and provide some escapism?

I felt such immense pressure to be a reassuring and friendly voice in those early months of the pandemic. We had Breaking News bulletins firing left, right and centre, and yet the whole time we presenters had to remain calm and supportive on air. It was pretty quickly established that Capital was going to be a form of respite in those uncertain months that followed, and we’ve tried to keep up a positive but respectful show ever since.

Have you adapted your shows in any way since the outbreak of the pandemic?

Content has been trickier to find! When planning a show, you scour the internet for funny stories about normal people or celebrities, and because no one was doing anything other than staying indoors, it got so quiet. We’ve introduced more games and listener interaction instead; chatting to key workers, keeping audience members who are working from home company with shout outs, playing silly and trivial games that you can chuckle to wherever you are listening.

How did your degree prepare you for your job as a radio presenter? Which aspects of your degree are relevant to your job?

My degree allowed me to build a lot of self-confidence and although I still do struggle with self-doubt (don’t we all?!), getting a First at Queen Mary has remained a huge achievement which I often look back on if I need a little motivation and self-belief boost.

What advice would you give to students and alumni wanting a career in radio presenting and radio more generally?

The best thing someone (Chris Stark funnily enough) ever said to me was, “you get one chance to walk through the doors at the BBC, be ready and don’t f*ck it up”. This can be applied to Global/Bauer/any established broadcast station - they want to see professional standard individuals; you certainly don’t have to be perfect, but you must know your craft, your unique sound, and just generally your stuff before you can go knocking on the big doors! I did radio for about three years before I approached Capital.

Have you got any examples of any challenges you’ve faced so far in your career in radio and how you overcame them?

A career in the media often means sacrifice. You need to be flexible, ready to move and adaptable. I’ve lived in three different cities now following my radio career, and have missed out on family events/social occasions and quite a lot of sleep to get where I am now. I’ve had to learn how to strike a balance between hard work and also letting myself rest, which if I’m honest is still something I’m working on...

As a radio presenter, you have clearly developed your own voice. Do you use your voice and position to speak openly about any causes that are close to your heart?

Yes! Perhaps even too much (whoops). I’m an oversharer who believes talking and finding like-minded people is one of the best forms of therapy, so I use my social media platforms to speak openly about my experiences with endometriosis, miscarriage, IVF and women’s health in general. It has helped me a lot, and I know it has helped others feel less alone too. I don’t mention it on my show (there’s a promise between a listener and a presenter that when that listener turns capital on they’re going to hear happy and funny links), but everywhere else (Instagram/YouTube) it’s one of my go-to topics of conversation!

March is dedicated to the celebration of Women’s History Month. Why do you think it is important to celebrate this month?

It is so important to celebrate Women's History Month as a marker of how far we've come, and how far we are still yet to go. I often remind myself that the word hysteria is derived from the Greek word for uterus - a very unfortunate and yet pretty exposing association. I am passionate about women's health, and until our pain is taken seriously, enough has not yet been done.

What advice would you give to a prospective student considering studying Drama at Queen Mary?

Do it! Oh my goodness just do it! You will be part of the coolest club and learn so much. Listen to your lecturers and try to absorb as much information as you possibly can; you’ll miss that intellectually inspired conversation when you graduate!

Were you a member of any societies or volunteering groups during your time at Queen Mary? If so, what did you gain from them?

Quest! It’s where everything began for me and it holds a very special place in my heart. Also it let me sharpen my teeth without a massive audience; let’s all say a little prayer that those old shows never see daylight again…

What was special about your time at Queen Mary? Can you give one or two examples of your most memorable moments?

My Practice Based Research Project (dissertation performance) is not only one of my most special moments at Queen Mary but also one of the most special moments in my life. I created an explorative piece about my experience with epilepsy and put my all into the performance. It was exceptionally nerve wracking to attempt such vulnerability but it paid off.

Another example and a very stereotypical answer is Freshers! And not just Freshers, but Freshers in London, specifically. It’s so much fun exploring the city not as a tourist but as someone who lives there, knowing you don’t have to go home at the end of the weekend.

What are your future aspirations? In terms of your career, your life and in general?

I've started my own YouTube channel where I'm speaking up about women’s health and my own infertility struggles, so I would love to see that grow as it's a safe and honest place to educate and help other people. Type Miranda Burns into YouTube if you fancy having a nose.

This profile was conducted by Alumni Engagement Officer, Nicole Brownfield. If you would like to get in touch with Miranda or engage her in your work, please contact Nicole at n.brownfield@qmul.ac.uk.