Pride to me means having the freedom to live as your true self. Too many people are forced to conceal parts of their identity for fear of rejection or discrimination. We need to cultivate a society that embraces different identities from a young age, allowing people to grow up with confidence, security and an acceptance that difference is beautiful. 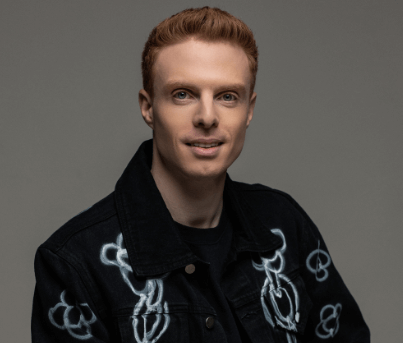 Why did you choose to study English and Drama at Queen Mary? Having grown up in the Herefordshire countryside, I always knew that I wanted to escape to London as soon as I had the opportunity to. Not only did Queen Mary have one of the best English and Drama courses in the country, it was a hub of multiculturalism with a campus that had direct access to the flourishing Shoreditch scene at that time. For someone who was used to small town life, this offered me the adventure I'd long wanted to go on to discover both myself and the world beyond the bubble that was my childhood.

What does your role as Editorial Director of GAY TIMES involve and how did you work your way up to this role? As Editorial Director at GAY TIMES I’m in charge of the strategy, vision and management of the company’s editorial output. This means serving as editor of the publication and website, managing all of our social channels, and ensuring editorial consistency across our brand and partnerships business.

I started my career as a reporter for an entertainment website pretty much straight out of university. I joined GAY TIMES in early 2017 as Online Editor and rapidly grew the audience across our digital channels. In early 2019 I became Chief Content Officer and launched a new regular digital cover, played a key role in securing editorial content partnerships and grew our social media following the largest of any LGBTQ+ media brand globally. I took on the role of Editorial Director at the start of 2020 with the aim of bringing all of the GAY TIMES content channels together more closely, building new audiences for the publication, and setting it up for a new generation of LGBTQ+ people.

What is the overarching vision your colleagues and yourself strive to uphold at GAY TIMES? The key mission at GAY TIMES is to amplify queer voices. LGBTQ+ rights have come a long way in this country in recent years, but there is still much work to be done - especially when it comes to the trans and nonbinary members of our community. Our aim is to support and uplift those most marginalised in our community, to celebrate the successes within queer culture, and to recognise the challenges we have yet to overcome. While everything we do is primarily for the benefit of the queer community, we have found that allies looking to educate themselves on LGBTQ+ issues also engage with our content.

How did your time and study at Queen Mary help your career and development? My time at Queen Mary expanded my worldview exponentially. The fact that it attracts so many international students, had a varied range of classes to choose from, and the campus served as a cultural hub for a diverse and inclusive community of students, meant that I was exposed to so many new ideas, voices and experiences that ultimately formed my outlook. Obviously being challenged to write extensive essays on thought-provoking theory and literature helped shape me to become the writer that I am today, but it was being challenged to think beyond the status quo that has served me well in my career.

What does Pride mean to you and why do you think it is important to celebrate it? Pride to me means having the freedom to live as your true self. Too many people are forced to conceal parts of their identity for fear of rejection or discrimination. We need to cultivate a society that embraces different identities from a young age, allowing people to grow up with confidence, security and an acceptance that difference is beautiful. It’s important to continue celebrating Pride because we still have so much more progress to make. No LGBTQ+ person is truly liberated until all LGBTQ+ people are liberated. Trans women of colour were at the forefront of the beginning of the Pride movement 50 years ago and they remain the group of people most at risk of extreme violence and discrimination in society. They fought for us so it’s important that the entire community continues to fight for them. We have a duty to lift each other up and leave nobody behind.

How will you be celebrating Pride this year given the restrictions due to COVID-19? I’m going to use the time and energy I’ve traditionally spent marching in Pride parades to read up on some of the lost heroes within our community. As I’ve gotten older I have become more invested in learning about queer history and there are many stories out there that just don’t get the exposure they deserve. I’ve been reading Queer City by Peter Ackroyd which chronicles the LGBTQ+ community in London from the time of the Romans to the modern day.

In my role at GAY TIMES, I’ve just launched a new campaign called 2020CAPSULE: A unique year in Pride, documented. The aim over the next three months is to commission and collect a series of essays, poems, video diaries, letters and photo essays to document Pride season during a pandemic, recognising that we are living through a period of history right now that will be looked back on in years to come. At the end of the campaign it will be donated to Queer Britain, which is the UK’s first dedicated museum to LGBTQ+ history.

What do you think still needs to be done to give greater equality and representation to the LGBTQ+ community? I think there needs to be better education for students much earlier in their lives. Until I got to university, LGBTQ+ people or history very rarely cropped up in the curriculum, if ever. And when they did, teachers traditionally skirted around that part of their identity. There needs to be a more inclusive approach to education, celebrating and noting the big contribution of LGBTQ+ people to society, but also teaching the tremendous hardship and struggle they have faced. I have a whole group of straight friends back home who still don’t really know how the modern LGBTQ+ liberation movement began, or who Alan Turing is, or even the fact that homosexuality is still illegal in 69 countries across the globe. We need to be speaking about these facts of life in classrooms, have challenging conversations about our history, and have a more inclusive and responsible dialogue around gender identity and sexual orientation in schools.

Is there any advice you would give to current students or recent graduates considering their career options? My advice would be to choose a career where you can incorporate something that you are incredibly passionate about into it. I’m a huge music fan, but I knew very early on I was never going to be a musician. Instead I’ve been fortunate enough to write about music as a career, and even now with GAY TIMES I get to support emerging LGBTQ+ artists through various editorial campaigns. There’s never going to be a career path where you’re going to love every aspect of the role (I hate budgeting and spreadsheets in my job), but if you can have that one part of your career that continually excites and stimulates your enthusiasm, you’ll have a much better quality of work life.

What was so special about your time at Queen Mary? What I loved is how the campus is its own little world, but then also has easy access to the rest of London. I lived on campus for my first year and very close by for the years after, and I also worked in the student union coffee shop and even Drapers for a semester. I enjoyed the sense of community and belonging - especially as someone completely new to London. I met people during Fresher’s Week that, 13 years on, I still consider some of my very best friends. In terms of specific memories, the school disco-type parties in the Great Hall in the People’s Palace (because Drapers was closed for renovation in 2007-08) were very fun and messy. To balance it out, my other fond memory was getting a very good grade for my Ulysses module as I worked so hard not to be defeated by that novel!