I would encourage current and future graduates to consider nursing as a career. It’s seen as low status and poorly paid, but we really need well-educated, compassionate nurses who can make a real difference. My life would be much poorer without nursing. People say “how can you do that, it must be so depressing”, but it’s the opposite. It has given me so much. 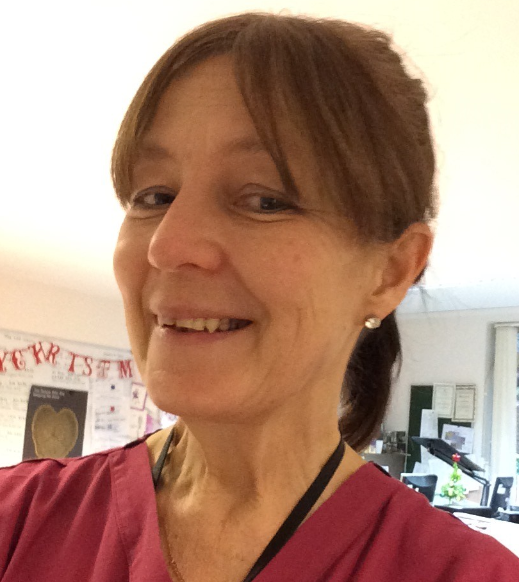 What sparked your interest in French? French is the most beautiful language in the world.

Why did you decide to study French at Queen Mary? Because Queen Mary College was the friendliest place. Also, I quite liked the contrast of a beautiful thing and Mile End, which at the time was very poor, was not very beautiful!

I understand that you now work as a Macmillan nurse; can you describe the path that led you to your current role, especially considering the fact that you studied French for your degree? It was quite random. I’d seen the deprivation around Mile End and I initially wanted to be a social worker. However, I couldn’t get a grant to do a second degree and as I had a medical student boyfriend at the time, I thought I’d try being a nurse instead.

What do you find most rewarding about your role as a Macmillan nurse? A Macmillan nurse provides symptom control, psychological support and generally helps in any way possible people who are dying and those close to them (and, occasionally, people who get better). We do research and try and shape health strategy. It’s rewarding to make a difference to people’s lives at a very important time for them. It’s more about living than dying – for instance, controlling people’s symptoms so that they can do all the things that they want to do before they die – for instance, to carry on working, or to see their friends, or take their children to Disneyland. I love the variety – I can be talking to government about policy, working out really difficult symptom control, then thinking about what incontinence pads are best for someone who still wants a sex life!

And what do you find most challenging? The chronic underfunding of our NHS by government and the increasing privatisation, which fragments services and takes money that should go to patients and gives it to shareholders. Recently, it took me 20 minutes on the phone to work out which ambulance company would take to hospital someone with a brain tumour who was fitting (the ambulance service in London has now been privatised).

Can you describe what a typical working day looks like for you? Every day is different, but it always starts with getting together with the team to look at new referrals, meetings and workload. We each have a caseload of patients who we are responsible for. I’m a Community Nurse Specialist, which is far more fun than working on a ward. People are more themselves at home, and on a ward, you don’t get dogs pulling out central venous lines, and have to work out what to do! The best bit of the day is seeing people at home; I see 3-6 people a day to review their symptoms, support them and those close to them, and generally do what I can to help, maybe a social worker or physio referral. Later, I might meet with GPs or ANT to talk over any issues, or do some teaching or research. I’m on a reader’s panel for The Royal College of Nursing, so in the evening I might prepare for that.

Why did you choose to study at Queen Mary? It had a good reputation for languages, and I loved the friendliness from the minute I walked in.

How did your time and study at Queen Mary help your career and development? I grew up in a village, and coming to Queen Mary opened my eyes to a much bigger, more diverse world. It made me realise that I wanted to do something to help people, and it meant that I could do a shortened version of my nurse training seeing as graduates can do a 2 year course.

Is there any advice you would give to current students or recent graduates considering their career options? Please consider nursing as a career. It’s seen as low status and poorly paid, but we really need well-educated, compassionate nurses who can make a real difference. My life would be much poorer without nursing. People say “how can you do that, it must be so depressing”, but it’s the opposite. It has given me so much.

What was so special about your time at Queen Mary? I loved my time at Queen Mary, but probably the best bit was meeting my husband, Marcus Chown, here. We met through one of my best friends, who did physics and whom I shared a flat with while at Queen Mary. We joke that our meeting was meant to be, as his dad used to deliver things to my village primary school. If I hadn’t have gone to Queen Mary, then I wouldn’t’ve met my soulmate!

You recently came back to Queen Mary for the ‘Evening with astronaut Michael Foale’ event and an observatory tour. What was it like returning to campus? Has the campus changed a lot since your time here? What a good evening that was. We’ve actually been back before that for a tour of the Olympic Village when it was under construction, but even since our last visit the campus has changed a lot. It’s much bigger now, and Mile End road is much less scary. I remember walking back to the tube station late at night after a concert, and hearing footsteps behind me. I sped up. So did the footsteps. I started to jog. So did the footsteps. I started to run. So did the footsteps, then a male voice said, “Please can I walk with you, I’m scared?”! It was an experience that has stayed with me for a long time!

Were you involved in any extracurricular activities like sports or societies during your time at Queen Mary? I did TechSoc for a bit, and the student branch of the Samaritans, but mostly I enjoyed being in London, doing something that I loved.

Lastly, if you could choose to have any other career in the world, what would it be and why? I honestly can’t think of anything I would rather do, which is the best feeling in the world!