In the context of moving abroad to work in Thailand, I believe Queen Mary prepared me to work in an unfamiliar environment with different people from different backgrounds. Due to its highly multicultural nature, Queen Mary taught me to embrace differences and to use them productively and efficiently at work. For example, I have led regional projects in Asia with teams from different countries and consolidated each team’s perspective on a particular issue. 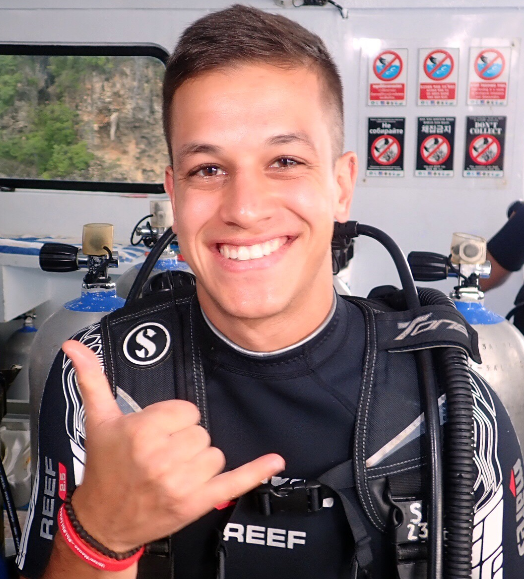 What did you study at Queen Mary and what are you doing now? During my 3 years at Queen Mary (2014 to 2017), I was a BSc Economics and Politics student. After the completion of my degree, I travelled to Thailand for an internship in Corporate Finance for 3 months, at a Strategic Consulting company called Tractus Asia. I was offered a full-time Research Analyst position after finishing my internship and I have been working in Bangkok ever since (almost 2 years now). I now juggle being a Consultant with being an occasional Thai Boxing fighter.

Oh wow! How did you get into Thai Boxing? Was this something you started from a young age? I started Thai Boxing when I moved to London to study. I was already doing a little bit of kickboxing in Angola which is similar and I then changed to Thai Boxing. I fell in love with the sport and its strong cultural and spiritual aspect and also with the simple people it attracts. Thai Boxing made me be a more humble, persistent and respectful person among other things. I started to take it more seriously while studying where I competed in amateur championships against other universities representing Queen Mary. Now, while living in Thailand I have made my professional debut with 2 fights.

It appears you have been travelling for work since the completion of your degree. What do you think the advantages are of working in different countries? I believe working in different countries gives you the opportunity to experience different work dynamics and working cultures, which is very important for professional development. As a comparison, working in Europe and working in Asia can be quite different. I believe both have advantages and disadvantages but experiencing both will make you a better candidate in the eyes of recruiters. Asia for example has a very fast-paced working environment. Working in Asia can also be more challenging coming from a ‘Western’ country but it can also be more rewarding. In Asia, information is not always available and you need to dig deeper to find the information you want. Reliability of information is also another issue that can be more important in Asia and therefore more due-diligence is needed.

Why did you choose to study at Queen Mary? While I was considering my university options, the first factor that led me to choose Queen Mary was its reputation and its ranking position on the subjects I wanted to study (Economics).The second factor was the Mile End Campus, which is a comprehensive and vibrant campus where you can find a library, cafés, restaurants, a gym and shops all in the same location. The latter is unique in London as many other universities have divided campuses. I believe Queen Mary’s Mile End campus plays a big role in creating a sense of community and brings students together making their time at university even better!

Another factor that I think makes Queen Mary so special is how diverse it is. Most universities in London are diverse and multi-ethnic, but I don’t believe they can beat the standard set by Queen Mary. You find people from everywhere in the world and this is illustrated by the number of cultural societies it has, for example from Thai Society, to Nigerian Society, to Iberian Society and many others.

How did your time and study at Queen Mary help your career and development? I moved straight from Angola (where I am from) to go study and live in London by myself, which was a big challenge. When making the move from Luanda to London, I had to adapt to a different education system. I studied in a French school in Angola and it was difficult in the first month to adapt to a new and different way of learning. I had to spend more time and put in more effort in order to understand things and get up to speed. What definitely helped was that I had many classmates at Queen Mary in the same situation and we helped each other out as much as possible. My teachers at Queen Mary also helped to make this transition as smooth as possible.

In the context of moving abroad to work in Thailand, I believe Queen Mary prepared me to work in an unfamiliar environment with different people from different backgrounds. Due to its highly multicultural nature, Queen Mary taught me to embrace differences and to use them productively and efficiently at work.

After my time at Queen Mary, I became a much more open-minded person especially in regards to other people’s opinions and points of view. During my studies, I witnessed how different individuals from very different backgrounds each bring their own perspective and point of view to a particular issue, thereby achieving a more valuable discussion. In my career, this has allowed me to lead regional projects in Asia with teams from different countries and be able to consolidate each team’s perspective on a particular issue and finalize reports. While at Queen Mary, I was also the President of its Muay Thai Club which gave me the experience of being a leader, managing a team, and establishing a strategic development plan for the club. As President of a sports club, I had to deal with issues such as marketing and club development. This has helped me to be a more proactive worker in my current job and participate in different business development issues in my company.

Is there any advice you would give to current students or recent graduates considering their career options? One of the best decisions I have ever made was not to jump straight into a Masters’ degree after finishing my Bachelors. As individuals, we never stop growing and discovering ourselves and we need time to do this before we commit to further study or a specific career. Often, we are not sure of what we truly want when we have just graduated. For recent graduates, I suggest working and/or travelling before choosing a Masters. Valuable work experience will give you a better picture of what it is that you really want to do for the rest of your life and what would make you happy.

I would further suggest that recent graduates should not be afraid of new challenges. Working and living in Thailand was not what I had planned. The opportunity came my way and I took it even though I knew there were risks and that it was out of my comfort zone. In this highly globalized world, take your chances and don’t be afraid to get out of your comfort zone, it might be the best decision you ever make! Don’t be afraid to fail as even in failure there is always a lesson to be learned.

Why is it exciting to do what you do? I believe working in a strategy consulting company abroad is exciting in the sense that when your client and its company are successful, it feels nice to know that you have contributed to that.

What was so special about your time at Queen Mary? Can you give one or two examples of your most memorable moments? I believe the memories I made while being a student at Queen Mary are priceless and will stay with me forever. My most memorable moments are probably my first day at university and my last day. I still remember those two days perfectly. On my first day, as a young 18-year old straight from Angola who had moved to study and live in London alone, I remember how excited and scared I was at the same time. My last day was a sad one. I did not want my time as a Queen Mary student to be over and I was sad when I realized I wouldn’t be studying at the Mile End library for my exams, or having a coffee break in library square with my friends anymore.

Do you have any role models that you look up to, both inside and outside of your field? In my field, I do not have any role models that I look up to. Outside of my field, I have always looked to my grandfather as an example. A young Portuguese man that migrated to Angola when it was still a Portuguese colony, my grandfather managed to build a family and a business in a foreign land by earning the respect and admiration of locals. He was a humble man and I look up to him for the values such as respect and persistence that he passed on to me.

Can you describe what an average working day as a ‘research analyst’ looks like for you? Is there variety in your field of work? During a normal day, my tasks are related to both project and client-related work and also business development matters. I work on projects of several of my company’s practices (Site Selection, Economic Development and Corporate Finance). My tasks usually consist of collecting data, analysing it and preparing the final report that is going to be presented to the client. Data collection and analysis can be done by desk research but also primary research with key stakeholders. At the moment for example, I am working on preparing a final report to help a Singaporean manufacturer of frozen foods find an optimal facility in either Thailand or Vietnam (Site Selection). In Economic Development, I work with the Trade and Investment Promotion Agency of the State of Victoria in Australia, Invest Victoria, to help them attract investment from Thailand to Victoria. In Corporate Finance, I am involved in building a lead pipeline for fundraising for a Medtech company. In Business Development, I am in charge of updating the company’s website, updating and drafting LinkedIn posts and I also help my Managers and Directors to prepare personalised Proposals for potential clients.

You have certainly got your hands full then! What do you do to unwind outside of work apart from Thai Boxing? I have 2 passions in life, Thai Boxing and Scuba Diving. It is not easy to go Scuba Diving all the time but while living in Southeast Asia, I have managed to go more often. For me it’s like going to a completely different world and I just love how you disconnect from everything else once underwater. To be underwater and be in contact with incredible marine animals is hard to describe. I just recently got certified as a Rescue Diver and I hope to be a Dive Master one day so that I can work in a dive center if I choose to do so.  Apart from that I also like to read. I am a big fan of history in general and used to read a lot of books about modern history. More recently, I have started reading more fiction books and I’ve become a big fan of Tolkien!