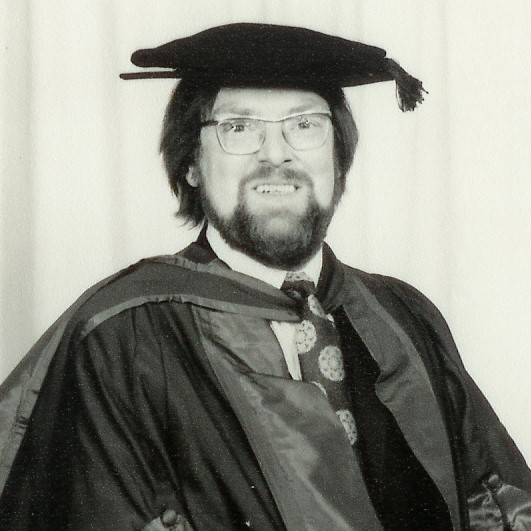 Jim Hoare graduating with his PhD in 1971

Why did you choose Queen Mary College, as it was then, to do your undergraduate degree in History?

What are some of your fondest memories from your studies?

After a couple of years when I found the curriculum rather dull and I certainly did not shine in essays etc., suddenly in the third and final year, I had a breakthrough – largely thanks to Professor Bindoff – and found myself really enjoying studying. From pretty low essay marks, I began to get good ones and in finals, nearly got a first. That year there were ten firsts for history in the University of London and Bindoff later told me I had come 11th.

It was also a liberating experience to be in London and to mix with a wide range of people – including girls! - not just the rather limited Catholic group I had known at home. (This was before ecumenism began to take off and I had been at a Catholic single-sex school.) I met my first wife, Jane Fletcher, now Jane Cox, also at QMC, who was one of the 10 students who achieved firsts.

There are so many societies and extra-curricular activities students at Queen Mary can get involved in today. During your time at QMC, were there any opportunities that you were involved in?

Of course, there were many. There were also university clubs etc., ran out of the University of London Union (ULU), which also had a fine swimming pool. Like many people, I suspect, I joined several during Freshers’ Week but did not keep up with them. I was for a year – I think – Social Functions’ Secretary on the QMC student union executive committee and even have a shield naming me as an Honorary Life Member of the Union – I doubt it would still apply.

Times are very different now. But never give up hope, do not be afraid of going down different tracks from those you had planned or hoped for, and throw yourself into whatever you do. Remember that opportunities do not stop at 21 or 22 – they will open up at all sorts of times. Grasp them!

Professor Bindoff was my inspiration. I had been accepted to do a PhD at UCL under Professor H.C. Allen on American history, but Bindoff persuaded two of us to look East – my classmate, Roger Knight, also went to SOAS and did his PhD in Indonesian history. We were both told that if we changed our minds, money would be found to allow us to go back to our original area of interest, but we both became hooked. Roger Knight went to Australia and took up an academic post in Adelaide.

Beyond your time at Queen Mary, you’ve had a career with the Diplomatic Service that has taken you to several countries. What drew you to this as a career?

I could not get a job in academia despite many applications and a few interviews. By 1969, I needed something permanent – we had had a baby and while my wife was an Assistant Keeper at the Public Record Office (now the National Archives), we never had enough money. So, when I saw a post advertised in the FCO Research Department, I applied and got it. I remained a Research Analyst all my career, reaching the top grade of Research Counsellor, but I had three postings: Seoul 1981-1985, where indeed, I organised a QMC dinner on one occasion – many South Koreans had studied at QMC, a lot in nuclear engineering. The Times correspondent was a graduate of the English Department, and my embassy colleague, Martin Uden, studied Law – he would be ambassador in Seoul from 2008-2011; Beijing 1988-1991, an interesting time to be in China! – and then in 2001-2002, I went to Pyongyang to set up the British Embassy in North Korea. It was a high note on which to end my diplomatic career.

You have also been a Senior Teaching Fellow at SOAS. What attracted you to teaching?

As I said, I had hoped to be an academic when I started out. Indeed, I did apply for the occasional post even while I was in the Diplomatic Service and got two interviews but no offers. However, I had kept up my academic interests and had published academic papers, originally on Japan, and later, Korea and China – for most of my time in the FCO, I had worked mainly on China. I also began book reviewing.

After we came back from South Korea, my wife, Susan – Jane and I had divorced in 1977; she remarried that year and I did so in 1978 – and I wrote a general account of Korea, Korea: An Introduction, which came out in 1988. We collaborated on several other books, either as editors or authors. 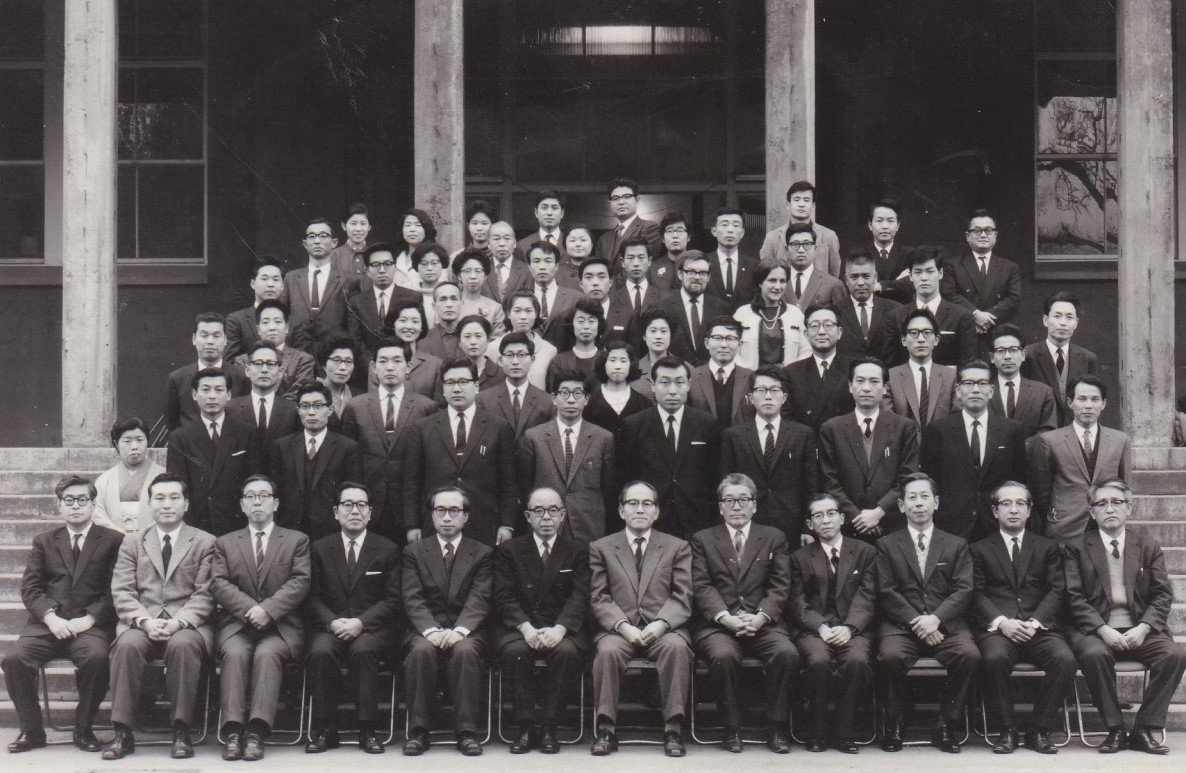 I have also published two monographs, one based on my PhD thesis, the other an account of the British Embassies in Beijing, Tokyo, and Seoul. My most recent publication was Historical Dictionary of the Republic of Korea, 3rd expanded and enlarged edition, which appeared in 2020.

Soon after I retired from the Diplomatic Service in 2003 – we had to leave at 60 in those days – I was asked to cover the leave absence of the history lecturer in Korean studies at SOAS, teaching modern Korean history. Later, I did the same for pre-modern history. I was then asked to establish and teach a course on North Korea, so for five years I taught a mix of senior undergraduates and the occasional postgraduate about “The Other Korea.” The course was well attended and most seemed to enjoy it. All passed!

I have been an Honorary Research Associate at SOAS since c. 1995, and an Associate Fellow in the Asia-Pacific Programme at the Royal Institute for International Affairs (Chatham House) since 2014.

Across your career both in the Diplomatic Service and at SOAS your work has no doubt been impactful. Can you tell us about some career highlights?

Some of my career highlights include being in places at exciting and occasionally worrying times; China in 1976 just after the arrest of Mao Zedong’s widow and others of the “Gang of Four”; Panmunjom on the border between the two Koreas in 1976, a few weeks after North Korean soldiers had killed two UN Command officers in a dispute over a tree; Seoul in 1983 when North Korea assassins tried to kill the South Korean president in Yangon, Myanmar – they failed to kill the president but many others died, including several I knew; Beijing in 1989 during the Tiananmen incident, and organising the evacuation of large numbers from the UK and Hong Kong; and ending my career in unexpected fashion, being asked to open the embassy in Pyongyang – thus at 58, finding myself head of a diplomatic mission operating in virgin territory as far as the UK was concerned.

Other highlights include writing the occasional paper that seemed to make an impact, meeting a wide range of fascinating people in many different countries, and, at SOAS, setting up and running the first-ever university course in Europe on North Korea.

How did your time at Queen Mary prepare you for your career?

QMC and SOAS taught me how to do research, improved my writing skills – further improved in the FCO – and taught me that history matters, as does the need for honesty – all valuable lessons.

What advice would you give current Queen Mary students who are about to embark on the start of their careers?

This is very difficult. Times are very different now. But never give up hope, do not be afraid of going down different tracks from those you had planned or hoped for, and throw yourself into whatever you do. Remember that opportunities do not stop at 21 or 22 – they will open up at all sorts of times. Grasp them!

What are your passions outside of your career?

My children, grandchildren, travel, and cooking.

The pandemic has been hard for a lot of people. What has helped you to keep positive throughout?

I’m not sure that I have kept positive throughout! In many ways, our lives have not changed, apart from not travelling. We would normally go to France six or so times a year, plus other trips further afield. We miss seeing people, attending events, concerts, and the theatre. But we get on well together, and have separate studies to work in. I have written a number of papers, published various pieces and improved my bread and cake making. But like most people, we will be very glad to go back to a more normal life.

If you would like to get in touch with Jim or engage him in your work, please contact Nathalie at n.grey@qmul.ac.uk.