I got to interview former White House staff as part of my masters, which was based on the re-election of Bill Clinton in 1996. My professor Mark White encouraged me to not be afraid to reach out to people at that kind of level. 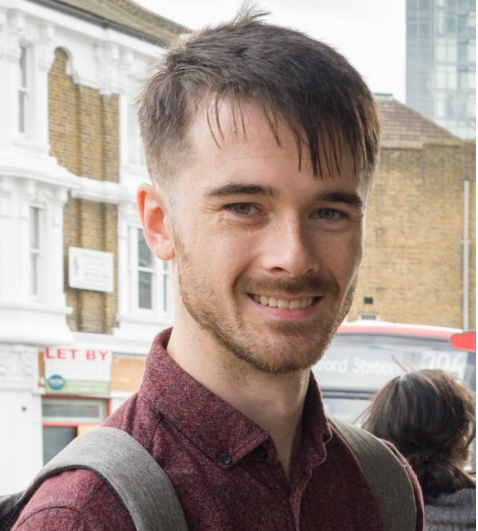 What did study at Queen Mary and what are you doing now? I studied History at undergraduate level and then I continued on to do my Masters in which I focused on American History generally; this was the area I had always been attracted to, particularly the political aspect. I am currently working as a caseworker for Mike Gapes, MP in Ilford South, but since graduating I have had a number of jobs. I have worked as a teaching assistant at a school in Bow for about a year as the plan was to initially go into teaching. I then went onto a journalist type job following American politics for just over two years. I was surrounded by great people at a time when it was really interesting to look at American politics and this then led me to come here with Mike about four months ago.

What did your previous experience with journalism involve? It wasn’t traditional journalism as such; the company was a media planning diary which is essentially a big calendar. My official title was Senior US Researcher and my job was to source the news before it happened. Journalists would subscribe to our service to find out where they would need to be ahead of time. We would aim to have stories a month or two months in advance so that journalists could plan ahead to produce a credible story. An example might have been finding out that Donald Trump was going to give a speech at X event at X time two weeks in advance. There was a real and constant pressure to maintain high levels of accuracy. This role gave me the chance to delve deep into the nitty gritty of American politics; I got to run our coverage of the 2018 midterm elections, which involved looking at individual house races. It was interesting looking at minute districts which on the surface didn’t seem to matter that much, but which did in fact make a big difference to the end result.

Did you ever consider a more ‘traditional route’ having studied History? The plan since sixth form was always teaching; I had a few pleasant experiences in different schools however one longer experience as a teaching assistant put me off. I disliked witnessing the evolution of the said school into a business. Growing up, for me, school was a safe space and I assumed that as a teacher I would be able to project that to my students, but the said school managed to secure investment from a number of well-known companies, which subsequently meant that in terms of staff structure, it became more like a business as opposed to a school. This left me a bit lost in terms of what I was going to do. I had to figure out how I could transfer what I had learnt generally and already experienced, onto a different career path.

What advice would you give to recent graduates who might similarly be feeling lost and might not know what they want to do? Do not feel pressured to take one route; even if you have an end goal, that doesn’t mean you have to take a straight line to get to it. There is the pressure that you have to stick somewhere for a certain amount of time and that if you don’t, it looks bad. There is an element of truth to this, but don’t be afraid to go out of your comfort zone to explore different things. Any experience you have, big or small, will lead to something. It might be a case of meeting someone who can put you on a certain track. I met Reg (another alumnus) on my MA course and we’re still in touch now. His background in business and mentoring has been invaluable to me; he advised me to always aim for jobs in March or October because those are the times that funding is being decided in companies so jobs become available. Endless job applications are soul crushing but you have to power through and realise that everyone else is doing the same thing. Even if you get rejected for a job, remember that it doesn’t necessarily mean that you were not good enough for the job, but sometimes people already have a certain image of someone in their head who would be a fit. Persevere.

Make use of professors. Mark White, who I struck up a good relationship with whilst at Queen Mary, has flagged certain jobs to me in the past. Also, don’t underestimate LinkedIn to narrow jobs down as opposed to job sites like Indeed.

Can you describe what a typical day looks like for you? Usually when I come into the office there are quite a few emails with people flagging issues that they are facing. People think an MP has a lot of power to enact change but a lot of the issues that come to us are instances where the council are not doing what they should be doing. A big issue in this area is housing – the lack of it – our job is to write letters to the council saying X constituent has got in touch with us, this is their situation, can you give us an update on their case. It can be really frustrating most of the time. The victories are so far and few between that they mean a lot when you do get them. My days involve a lot of delivering bad news and dealing with angry people who have come to us as a last resort. However, we do have a good track record with finalising visa applications and we have been trying to organise community events where people can come along to vent and we can pick up more casework. In the lead up to such events I often recruit volunteers to help with the preparation. We also converse with key stakeholders such as the council and the police; for example, we are constantly applying pressure for a higher police presence on the streets to combat the high crime rates in our town centre. There is a darker element which can be a bit of a mental strain as we often have to refer people to get the support they need outside of our office, such as enrolling social services in delicate cases where children are involved.

What is rewarding about your job? No one day is the same. When we get victories they are really enjoyable as you feel like you have made a difference and had an impact on someone’s life. Community events are also rewarding as we get to interact with people face to face outside of our office walls. These events can also be cathartic for members of the public who leave in a completely different mood after having had the chance to interact with people and be listened to.

You are now working in a smaller team, what would you say the advantages are of working in a smaller office? I ask this because I feel like the location of Queen Mary – a stone’s throw away from the city and Canary Wharf – tends to attract people to bigger companies after graduation. You have a lot of responsibility and with that comes greater authority. This has meant that I have learnt more skills than I would have elsewhere in a bigger company. There is also more scope to have greater interaction with key stake holders. You can further get greater validation in a small team as you have a better chance of standing out and progressing onto better things.

Why did you choose Queen Mary? What is unique about Queen Mary compared to other universities? I had decided to commute to university so I had always decided that a London university was for me. With Queen Mary it felt natural, I had a connection. I was also very fortunate to have visited the campus several times on school trips as well as attending the taster days. This connection continued during my studies in regards to fellow students; even though everyone had come from different backgrounds, I felt like we were all on the same wavelength. I also built really great relationships with my lecturers and the office staff. There wasn’t that distance between myself as a student and them as staff – on my undergraduate hand in day, I remember staff and students mingling until after hours at a champagne reception, it was brilliant! Overall, I found Queen Mary really down to earth.

How did your studies contribute to your career and development? From an academic point of view, I had the chance to delve deep into politics which has given me a solid foundation of understanding. I don’t think I would have got my previous job had I not had this foundation. Relationships with fellow and prospective students further aided my development; as a student ambassador for the School of History at open days, I had the opportunity to sit down with prospective students and their families and talk through their issues and concerns. I loved being able to put people’s minds at ease by painting a faithful representation of my time at Queen Mary, a skill that I still use in my current job.

What was so special about your time at Queen Mary? I got to interview former White House staff as part of my Masters, which was based on the re-election of Bill Clinton in 1996. My professor Mark White encouraged me to not be afraid to reach out to people at that kind of level. For example, I was fortunate enough to speak to Clinton’s former press secretary. Another example of why my time at Queen Mary was so special, was due to the events the University hosted – they often attracted leading thinkers and individuals that you wanted to hear from. It is unique that Queen Mary has the power to attract such individuals.

You completed both your undergraduate study and your masters here, what made you stay at Queen Mary? I knew I wanted to stick with American politics so I knew I wanted my advisor to be Mark White. I was also given a scholarship to stay. This element of the University being willing to support students who otherwise wouldn’t have been able to continue their studies due to financial constraints, defined my academic journey. My Masters was amazing, it was the best thing I ever done to help me figure out what I wanted to do long term - a life turning point that would have not been possible had I not had the funding.

Do you have any role models inside or outside of your field? I have always admired the politics of Bill Clinton (not the man himself). His politics were middle of the road, reasonable, trying to appeal to both sides. That’s what I saw within him and that’s what drew me to study his politics further. This is what we yearn for today as we are so polarised; we are looking for someone to draw us together, rather than keep us apart.