Inspired by the lives of the women and men around me, I began the ‘Punchi Actors’ initiative; a non-profit organisation that not only shares my passion with children who love acting, but also gives these children from different financial and social backgrounds the opportunity to build on, and follow their dreams. 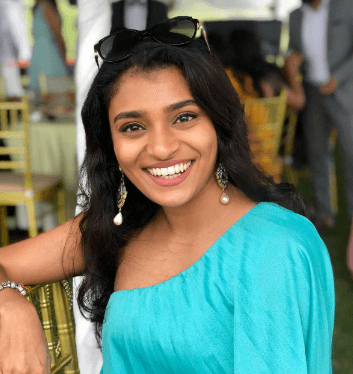 Why did you study Drama at Queen Mary? The Drama programme from the School of English and Drama had an incredible course structure. It covered a lot of areas that I was interested in and the resources offered within the programme were great. Queen Mary is also ranked high in terms of their Drama programme and studying at a campus immersed in London was my dream. Living in the city - the melting pot of theatre - was more than just an experience, it was a dream come true.

What aspects of your degree did you find most enjoyable? What modules did you like learning about and was there anything that surprised you in your studies? I think what I enjoyed most was how multicultural the atmosphere was. I was taught by some great theatre practitioners like Julia Bardsley and Lauren Barri Holstein. My favourite modules were Making Theatre Work, Performance, Sexuality and Identity and Costume Drama. I was surprised at first by how intense theatre and performing arts can actually be. In Sri Lanka I hadn’t been exposed to or learnt any of what I encountered at Queen Mary. I was also surprised that some of our homework included watching plays at the West End. Who is complaining about home work!

Can you describe your career path up to date and touch on your current role and career highlights to date? After graduation I returned home to Sri Lanka. I worked as a journalist and news presenter at a leading local News Network while pursuing my passion for acting in a few television commercials for a brief period. I also worked as a production assistant on the sets of the British TV series ‘The Good Karma Hospital’ season 2. All of these experiences working behind the scenes enabled me to get a valuable insight into what goes into making a production. One of my first highlights was writing, acting and directing ‘Maala’, a short film which went on to screen at a few International Film Festivals. I have also been a part of many theatre productions in Colombo, Mumbai and London.

My big break onto the silver screen came by being selected to play the lead role in ‘Gaadi – Children of the Sun’ directed by Prasanna Vithanage which premiered at Busan International Film Festival in 2019 and subsequently many other reputed festivals around the world. This movie was selected as one of the Best 100 Asian films in 2019. My latest movies playing the lead are ‘Saho’ directed by Professor Ariyratne Athugala, a university based story around student life and ‘Raksa’, an Indian Hindi language film directed by Shubhaleka. I am currently working on a movie for an online streaming platform!

What inspired you to create the non-profit organisation Punchi Actors? What does this organisation aim to do? Where I live, following one’s dreams is not always possible as most people don’t have the resources or opportunities to do so. I believe that everyone, regardless of their background, should have an opportunity to pursue their dreams and I want to be able to share my passion for acting and drama with them. I believe in the motto that ‘we can’t help everyone but everyone can help someone.’

Inspired by the lives of the women and men around me, I began the ‘Punchi Actors’ initiative; a non-profit organisation that not only shares my passion with children who love acting, but also gives these children from different financial and social backgrounds the opportunity to build on, and follow their dreams. I currently conduct workshops specifically for children in orphanages; however, I hope to expand this to senior citizens soon.

How did your time and study at Queen Mary help your career and development? Being in a stimulating and challenging environment such as Queen Mary took me out of my comfort zone – both academically and socially. I was a Student Representative for my course for two years, which helped build my leadership skills. Being a part of the student body and social life of Queen Mary helped me learn more about life than I ever learnt in a classroom. My experiences during my three years at Queen Mary are priceless. They have shaped and curated my personal development and the practical skills I gained have been a foundation for my career as an actress.

How did you find your experience of studying and living in London as an international student? Sri Lanka is home for me. I moved to London as an international student and found a second home in this cosmopolitan city. It’s funny I say second home, because when I first moved to London I was so scared. I cried every night during my first two weeks and I even wanted to drop out! London was an intimidating environment to be in, but looking back, I wouldn’t have it any other way. London moulded me into the person I am today. In a sense, I think I found myself there.

Is there any advice you would give to current students or recent graduates considering their career options? Someone once told me that if you love what you do, you will never have to work a day in your life. So I think it is really important that you find something you’re passionate about. While it is normal for young adults to not know what they want to do in life, especially in the dynamic and diverse world we live in today, selecting career paths that are influenced by your likes and passions is essential. I am a huge advocate for following one’s dreams, even if it means taking risks!

What was so special about your time at Queen Mary? Can you give one or two examples of your most memorable moments? One of the most memorable moments was when we created an ‘intervention group’ as part of our course where we dressed as superheroes and went around campus giving free hugs, free flowers and just making people smile. It was truly touching!

Another memorable moment was after a night out at Drapers with my course mates where we were seated by the cemetery singing and performing “What does the fox say?” to an actual fox!! It’s still so clear in my head and I still laugh when I think about it.

Do you have a favourite spot on campus? If so, where is it and why? Pooley House! It’s the first place where I lived away from home. My tiny dorm room is so special to me because I look back at the young girl I was and think of how much I grew during my time there.

Do you have any role models that you look up to, both inside and outside of your field? As cliché as this may sound, it would definitely be my parents! The opportunities and experiences they have given me and my siblings have been truly priceless and amazing. I’ve been very fortunate to have done everything I’ve done so far in my life and none of it would have been possible without them. If I could one day give these same opportunities to my children then I would have done very well for myself!