I studied my degree as a mature student, so began with some trepidation... However, I soon bonded with the small English & History cohort, the majority of whom were also mature students and I really appreciated that we were supportive of each other. That said the young students were also great to be with, providing me with a different viewpoint. 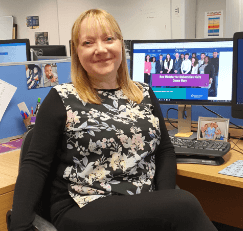 Why did you study English and History at Queen Mary? Having worked in a primary school I aspired to be a teacher. Unfortunately, I did not secure a place on a BEd programme so my Access tutor encouraged me to look at other options and not give up my dream of studying. I loved the subjects of English and history, so looked to securing a place at Queen Mary on the BA English & History course - and was successful. My love of the subjects was definitely formed at secondary school and I still remember researching and writing a history project about the Suffragettes and was amazed and inspired by their story and as a result I have voted in every relevant election. English and history proved the right subject combination for me.

What aspects of your degree did you find most enjoyable? I studied my degree as a mature student, so began with some trepidation. Apart from the Access to Primary Teaching course, I had not studied for a very long time. However, I soon bonded with the small English & History cohort, the majority of whom were also mature students and I really appreciated that we were supportive of each other. That said the young students were also great to be with, providing me with a different viewpoint. With the BA English & History I enjoyed being able to combine my love of history with reading historical novels. The Dickens World and 19th Century Novel were my favourite English modules, but I equally enjoyed the History modules about World War I and Europe Since 1870. I took Cabinet & Premiership and the course tutor, Peter Hennessy, organised trips to Number 10 and the Houses of Parliament, which were fascinating. Overall, I enjoyed stretching my mind beyond what I had previously thought possible.

Why did you choose to study at Queen Mary in particular? Queen Mary was an ideal choice for me. Having lived in the East End all of my life, studying at a local university seemed fitting and above all it had a good reputation. My Mum was happy to hear that I had secured a place, as she had sung in her school choir on the stage of the People’s Palace – and ultimately I graduated on that same stage, with her looking on! Queen Mary was, and still is, a very multicultural community, which reflects the local area and is a great asset. Meeting people from all walks-of-life that I might never otherwise had met was a great experience.

Can you describe your career path up to date and touch on your current role? My career path has been eclectic. I left school in 1978 and went straight into employment at the BBC in an accounts department. I have also worked in a primary school and set up a children’s crèche in a local adult education centre. During my study at Queen Mary I took part in the Clearing Hotline and after graduating I worked in temporary roles in the Academic Registry. I then went onto working in the civil service, in the Cabinet Office and the Food Standards Agency. I returned to Queen Mary in 2003 in the Academic Registry in student records and then moved onto the Admissions Office in 2006 and have been in this role ever since. It is my longest period of employment anywhere since leaving school! I have also enjoyed volunteer roles at the People’s Dispensary for Sick Animals (PDSA), a local primary school and most recently with London’s Air Ambulance. Each of these voluntary roles built upon my skills and I enjoyed giving back to my community.

What were some of the rewards and challenges of being a mature student? I began my studies as a mature student at the age of 35. My personal circumstances had changed and I found myself becoming a single parent to my two young daughters, who were aged 10 and 8 when I became a student. They were fabulous in supporting me even at that young age. I used to bring them to the library with me during Reading Week and school holidays and I think that played a part in my eldest daughter also choosing to attend university. It was a massive challenge to be solely responsible for two young children alongside studying full time, but I was determined to be successful and to be a positive role model.

I understand that you worked here when the decision was made to change the name of the University to Queen Mary University of London, with no mention of Westfield, what were/are some of your thoughts on the name change? Whilst I was working in the Academic Registry the consultation took place about the re-branding of Queen Mary & Westfield College. The intention was to change the name to Queen Mary, University of London to raise our profile. As a member of staff I had the opportunity to give my viewpoint – in short, I was wholly against the change of name. In my humble opinion, removing Westfield from our name removed acknowledgment of the institution’s fabulous history of women in education. I was delighted to see a recent post on Instagram by the Queen Mary Alumni team highlighting Westfield College. My comments about the post led the Alumni Office asking me if I would like to be included in the alumni blog – and here I am!

How did your time and study at Queen Mary help your career and development? When I first decided to study my aim was to become a primary school teacher. However, my change of degree also changed my career path. As a single parent it was not possible for me to take a further year to study a PGCE. Having said that, my study at Queen Mary and my degree led me into higher education administration, which has provided me with a steady career and income and allowed me the opportunity to become the good role model for my daughters that I had hoped. In fact, my eldest daughter followed in my footsteps and is also employed by Queen Mary and is a member of the team in the Academic Registry. Although I never became a teacher I would like to think that I have helped young people in a different way by making them an offer of a place to study here, which starts their journey to a career.

Is there any advice you would give to current students or recent graduates considering their career options? My advice to current students and graduates is to be flexible. Your study may not always take you in the direction you had first thought of. Take every opportunity available to you to broaden your knowledge and skills beyond academia, such as volunteering, becoming a student ambassador or working on the Clearing Hotline, to make you stand out amongst the crowd.

What was so special about your time at Queen Mary? I enjoyed my time studying at Queen Mary immensely. I gained self-confidence, broadened my horizons and discovered an intellectual capacity that I didn't realise I was capable of. I was not a student who was top of the class by any means, so I felt a great sense of achievement when I received a First from one of the most respected history tutors, for an essay for the Europe Since 1870 module. The trips organised as part of the Cabinet & Premiership module were also a highlight of my time here. However, my most memorable moment has to be my graduation – my Mum was so proud, which meant a lot to me.

Do you have a favourite spot on campus? My favourite spot on campus is the Novo cemetery. It as a peaceful spot amongst the hustle and bustle of the campus. I find it fascinating that the headstones represent so many lives and stories and I think it is very important that Queen Mary is responsible for its care. I love when the bluebells are in full bloom amongst the stones, life amidst death is very poignant.

If I wasn’t an Admissions Officer I would love to be… a vegan chef! I love cooking and baking and became vegan in 2016 after being vegetarian for 21 years. I would love to run a little vegan café somewhere.