The key selling point for me was the modular system Queen Mary offered. That was quite rare back then, and it enabled me to take linguistics classes and also marketing classes. I loved learning more about the theory of language, and am very proud of that ‘with Linguistics’ in my degree! 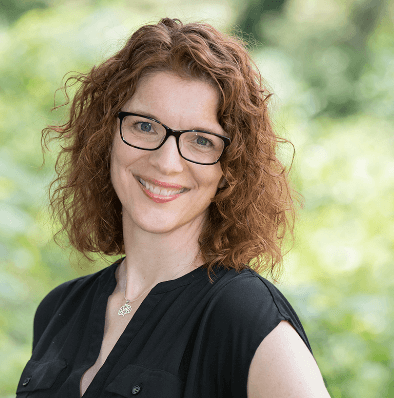 What sparked your interest to study French with Linguistics at Queen Mary? I’ve always loved learning languages and the process of language itself. Don’t get me started on the fascinating journey that English has taken! My mother had a French penfriend for decades and when I went to secondary school and began learning French myself, it was love at first sight. French is a great introductory language, especially if you can learn Latin alongside it, as I did. And who doesn’t love that accent?!

How did your experiences of studying your undergraduate degree in London, differ from your experiences studying your postgraduate English degree in New Jersey (where you now live)? Everything was different! There’s certainly a difference between choosing a university because you’ve been expected to go on to higher education all your life, and choosing to study a master’s when you have two little kids at home, just because you really want to learn! I’d been out of education for ten years by then, and the American literary canon is quite different from the English one, so at times I could literally feel my brain expanding! Then I had to negotiate naptimes to get time to do all the reading. There were a lot of late nights, more than I had at Queen Mary!

Huge congratulations on the publication of your trilogy, the Van Allen Brothers series (published in 2019 by Tule Publishing). How does it feel to be a published author? Thank you! It feels amazing, and terrifying. I didn’t even acknowledge to myself that I’d always wanted to be an author until about ten years ago. Then it was a question of sincerely applying the effort to get those books I had gathering dust into shape, and finding the connections and classes I needed to get better and get published. I’m not brave enough to self-publish, so I needed to find an agent to get into the publishing houses I wanted. It was a long road—and then when you’ve finally done it, you realise you have to do it all again! Luckily my agent is my best cheerleader and thanks to her, I got to release three books last year as well as my debut in 2018, under my pen name, Kimberley Ash.

What have each of your books been about? Is there a common thread that connects them all? My first novel, Breathe, is NOT autobiographical, but it is about an Englishwoman who goes to America and falls in love with an American. She has trauma from her past she has to get over, and he has to learn not to fix things by stamping around like a bull in a china shop. Oh, and someone’s setting fire to his company’s buildings!

The Van Allen Brothers trilogy is a set of second-chance romances, but it’s centred around the long-lasting effects one person’s alcoholism can have on their children. Each brother commits himself to helping others as an antidote, but each feels a level of guilt and shame that means they can’t build their own relationships. Until our sassy, smart heroines show up, of course!

Generally, my novels explore the idea of finding home where you least expect it. I love love stories, but I also love it when the protagonists’ families are involved. None of us live in a vacuum, and the interaction between parents and siblings makes a book more real to me. Sometimes that interaction is good, sometimes it’s bad, and you have to find your family somewhere else.

What is your writing process like? What inspires you? Real life inspires me! It’s true that you can’t beat real life for crazy stories. I like to watch ancestry and long-lost family type shows because they give you raw emotions and uplifting stories that I can use in my books. I also pay attention to what’s going in the news, and I wonder what people on the periphery of those stories are doing. My ears perk up when I hear about an interesting job that someone has, and I wonder what kind of person would do that job, and what kind of person would be the opposite of that, and I put them together!

I have to create a full character profile for my protagonists, once I have a kernel of an idea. I have three pages of questions I ask them, and I have to know what their motivation is before I can direct them in the novel. Writers who are reading this might have heard of the “GMC”—the goal, motivation and conflict for each character. This is a real starting point for me and I can’t move forward realistically until I know what the character wants, why they want it, and what’s stopping them from getting it. The conflict is what moves the story forward, and of course, it’s usually the other protagonist providing the conflict!

When you’re not writing, what can you typically be found doing? I do work at my local library a few hours a week and it’s heavenly, but mostly I can be found driving my teenage daughters around. I also have two big white furry dogs I have to clean up after, but they guard us from the squirrel hoards, so we love them anyway.

Why did you choose to study at Queen Mary? I wanted to be in London, because it’s London! My sister actually went to Queen Mary as well and loved it, so I knew it was a good place to be. The key selling point for me was the modular system Queen Mary offered. That was quite rare back then, and it enabled me to take linguistics classes and also marketing classes. I loved learning more about the theory of language, and am very proud of that ‘with Linguistics’ in my degree!

How did your time and study at Queen Mary help your career and development? I’ve definitely used the marketing classes in my previous career in real estate, and of course any work on language has helped me in my writing! Also, when I moved to the U.S., I did not become one of those expats who complain about the American accent all the time, because I knew where it came from! My English friends will tell you that unfortunately I’ve now picked up the accent myself and I can’t switch it off.

Is there any advice you would give to current students or recent graduates considering their career options? Oh, it’s such a cliché, but follow your passion! I don’t think we’re encouraged enough to really pay attention to the subjects that make us feel happy, that we want to explore further. So we end up floating around doing what we feel we should. I was lucky that I loved French, so it got me through the challenging times. I’m not saying students should just pick a subject and expect the world to provide a career in it, but they should go out there and figure out a way to make money doing what they love. One of my daughters wants to be a writer as well, and we’re encouraging her to take not just creative writing classes, but journalism, history and psychology as well. The more you learn around your chosen subject, the better at it you’ll be.

What was so special about your time at Queen Mary? It has to be the friends I made there. From the first night, when we went to the pub across the street from halls and I found a guy with an All About Eve T-shirt on and forced him to become my friend, to the nights we all spent at the Chirgwin bar, laughing and bonding, to the house we shared in our second year, to all the years we’ve spent keeping in touch since. There’s also my husband, who I met in my second term; I guess I should mention him! He was at the Chirgwin, seeking out British people to talk to rather than the Americans who’d come for a semester abroad and had stuck together in a clump. I think he got more British people than he bargained for! And we’ve been together ever since, despite four years of a long-distance relationship.

Do you have a favourite spot on campus? Well, it has to be the Chirgwin, even though it’s not there anymore. And anywhere we could get inexpensive food!

Are you still in touch with any of your Queen Mary cohort and fellow alumni? Yes! We met up in 2018 for my husband’s 50th birthday party, and I’m happy to say they’re all as silly and wonderful as ever. We’re very different—engineers and lawyers and historians and whatever I am—but we’ve had a connection since those early days in first year.