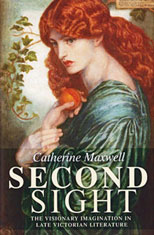 I studied for my undergraduate and doctoral degrees at St Hugh’s College, Oxford. My doctoral thesis was titled ‘Looking and Perception in Nineteenth-century Poetry’, and imaginative vision has remained a key interest of mine ever since, informing two of my major monographs – The Female Sublime from Milton to Swinburne: Bearing Blindness (Manchester University Press, 2001) and Second Sight: The Visionary Imagination in Late Victorian Literature (Manchester University Press, 2008). After completing my D.Phil., I was a British Academy Post-doctoral Fellow at St Hugh’s before I joined Queen Mary in 1993 to teach Victorian literature.

My last project examined the role played by scent and perfume in Victorian literary culture, particularly the period 1860-1900. My monograph Scents and Sensibility: Perfume in Victorian Literary Culture (Oxford University Press, 2017) won the 2018 European Society for the Study of English (ESSE) award for Literatures in the English Language.

I am co-founder and co-editor (with Stefano Evangelista) of the MHRA Jewelled Tortoise series of scholarly editions of Aesthetic and Decadent literature. I am currently working on a new monograph The Flowers of Victorian Poetry, contracted to Oxford University Press.

I have also taught

Victorian Literature, with particular reference to:

In addition to the general interests listed above, I have specialist interests in the poet and critic Algernon Charles Swinburne (1837-1909) and the cosmopolitan critic and writer of fiction Vernon Lee (1856-1935). I have co-edited with Patricia Pulham Vernon Lee’s Hauntings and Other Fantastic Tales (Broadview Press, 2006) and a collection of essays Vernon Lee: Decadence, Ethics, Aesthetics (Palgrave Macmillan, 2006). My recent publications on Swinburne include Swinburne in the British Council series Writers and Their Work (Northcote House, 2006) and the collection Algernon Charles Swinburne: Unofficial Laureate (Manchester University Press, 2013), co-edited with Stefano Evangelista.

In addition to articles on Swinburne and Vernon Lee, I have published essays on Shelley, Browning, Christina and Dante Gabriel Rossetti, George Eliot, Ruskin, Pater, Hardy, Theodore Watts-Dunton, Oscar Wilde, Arthur Symons, John Addington Symonds, and Rider Haggard. My book Scents and Sensibility: Perfume in Victorian Literary Culture was published by Oxford University Press in October 2017. This project was funded by a two-year Major Research Fellowship from the Leverhulme Trust for the period 2014-16.

Online Book Review: ‘Smelling the Past’, on Past Scents: Historical Perspectives on Smell by Jonathan Reinarz, QM History of Emotions Blog (7 August 2014).

My transcription of the British Library MS of Swinburne’s unpublished poem ‘Pasiphae’ was also acknowledged as the basis for the short film and exhibition ‘Swinburne’s Pasiphae’ by the New York artist Mary Reid Kelley, which showed at the Pilar Corrias Gallery, London, 10 September-4 October 2014.

Panel Speaker in Q&A session, after screening of the independent film Sea Without Shore (dir. André Semenza and Fernanda Lippi), Barbican Cinema (5 March 2015). I was also credited in the film’s Acknowledgements (regarding the voicetrack, which features Swinburne’s poetry), and quoted in publicity material for the film.

Public Lecture: ‘Scents and Sensibility: Perfume and Literature in the Victorian Era’, 10 May 2018, Institute of Art and Olfaction, Los Angeles.