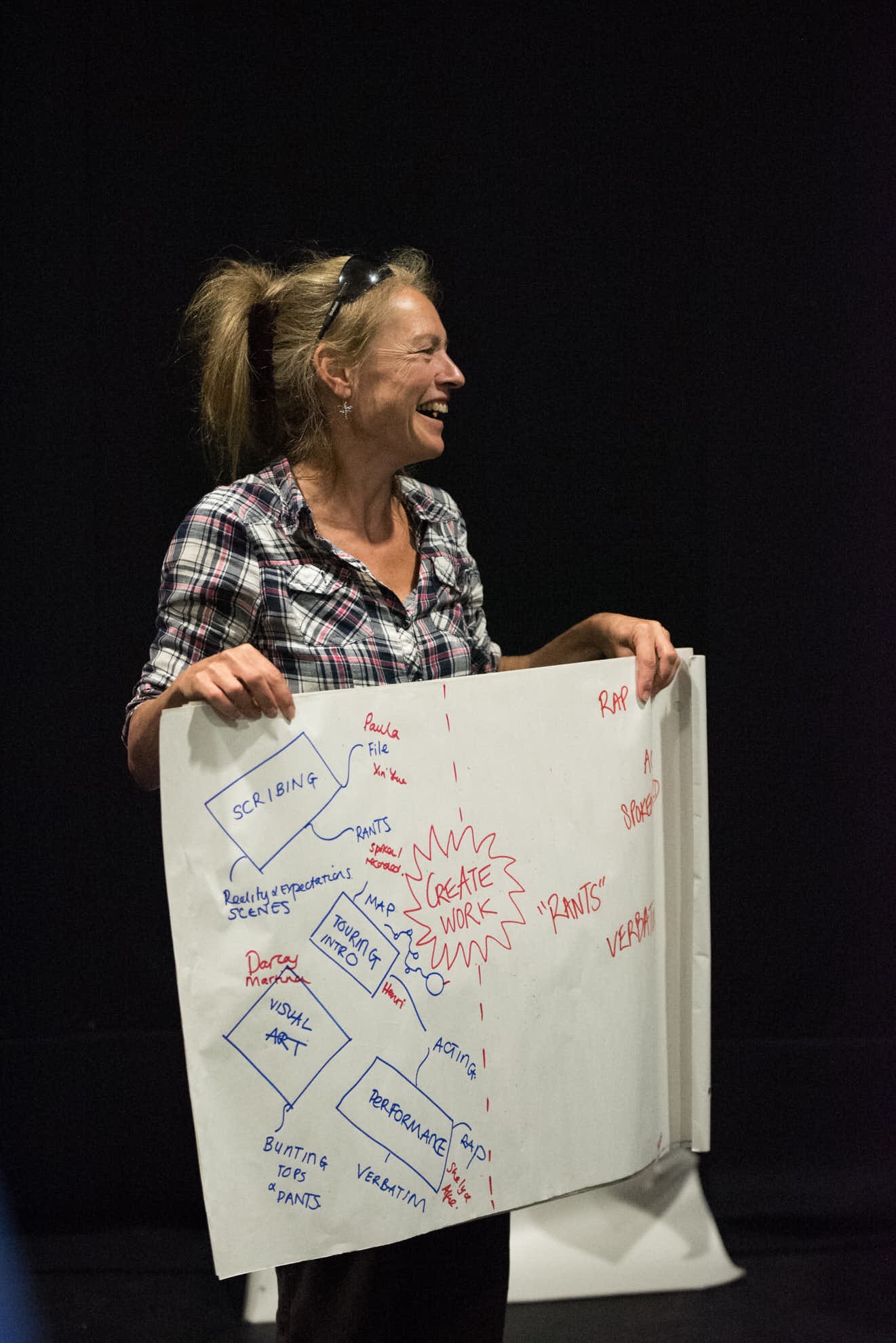 When I was 18, I left the Lincolnshire villages in which I grew up and went to school, in order to go to university to study for a degree in English Literature. I’ve always loved language, stories, poetry and philosophy.

After working abroad in Japan and Mexico, a career in school teaching, and professional experience in directing and dramaturgy, I was drawn back to Higher Education. MA evening classes and a PhD at Birkbeck as a mature student helped me develop my interests in the sounds and powers of voices, as well as in cultural audibility and activism. As an academic and practice researcher, I’ve been able to explore lived experience of voice and listening in participatory and intergenerational contexts, and reflect on how vocal performance can resist and resonate differently.

For me Drama is both a commitment to and pleasure in the subject’s pedagogical and creative powers. It’s a way to speak and sing of and back to the world. It is an embodied way to be and think together.

Amongst other modules, I have taught on:

My research investigates the articulation of identity in contemporary writing and performance. I often focus specifically on the voice, attending to how writers and their processes script voices, how vocal performance is created and delivered, and how audiences hear, listen and respond to voices. In articles in the journal Contemporary Theatre Review and Theatre Research International I have explored the cultural audibility of young people, the ways in which theatre has mediated the identity of women who have killed children, and the performance of testimony of violence against women in globalised contexts. I have also published on voice and language in the work of black British playwrights Kwame Kwei-Armah, debbie tucker green and Roy Williams. My monograph, Voice and New Writing, 1997-2007, uses the idea of voicescapes to understand the ways that voices articulated identity in theatre and politics during the New Labour government.

Recently I have been exploring themes such as the gendered aspects of vocal performance, singing and sexuality, and choral performance.

In practice, I am also exploring how socially engaged performance can provide opportunities for culturally marginalised voices to be heard. My AHRC funded collaborative project, The Verbatim Formula (TVF), with People’s Palace Projects, uses techniques of verbatim theatre to gather testimonies from children and adults with experience of the social care system, aiming to create spaces for dialogue and change. TVF has led to a series of residential workshops for care-experienced young people at QMUL and three other London universities. Its research is participatory, and action-oriented, working with young people as co-researchers. See more about TVF in the Public Engagement section of this profile. 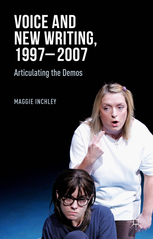 ‘The Verbatim Formula - Caring for Care leavers in the Neo-liberal University’, in Research in Drama Education (RiDE), 24.3 (2019)

‘David Greig and the Return of the Native Voice’, in Transnational Identities in David Greig’s Plays, edited by Anja Müller and Clare Wallace (Prague: Litteraria Pragensia, 2011).

I am currently supervising doctoral work on:

In my work at Queen Mary I work with different groups of people as a teacher, researcher, practitioner and collaborator.

Young People and the Care System 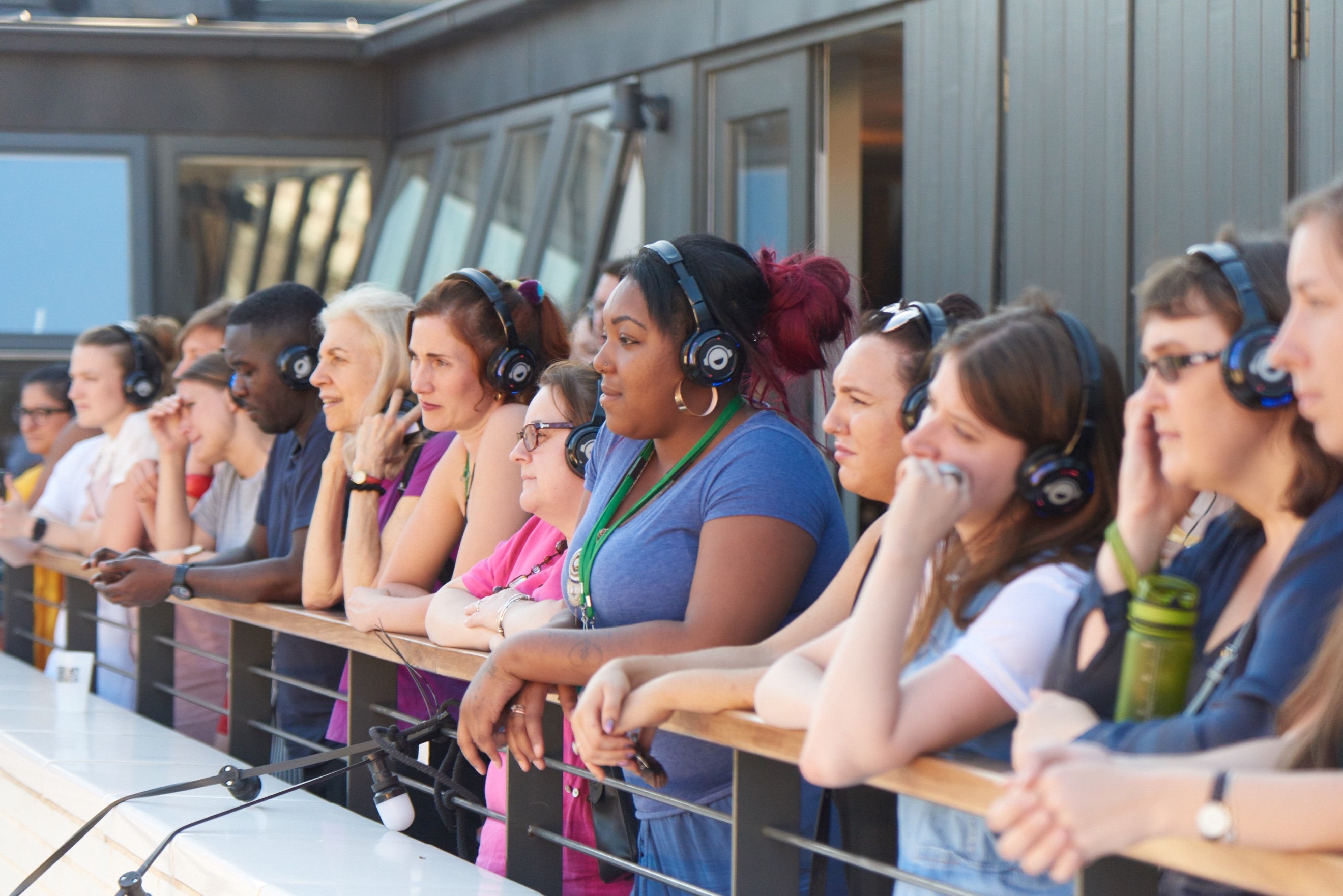 Since 2015, I’ve been leading The Verbatim Formula, a participatory research project that works with care-experienced young people. It uses verbatim theatre techniques, listening and dialogue to work with young people, care leavers, social workers, and universities. This has involved holding arts workshops for young people at university and in arts venues, and a ‘Portable Testimony Service’ that aims to help adults listen to young people better. We have performed at a range of contexts including the Department for Education, the Office for Students, and City Hall.

Read more about The Verbatim Formula on its dedicated website: http://www.theverbatimformula.org.uk/ 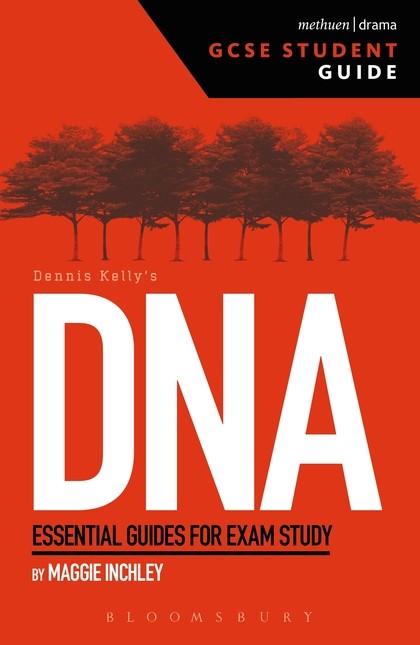 I am a great believer in Drama as a form of discovering the world, and as a research method in itself. During my time at Queen Mary it has been a great pleasure to give talks and workshops in schools and youth theatres on doing Drama at university. I also share my work on verbatim theatre and new writing in masterclasses on Verbatim Theatre and Dennis Kelly’s DNA, which is on the English Literature GCSE syllabus.

I am currently working with QMUL PhD student and artists Vanessa MacAulay on a schools writing workshop which updates George C. Wolfe’s The Colored Museum (1986), and thinks about cultural identity in a Black Lives Matters world.

My teaching and research has led me to collaborate with a wide range of artists and arts organisations in a variety of ways, from co-convening modules, to holding joint events, and in arranging placements for students at Queen Mary. These collaborations have included Battersea Arts Centre, People’s Palace Projects, Phakama, Moving Pieces, Dash Arts, Magic Me, Fuel, Camden People’s Theatre and Duckie.

In the lockdown of 2020 I co-led a workshop for students in lockdown in campus with feminist artist Cassie Thornton on our workshop un-Clocking.

I work closely with Half Moon theatre on QMUL’s Drama and Education module for final year undergraduate students.

In addition to my academic work I am also a practitioner, working as a director and dramaturg. I am co-Artistic Director of the Comedians Theatre Company, which has been producing work with the major Edinburgh Fringe venues since 2005. In 2014, I developed four comic dramas under the title Making the Best of It with BBC Radio Four. My on going collaboration with the Pleasance Islington, Itch: A Scratch Event has led to the development and production of new theatre and comedy, including the Fringe First winning Somewhere Beneath it All a Small Fire Burns Still by Dave Florez, and Cul-de-Sac by Matthew Osborn, which was also performed at Theatre 503. Another current piece, Here Today explores my interest in voices, which are mixed, distorted and echoed immersively through the exterior performance space.

The Verbatim Formula: Performances of the TVF Living Archive at Inside Out Festival, Being Human Festival at the Wellcome Trust, and QMUL Professional Services Conference, 2015-7.

Teabags in the Fridge, Dementia Sufferers Short Films (development and director), Arc Research and NHS England Choices. These short films aimed at carers of dementia sufferers are being used for training in hospital trusts, councils and care homes across North East England, 2015.

Making the Best of It (Literary Development), BBC Radio Four, 2014.

Itch: A Scratch Event (Convenor, Dramaturg and Director), The Pleasance, London. This is an on going new writing and performance project.

The School for Scandal, by R.B.Sheridan, (Adaptor and Associate Director), The Pleasance, Edinburgh, 2009.