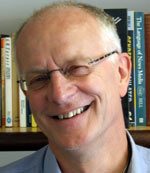 I was born in Scotland and went to school and then University in Glasgow, where I read English and Philosophy. I wrote a D.Phil on Hazlitt and Coleridge at Oxford, and became a Junior Research Fellow, then a Lecturer, at Balliol College. After a year and a half teaching at Nottingham, I returned to Oxford and worked there for a decade. I was a Professor at Southampton for five years before finally settling in Queen Mary in 1996.

My research is primarily on Enlightenment and Romantic thought and literature. I am particularly interested in the relations between literature, philosophy, and political theory. I have also written on critical theory generally and the transitions between modernism and postmodernism. My most recent monographs were Metaromanticism (Chicago, 2003) which explored historical transformations of the Romantic aesthetic, and Coleridge and German Philosophy: The Poet in the Land of Logic (2007). My last book was on European Romanticism – Realpoetik: European Romanticism and Literary Politics – which compares the writings of some major German, French, and Italian Romantics with an eye to their differences from British Romanticism. My edition of the Oxford Handbook of European Romanticism was published in 2016.

Coleridge and German Philosophy: The Poet in the Land of Logic (London: Continuum, 2007)

‘Leopardi and the Logic of the Romantic Fragment’ (January 2011), Read now