From 2009-2014 I co-convened the Contemporary Fiction Research Seminar at Institute of English Studies with Dr Tony Venezia at Birkbeck, University of London. The series hosted guest speakers and panels to talk across a range of fields, and convened skills workshops for PGRs and ECRs. See Researching the Contemporary for an archive of materials.

I have also taught:

I research representations of digital media in literary and popular culture. My first monograph explores what I term, ‘the digital banal’. The digital banal describes the way we encounter new media as already boring, and so are unable to engage with the novelty of our mediational everyday lives. In this project, I consider realist/reality narratives of contemporary life lived with digital technology, and work to recover the novel conditions of becoming-with technology latent in otherwise banal everyday occurrences.

My interest in literature and new media has also led to a series of Leverhulme/BA funded workshops, co-organised with Dr Sam McBean (QMUL) on “Mediating Contemporary Literature”, which took place in the academic year 2016/17.

My current research is thinking about the user-subject in digital culture. I am particularly looking at representations of hackers and users in popular culture, and the modes of relationality, autonomy, and political agency afforded, and attached to, these figures. 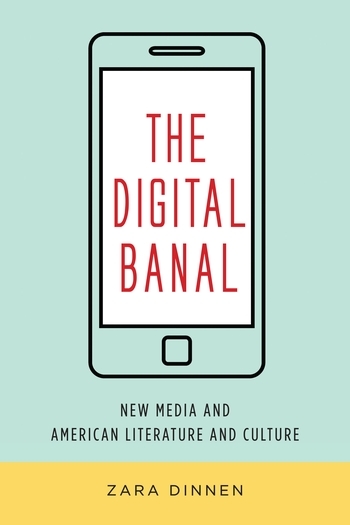 Winner of the BALCS 2017 Monograph Prize

‘Breaking out that Perl Script: The imaging and imagining of code in The Social Network and Catfish’. European Journal of American Culture. 32.2 (2013)

‘In the mix: the potential convergence of literature and new media in Jonathan Lethem’s ‘The Ecstasy of Influence’’. Journal of Narrative Theory. 42.2 (2012)

ScarJo’s Face: A Mediation on the Digital’, In Media Res (2015) http://mediacommons.futureofthebook.org/imr/2015/01/20/scarjos-face-mediation-digital-image