I work in the medieval and early modern areas, especially on traditions of English verse writing, and with a particular focus on Chaucer and fifteenth-century literature. I came to Queen Mary after studying at Newnham College, Cambridge and then the Centre for Medieval Studies at York, where my D.Phil. thesis was on late Middle English verse manuscripts.  A book about The Manuscripts of English Courtly Love Lyrics in the Later Middle Ages (Boydell and Brewer, 1983) grew from that work; and an edition of Fifteenth-Century English Dream Visions: An Anthology (OUP, 2003) developed from it. My long-term interest in the  material aspects of literary production has recently involved research into the early intersections between manuscript and print, and on the compilation and transmission of local chronicles.

In recent years I have worked more extensively on Middle English verse manuscripts, on the relationship between manuscript and printed production of texts c. 1475-1530, and on late medieval London texts and readers.  As the fruit of periods of externally funded leave I have published A New Index of Middle English Verse (with A. S. G. Edwards; British Library, 2005), a book on Manuscript and Print in London, c. 1475-1530 (British Library, 2012), and a co-edited Companion to Fifteenth-Century English Poetry (Boydell and Brewer, 2013). I am currently investigating the activities of the chronicler Rober Fabyan, and editing his account of life in London during the reign of Henry VII. I remain interested in lyrics and with Christiania Whitehead have recently co-edited a collection of essays, The Middle English Lyric: New Approaches to Short Poems (forthcoming from Boydell and Brewer, 2018). 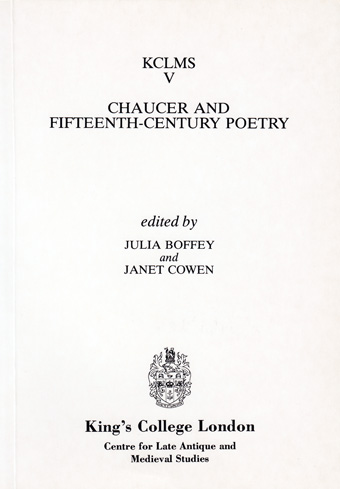 ‘The Kingis Quair and the Poems of Bodleian Library, MS Arch. Selden. B. 24’, in A Companion to Early Scottish Poetry, ed. Priscilla Bawcutt and Janet Hadley-Williams (Woodbridge: Boydell and Brewer, 2006), pp. 63-74

‘Chaucer’s ‘Fortune’ in the 1530s: Some Sixteenth-CenturyRrecycling’, in Studies in Late Medieval and Early Renaissance Texts in Honour of John Scattergood: ‘The Key of All Good Remembrance’, ed. A. Fletcher & A.-M. D’Arcy (Four Courts Press: Dublin, 2005), pp. 53-64

I have supervised PhD theses on later medieval verse and prose, especially Chaucer and post-Chaucerian writing; on medieval manuscript anthologies; on textual production in London; on medieval lives and their documentation and representation.