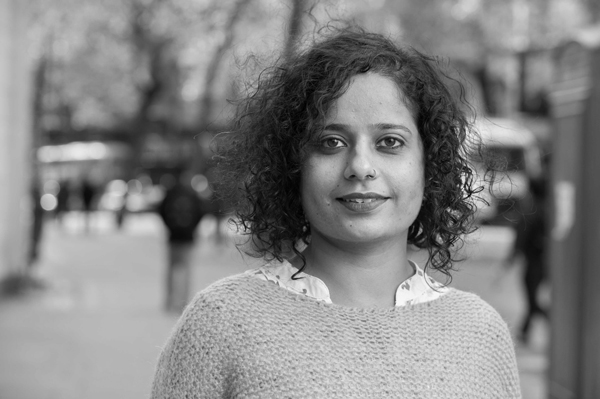 My work engages with the intersections of performance and visual culture, feminist theory, Black studies, and dramaturgies of urban life. Across my research, writing, and pedagogy, I am concerned with how different forms of performance and artistic production challenge colonial histories, epistemologies, and their corresponding debris.

Prior to joining Queen Mary, I worked as Lecturer at King’s College London and spent a rewarding time in South Africa as Andrew W. Mellon postdoctoral fellow at the Centre for Humanities Research and Women’s and Gender Studies Department, UWC. During 2011-13 and 2018-21, I co-convened the Performance in Public Spaces working group of the International Federation for Theatre Research.

Supported by Mellon foundation, I am working on my first monograph that looks at the relationship between urban performance practices and public spaces in Delhi in the context of the rise of ethno-nationalism in India. The case studies explore how performances on the streets respond to the neoliberal project of urbanisation and restructuring of the city by the Indian government, while navigating the dynamics of class, caste, gender, sexuality, and religion. I organised several international research events on related themes during my tenure as a co-convener of Performance in Public Spaces working group of the International Federation for Theatre Research.

Alongside, I am co-editing a book on pluriversal conversations on transnational feminisms. This is the culminating output of a long-term project with colleagues from the Universities of Linköping, Bergen, Budapest and Western Cape, which is funded by the Swedish Foundation for International Cooperation in Research and Higher Education. The essays, interviews, fiction, poetry, and short reflective pieces in the volume offer creative and critical ways of understanding, writing, and teaching transnational feminisms.

I am part of two ongoing interdisciplinary projects with colleagues from UWC, South Africa. The first one, Doing Academia Differently, focuses on race, exclusion, and geopolitical asymmetries in Higher Education. Following the #RhodesMustfall and #FeesMustFall movements in South Africa and urgent calls to decolonise Eurocentric curricula and research agendas, the project engages with transdisciplinary methodologies, Indigenous knowledges, slow scholarship, the Undercommons, and the political ethics of care. Situating the ongoing Decolonise the University movement as part of broader social justice struggles, I wrote ‘A manifesto to decentre theatre and performance studies’ (2021), published in Studies in Theatre and Performance journal.

The second one, New Imaginaries for a Critical Humanities Project on Gender and Sexual Justice, is directed at challenging dominant forms of scholarship and pedagogy related to sexualities and gender, particularly as shaped by the last few decades of responses to high rates of HIV infection and gender-based violence in South Africa. Along with a team of researchers from South Africa, we explore how different forms of activism, performance, and visual art disrupt and destabilise everyday gender and sexual injustices. As part of this project, I examined the celebration and visibility accorded to #MeToo movement in Euro-Americas when Alyssa Milano tweeted about it in 2017 to highlight how it overlooks the localised histories of feminist struggles in the Global South. Book chapters on the topic are forthcoming/published in Injury and Intimacy (Manchester UP) and Performing #MeToo (Intellect).

I would welcome enquiries from potential doctoral students interested in related areas of research: