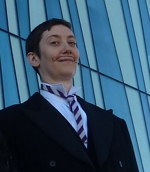 I arrived at Queen Mary in September 2012, having previously taught English and Creative Writing for 8 years at Anglia Ruskin University. Before that I was a Junior Research Fellow at Homerton College Cambridge, having completed my PhD in 2001 at King’s College Cambridge where I researched the literary uses of physics in the 1920s. I received an MA English Literature from the University of Sheffield in 1998 and a BA Combined Studies from the University of Manchester in 1996. Outside of Queen Mary my interests include cricket and East Asian healing arts. I am a trained trade union representative for the University and Colleges Union, with a focus on equalities. My preferred pronoun is they / their.

My first book, Loving Faster than Light: Romance and Readers in Einstein’s Universe (Chicago, 2012) explores the uses of Einstein’s theories of relativity in literary and popular culture in Britain during the 1920s and 30s.

I have a moustache, funded by the Arts and Humanities Research Council, which has featured in performances of Edwardian technology and Victorian telepathy statistics.

I am currently writing a book about prophetic dreams from the 1880s to the present, focusing on the evolving relationship between mass media, dreams and whiteness in the harvesting and narration of dreams that come true. This project is returning me to an interest in Social Anthropology which comprised a third of my BA Combined Studies.

‘Monogamy and the Next Step? William Empson and the Future of Love in Einstein’s Universe’, in Versions of Empson, ed. Matthew Bevis (Oxford: Oxford University Press, 2007), pp. 242-263