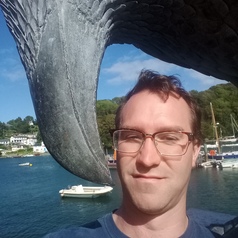 This is my seventh year at QMUL. Previous to coming here, I taught at UCL for six years, where I completed my doctorate, which contributed to the Leverhulme-funded ‘Bloomsbury Project’. My doctoral work explored the role of fiction in the social production of Bloomsbury, a neighbourhood that in the long nineteenth century was imaginatively transformed from social marginality to cultural and intellectual centrality. Before this, I studied at Magdalen College, Oxford. My research addresses literature from the nineteenth century and the first half of the twentieth century, often focussing on the politics of urban and coastal space. I live in Camberwell, but was born in Plymouth and lived in Cornwall for my first two decades.

I serve on the editorial board of the London Journal and the advisory board of QMUL’s City Centre.

My first major phase of research addressed the interaction of cultural representation and materiality in the spatial production of the London neighbourhood known as Bloomsbury, over the course of the long nineteenth century. It explored the way this locality became culturally recoded in this period, from a place of socio-economic marginality to an autonomous centre of intellectual endeavour, through the interested mediation of literary writing. Writers I addressed in the academic monograph that emerged from this work included the critically neglected 'Silver-Forks' (Theodore Hook, Catherine Gore etc), but also much more well-known figures, such as William Thackeray, Charles Dickens, Anthony Trollope, Mary Elizabeth Braddon, William Morris, and Henry James, plus a number of ‘New Women’ novelists, before considering the geographical interventions of Virginia Woolf, who moved in 1904 into what was already an exceptionally culturally mediated part of town.

Building from this account of a particular place within the city, my current project addresses the way space becomes increasingly conceived of as ‘contestable’, as the British cultural democratizes in the mid-nineteenth and early-twentieth century, towards 1945. Within this field of cultural historical research, particular topoi on which I’m concentrating include rent contestations between landlords and tenants, the role of railings in producing exclusion in the city, and the friction that arises as a result of the democratization of leisure in Margate.

My reviews and other shorter pieces have appeared in The Conversation, Times Literary Supplement, Urban Pamphleteer, Literary London Journal, Review 31, The Junket etc.

I would welcome enquiries from potential doctoral students interested in literature and culture from the long nineteenth century, and, in particular, the politics of space.

Dickens in a Crisis (2020) –  I recently made this 24-min film, now on Youtube, with illustrator and artist Alex Brenchley, to address a general public. Marking the 150th anniversary of Dickens’s death, it addresses the question of why we might want to read Dickens in a year like 2020, which is characterised by seemingly perpetual crisis.

I fairly frequently give talks or lead (literary-themed) walking tours, for the general public. Partners I have worked with in the past include the Being Human Festival, the Inside Out Festival, the Courtauld Gallery, Persephone Books, and Bright Club. In recent years I have annually led a new, specially themed walk

Further talks to the general public include: