In the third part of our series showcasing the research of members of Queen Mary’s Intellectual Property Research Institute (QMIPRI) we focus on Dr Noam Shemtov, Reader in IP and Technology Law. 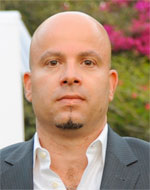 Dr Noam Shemtov joined Queen Mary in September 2009 as a Lecturer in Intellectual Property and Technology Law. He is currently a Reader in IP and Technology Law and Deputy Head of CCLS. Dr Shemtov lectures in areas of intellectual property, creative industries and technology and these are also his research interests.

Dr Shemtov has led research several high profile projects and studies funded by UK Research Councils and by industry, national, supranational and commercial organisations including Microsoft, the UK’s Department for International Development (DFID) and Commonwealth Office (FCO). More recently he led a project for DFID/FCO on the Establishment and Operation of a Specialised IP Court in Ukraine. He is a qualified solicitor both in the UK and in his native Israel.

“I think the intersection between IP and technology. In 2016 I worked with a group called CreativeWorks London on a project called BeatWoven which created textile patterns which were translated from sound and music. In essence, the outputs were a visual representation of song in the form of a fabric pattern. There were legal hurdles to clear and as a result of my advice, we were able to take an idea to fruition. It was a complicated process, there were both pre-existing copyright and trademarks related to music needed to accommodate this innovative business model.

“The work with BeatWoven really pushed boundaries. Fear of legal barriers has put people off being daring and creative in the past and this showed that with the right legal advice and business model, it’s possible to create a new, thriving business and take this around the world.

“I have also done a lot of work on AI assisted inventions and worked with the European Patent Office and I presented my findings in this area to their General Assembly. I have also worked as an expert for WIPO – the World Intellectual Property Organisation. I would say that one of the most rewarding aspects of this has been the opportunity to support real businesses around the world.”

“Over and above all the prestigious research projects and studies that I have worked on, which led to important and impactful findings, it must be seeing my graduates in the ‘IP in the Creative Industries’ course occupying top positions in global law firms and organisations, and the contribution that this course made to their career progression. It’s very rewarding to see people that you once nurtured grow and develop into experts in their respective fields.”

“Going back to the BeatWoven story, even as an experienced practitioner, I was surprised to see how quick and profound the impact that my work with BeatWoven had on its business prospects and success. While I had little doubt that this work would make a difference, the speed and extent to which this difference occurred was surprising. I am really pleased to play a role in this unique business model which is still going strong today.”