The Matter of Objects: Setting up a collaborative exhibition

The Matter of Objects exhibition brought together artists and history students to create a public exhibition exploring the meaning of objects. In their first blog post the organisers discuss their motivations and how they brought the exhibition together.
Published:
6 April 2017 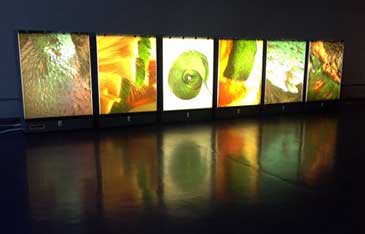 Written by Ella Kilgallon and Hannah Lee, PhD Students at the School of History

The Matter of Objects was a pop-up exhibition and discussion event that took place in May 2016, bringing together artists and humanities scholars in a collaborative discussion about the role that objects play in our understanding of history.

Increasingly the humanities have recognised the value of objects within historical narratives yet approaches to the material often remain stifled by the abstract ways in which they are approached. In the words of social anthropologist Tim Ingold, the engagement of historians with the material is ‘not with the tangible stuff of craftsmen and manufacturers but with the abstract ruminations of philosophers and theorists.’

As organisers we were interested to see what insight contemporary artists and makers could provide into our perception of the material past through their own practices, and how a public audience would respond to modern artistic interpretations of medieval and renaissance objects. The origins of the project were rooted within our own practice as researchers. Both of our PhD projects deal with material sources, and we were interested in the idea of applying interdisciplinary methodologies to bring fresh perspectives to our own work as historians. Further to this we were keen to explore how artistic interpretations of historical objects could be used to engage a wider audience with current research, and make the apparently distant past more tangible, immediate and relevant within contemporary conversation.

We sent out a call for applications in early January, using Twitter and the mailing lists of universities and art schools. After reading through the applications, we paired together 8 humanities researchers with 8 contemporary artists. Over the next couple of months each pair discussed an object selected by the researcher for its centrality to their work. Using these discussions as their starting point, the artists then produced an artwork of their own to be displayed in our temporary exhibit in May 2016.

We were delighted by the large number of applications we received when the project was advertised as we felt this demonstrated that our project had relevance within the current interest for interdisciplinary partnerships. It was fantastic that we were able to involve academics not only from universities all over the country (QMUL, Cambridge, York, Birmingham) but also internationally from the University of Versailles Saint-Quentin-en-Yvelines in France, the European University Institute in Florence, and Monash University, Melbourne.

From a curatorial point of view we were keen to display the work of artists working across diverse mediums. Partly for the different expertise they would bring to the discussion, and also for the visual variety that would engage visitors to the exhibition: 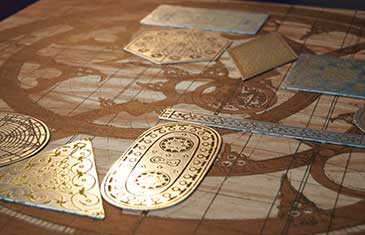 'Containment' by Susan Eyre, based on the research of Bruno Martinho

The artist Elinor Cantrill, responded to the oldest object in the project (an eighth-century ivory plaque of the Last Judgement, selected by Meg Boulton) using the contemporary medium of video to explore the original panel’s narrative in her piece The Ivory.

A fall-fronted Portuguese cabinet selected by Bruno Martino inspired Susan Eyre to inlay spices in her intricate etching plates- a reference to Lisbon’s global trade – in Containment. The use of spice added another dimension to the object, as visitors were encouraged to enjoy the different scents held within the etchings.

The beautifully twisted form of ceramicist Elena Gileva’s piece, in response to a sixteenth-century French candlestick depicting Saint Sebastian (chosen by Anne-Clothilde Dumargne), evoked the torture of the human figure and the metal finish of the original object.

Such diversity of materials and techniques we hoped would capture the imagination and intrigue of our visitors.

When promoting the exhibition we identified that our target audience was museum professionals, practising artists and gallery/museum audiences. Having decided to hold the exhibition at Bart’s Pathology Museum we also aimed to attract visitors who were keen to view the medical collections. Our chief methods of promotion were through Twitter, and printed posters, which we distributed around key locations in London such as libraries, university campuses and museums.

We were fortunate enough to receive funding both from the Centre for Renaissance and Early Modern Studies and the Centre for Public Engagement to ensure that we could make these artworks accessible to as wide an audience as possible.

To find out about the next steps, including bringing the participants together to discuss their experiences and the exhibition itself check our blog again next week.