The Love Machine: Exploring the Neuroscience of Romance at the Science Museum, London

Do opposites attract? Do the opinions of friends and family matter? Are arguments a healthy part of a relationship? As part of the Science Museum's Pride Late in June, David Saunders, supported by a CPE Small Grant, produced the Love Machine: a series of immersive audio-visual performances to share his research into the history of attempts to answer those questions. 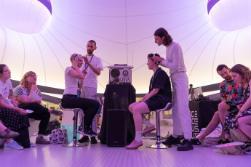 On a stiflingly hot June evening, a robotic voice rings out in the usually hushed spaces of the Winton Mathematics Gallery. “Statement 1,” it begins: “First impressions are the best indicator of the success, or failure, of a relationship.” Among the crowd gathered underneath the gallery’s glowing, otherworldly canopy, a ripple of awkward laughter breaks out. Knowing glances and elbow nudges are exchanged; mortifying meetings are recalled in whispers. Yet one couple, encircled by visitors, remain silent. In the absence of shared anecdotes, a surge of piano and strings can be heard, and splashes of colour fill up the screens behind them.

This was the Love Machine: a series of immersive audio-visual performances which took place at the Science Museum, London, on 27 June 2018 as part of the Museum and Pride in London’s Sexuality Lates event. Based on laboratory research into the neuroscience of romantic compatibility conducted during the 1950s, the performance involved recording a couple’s brainwave patterns using electroencephalographic (EEG) headsets and transforming them into music and visuals. Throughout the performance, the couple were presented with a series of statements about love and relationships (Do opposites attract? Do the opinions of friends and family matter? Are arguments a healthy part of a relationship?) which altered their brainwave patterns, in turn transforming the audio-visual output. Visitors were given 1950s-style computer ‘punched cards’ to record their own responses to these statements as well as their broader perceptions about the role of technology in mediating our love lives.

The Love Machine was the product of a collaboration between me, a PhD student at Queen Mary’s Centre for the History of the Emotions, and Sam Hatchwell and Geraint Morgan, two artists from Peckham-based audio-visual collective A House In The Trees. The initial idea for the project emerged from work undertaken as part of a six-month Wellcome Trust Secondment Fellowship at the Science Museum, during which time I had been working with the archival documents and historical objects of the Burden Neurological Institute, Bristol, where this initial research had been conducted. While the Burden’s reputation was primarily forged through its pioneering work exploring the anatomy, functions, and disorders of the human brain, its fame was also bolstered by researchers’ unusual experimental projects and their surprising connections to avant-garde artists interested in human consciousness, ranging from William S. Burroughs to Aldous Huxley.

Tasked with increasing public awareness of the Burden’s work, I began searching for an opportunity to revive the Institute’s legacy of scientific and artistic collaboration. While scouring the archives, I came across a press cutting from a 1956 edition of Life magazine, which excitedly reported on the potential applications of the Burden’s EEG research programme to romantic and marital conflicts. Such breakthroughs, the article predicted, meant that it was only a matter of time before couples could have their brainwaves tested for compatibility, thus avoiding any future heartache. Thinking that this research could prove a rich source of creative reinvention, I approached Sam and Geraint - with whom I have collaborated previously - about the possibility of creating an installation based on the EEG’s supposed powers of romantic insight. Colleagues at the Science Museum suggested that Lates would provide a perfect venue for such a project, with patrons eager to be presented with new ideas in unusual and engaging formats.

The themes explored in the Love Machine installation more broadly resonated with my own PhD research. My thesis examines the participation of marginalised communities in medical research in Britain during the Second World War, and how these experimental experiences were used to construct an alternative sense of acceptance and belonging in wartime society. As such, I am particularly interested in how laboratory spaces – often thought of as cold, sterile, and rational environments – can become invested with great emotional significance. Therefore, the idea of using a machine to ‘logically’ determine matters of the heart was one I found intriguing. Such ideas also chimed with the concerns of the Centre’s Wellcome Trust Collaborative Award, Living with Feeling, which examines the history of ‘emotional health’, providing yet another dimension to an exploration of how science might be deployed to settle emotional conflicts in daily life.

Over the course of the evening, we estimate that approximately 300-400 visitors saw at least some part of The Love Machine performance, with around 200-250 visitors remaining for the full duration. Through analysing punched card responses, we were able to gain several intriguing insights about the ways visitors responded to these complex issues of love, desire, science, and technology. For example, 88% of visitors who completed punched cards expressed some change of opinion relating to the role of technology in aiding romantic relationships after viewing our performance. Of these visitors, an overwhelming 90% indicated that they were less likely to trust technology with their love lives, compared to just 10% who expressed an increased level of trust. Subsequent conversations with visitors suggested that the performance was successful in encouraging critical conversations about the unstable boundaries between emotion and science, and the potential limitations of using machines to evaluate the success or failure of romantic relationships. Indeed, as one visitor noted on their punched card, when it comes to matters of the love, “what do [we] mean by ‘success’ or ‘failure’” anyway?

My artistic collaborators and I are now hoping to develop the Love Machine project further by considering how to open up the installation to the public and make it truly interactive. At this current stage in its development, it was not possible to allow members of the public to become ‘test subjects’ themselves, as producing strong audio-visual outputs required prior familiarity and practice with the equipment. While we designed the punched card system to ensure that visitors felt personally invested in the outcome of the performance, many people expressed disappointment that they themselves could not have their brainwaves analysed. As such, we have discussed the possibility of developing learning algorithms that can adjust to new users’ idiosyncratic brainwave patterns in a matter of minutes, thus getting rid of the need for prior rehearsals. This more direct form of participation could empower visitors to consider more deeply these questions of love and technology by showing them audio-visual interpretations of their own mental processes.

The Love Machine team would like to thank the Centre for Public Engagement for their support of the project, as well as the Science Museum, the Centre for the History of the Emotions, and the School of History for their guidance and encouragement. Finally, we would like to thank the brilliant visitors of Lates for their time, enthusiasm, and openness – not to mention their graciously-offered stories of romantic disaster and triumph.

For more information, go to:

A House In The Trees (https://bit.ly/2vxsGWV)

Centre for the History of the Emotions, QMUL (https://bit.ly/2stKKyU)

If you're interested in taking your research to a Science Museum Late, come and speak to the Centre for Public Engagement team. Small Grants will open on 15 September.