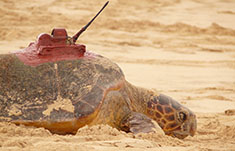 Written by Dr Christophe Eizaguirre, Senior Lecturer in Organismal Biology at the School of Biological and Chemical Sciences.

Who nowadays has never heard that biodiversity on earth is threatened? Mainly due to human activities, we are losing species at an unprecedented rate. But what does that mean? Simple! Except in museums, we will never be able to observe those species anymore. Some of them have even disappeared before we got to understand their life history.

For those who are not convinced that we need to protect species for the sake of protecting them, we should never forget that species provide important services to humans. Marine turtles, for instance, are the gardeners of sea grass beds which, like lawn grass, needs to be cut short to be healthy. Marine turtles also bring a large amount of nutrients to beaches: with those nutrients, the dune vegetation grows, becomes healthier and stronger helps to hold the sand in the dunes and protect the beach from erosion.

Despite those important roles, marine turtle populations are decreasing. There remain only 7 species of marine turtles, all of them in the red list of endangered species from the IUCN.

In order to develop new science-based conservation programs, we have decided to focus on the loggerhead turtles nesting in the Cape Verde archipelago, off-shore of the Senegalese coasts. The choice of this location is not only associated to the beauty of the country. There, we find the third largest nesting aggregation of this turtle species in the world. However, the loggerhead is threatened by various direct menaces such as poaching and by-catch by large industrial fishery boats. Until 2008 and before the establishment of many NGOs, up to 1/3 of the nesting turtles were found dead, killed by poachers. In addition to those threats, more indirect menaces associated to coastal development, global warming, pollution and associated increased risks of disease are to be feared. Educational programmes and robust scientific monitoring of the Loggerhead turtle has therefore become a crucial necessity to identify future directions of conservation efforts.

Our research follows two major angles: identify the movements of the turtles and evaluate the genetic diversity present in the population. While the first one will ultimately help us defining new marine protected areas, the second one informs us on the long term viability of the population and sudden changes which could happen. (Find out more about the research below)

Because the Cape Verde University students of today are the decision makers of tomorrow, we have decided to focus our training effort on them. Our philosophy is that when they will reach decisive positions, their understanding of the importance of sustainable ecosystems will help them designing appropriate conservation programmes. How does that work? With each field season, a growing number of Cape Verde biology students are joining our team for a specific three-phase training. Firstly, they receive a theoretical training to modern conservation biology. This includes lectures on state-of the art molecular and tagging tools. Secondly, a hands-on practical training follows. For several nights, the students join our team to patrol the beaches and learn how to mark the turtles, screen for parasites and diseases and collect DNA samples. To be fully honest, this training is entirely bilateral: many of us have learned from the experience those students have from living in Cape Verde and interacting with those phenomenal animals for decades! 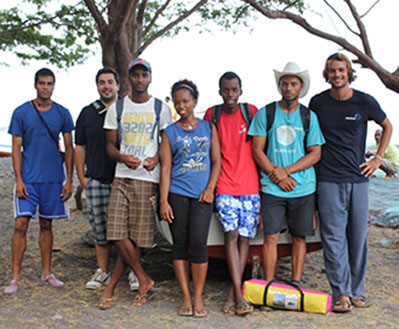 Once the training finished the most interesting phase commences. The students will then disperse to different islands to join local conservation groups. There, they integrate the local communities and contribute to awareness programmes and turtle monitoring - based on their newly acquired knowledge. Using this approach has multiple advantages: not only no language barriers exist but also it allows standardizing protocols at the scale of an entire Archipelago. This becomes crucial when it comes to making decisions based on scientific information. Our “conservation ambassadors” are invaluable source of inspiration for kids and for us. Their motivation is limitless and work ethics is amazing.

Lastly, we are grateful to all the national and international NGOs working with us and preparing incredibly efficient conservation campaigns. While in many occasions NGOs and scientists face each other with conflicting visions, we have created a large network of partners with one common goal: saving the turtles. Yes, we can!

Find out more about the research

Firstly, we use satellite-relayed information to track the whereabouts of the turtles. To date, we have deployed 24 different devices which are set on the back of the turtles and record locations. Depending on the device, we can track the “lucky-turtles” up to 3 years. Each time a turtle comes to breath at the surface of the ocean, a GPS location is sent to a satellite and transferred to our database. With this information, we could confirm that while it seems that all females swim away from Cape Verde once they have nested, some adult males remain in Cape Verde. This information is important to define new marine protected areas.

Even though some devices help us to understand the movement of adult turtles, there remains a massive knowledge gap of the whereabouts of the hatchling – the baby turtles. Once they hatch, the baby turtles will crawl towards the sea and disappear during the “lost years” before reappearing up to 30 years later! What do they do during this period? how do they swim away?

To address those questions, we use physics! More specifically, we use physical ocean models which help us understanding the possible trajectories of the baby turtles based on the different ocean currents. Here as well, the ultimate purpose is to be able to discover where the baby turtles swim in order to decrease pressures associated to fisheries.

The other angle of our research deals with monitoring the population. Our first study aimed to identify whether the Cape Verde rookery consists in one very large population or a series of smaller populations nesting on each island. You could wonder why this matters. In conservation biology, there is one limiting factor: money. Because the money available to protect species is not infinite, it is important to know whether we can focus on one location which supports a large number of turtles or whether the efforts should be split over multiple locations. Using genetic tools, we identified that each island in Cape Verde supports a specific turtle population. This means that even the places with few nesting turtles should be protected and not ignored to focus on larger nesting populations.

We also use genetic tools to understand one of the most surprizing animal behaviours: philopatry. Hatchling turtles will enter the ocean and disappear for 30 years BUT, after this period, they will return to their place of birth. Why? Why entering a journey long of 30 years and over 3000kms to ultimately return home? There are probably two reasons. Firstly, if all individuals come back to their place of birth, they maximize the likelihood of meeting a mating partner compared to finding one in the open ocean. Secondly, by coming back to their place of birth, the turtle maximize their offspring’s survival by passing on beneficial genes. For instance, we showed that females on the different Cape Verde islands have different immune genes which are associated to increased resistance to local diseases such as viruses or bacteria present in the sand.

Altogether this information allows us to monitor the important genetic diversity present in the population which may decrease with decreasing population size. We can thus track the evolution of the population and hopefully anticipate major population collapse to better define conservation program.

The science-led conservation project was funded by a Centre for Public Engagement large award in 2014. For more information on this and other successful applications in that round you can view the award summaries here. For news of other internal funding rounds by the CPE visit our webpage.