Rhythms of the Heart

Heart & Music explored the connections between music and heart rhythms. The organisers, Elaine Chew, Professor of Digital Media at QMUL’s School of Electronic Engineering and Computer Science, Pier Lambiase, Professor of Cardiology at UCL and Barts Heart Centre, and Peter Taggart, Emeritus Professor of Cardiac Electrophysiology at UCL reflect on the challenges, aims, and highlights of the event:

Heart & Music, the experimental public engagement event at the intersection of music and cardiology, took place at lunchtime on Monday, 11 June 2018, at St. Bartholomew-the-Great Church in West Smithfield, London. The event began with a short introduction to arrhythmia research by Prof. Pier Lambiase and Prof. Peter Taggart, followed by a concert of music made from stolen rhythms, including from the heart, performed on the piano by Prof. Elaine Chew.

The public engagement event was part of a larger study on Cardiac Response to Live Music Performance, a project led by Profs. Chew, Lambiase, and Taggart on the theme of heart-music-brain interactions. The study seeks to better understand how emotions alter the electrophysiology of the heart, focusing on emotional triggers of musical changes and transitions. Patient volunteers with biventricular pacemakers or ICDs were recruited for the study. The devices were re-programmed to single-lead pacing and the other lead used to record electrical activity from the left side of the heart whilst participants listened to live music performance. This study will be  featured as part of BBC World Service’s Health Check programme later this summer. 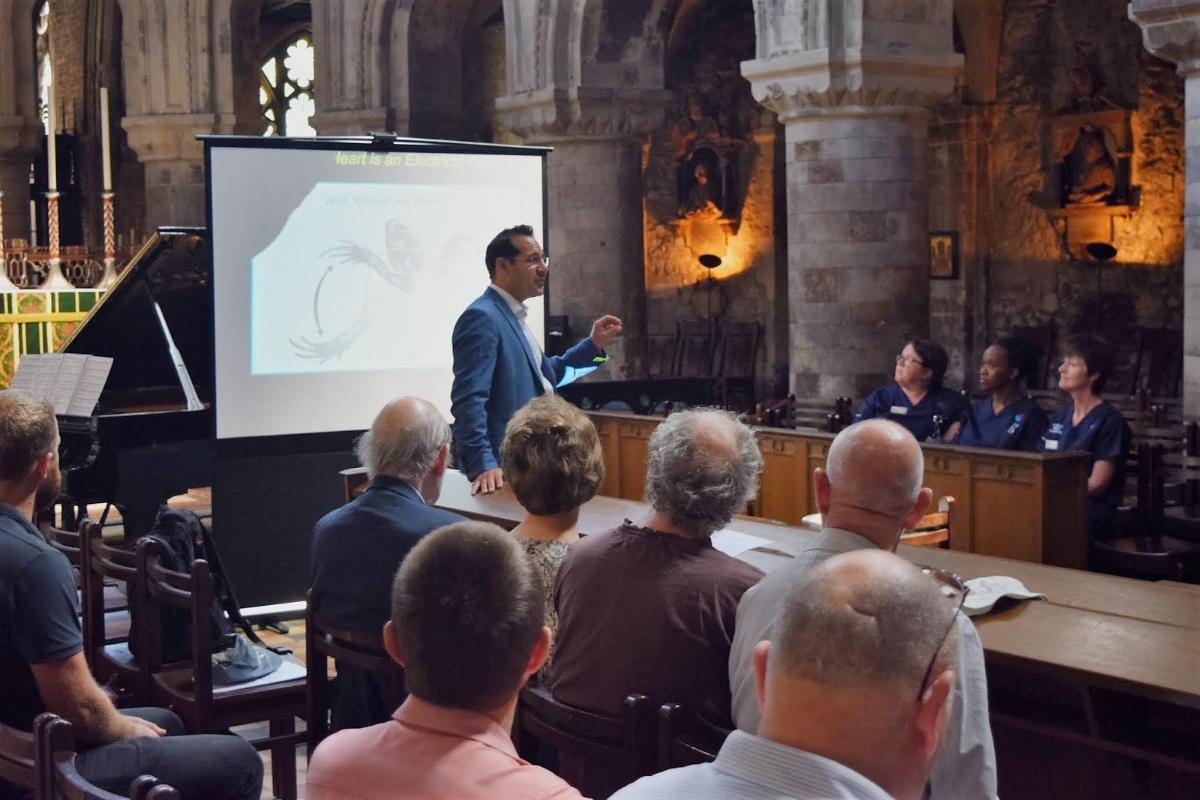 The public engagement event had two main aims. The first was to introduce the public to cardiac arrhythmia: the research itself, and the experiential side of what it feels like to be in a state of arrhythmia—this was accomplished through the music based on rhythms taken from ECG traces of arrhythmia. The second was to make people aware that music induces stress (as in musical tension) through expectation and through sudden changes, amongst other things. The association between music and stress may not be an obvious one as there is far greater societal focus on music inducing meditative and calm mental states. 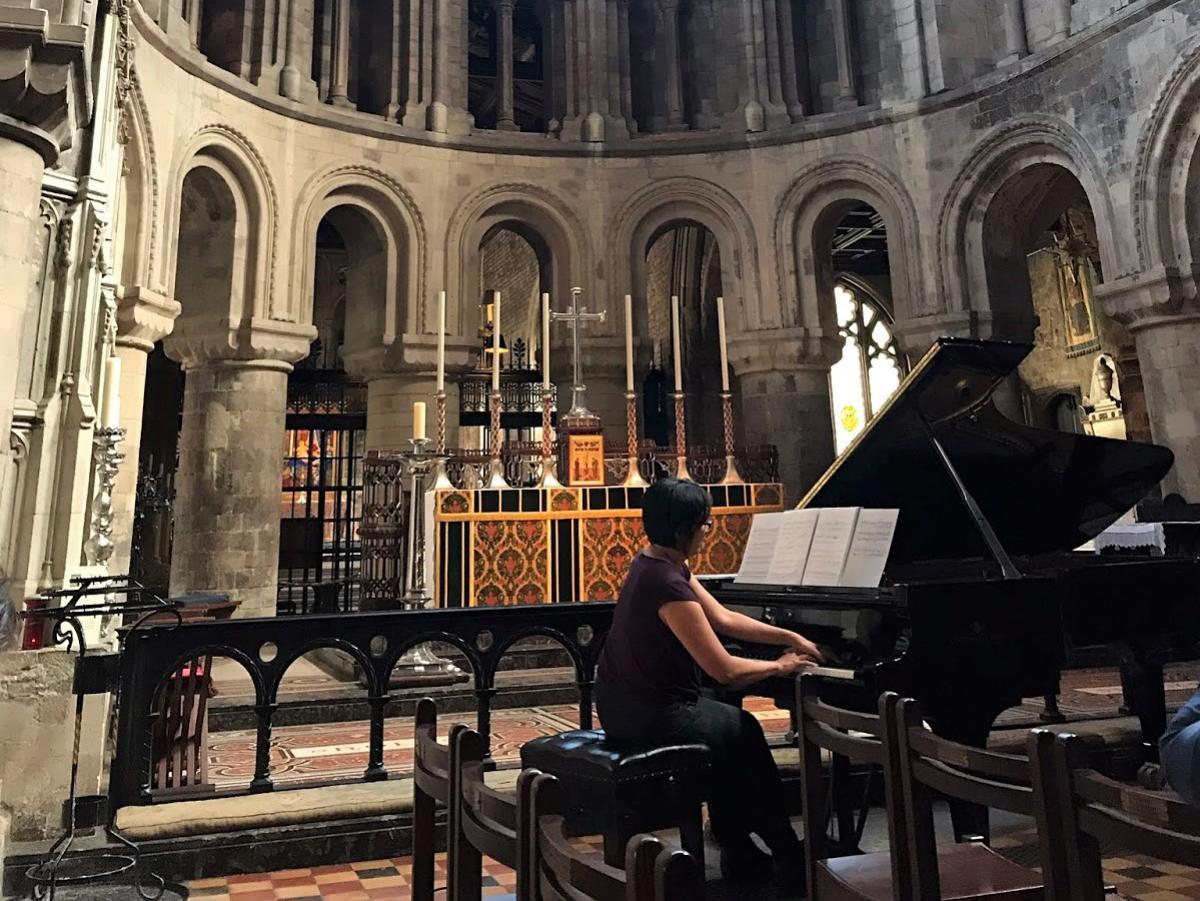 We faced a few challenges in the preparation for this event. First, was the ethics approval for the larger scientific study. Thanks to expert advice from Dr. Manish Saxena and help from Jack Biddle, we successfully navigated the IRAS proportionate review process in record time. The second challenge came in the form of finding a concert venue near Barts, which was solved with the help of Dr. Paul Edlin. Finally, one of the musicians in the originally planned piano trio was diagnosed with cancer weeks before the concert and required emergency surgery. An alternative plan was hatched, which led to the concert of music with stolen rhythms.

Highlights include the people who came to the event, members and affiliates of the Barts Heart Centre and Queen Mary University of London, and random visitors to the church. To our surprise and delight, an Australian Professor of Cardiology contacted the team and flew from Sydney for the day to attend the event and to discuss pulses and harmonics. Two of the PPI (Patient & Public Involvement) volunteers who helped review the Participant Information Sheet for our IRAS application also attended the event and sent lovely feedback:

“I found the whole hour extraordinary: I didn't realise just how much energy was used or how exhausting [arrhythmia] could be - it just took my breath away and left me wrung out with hardly a breath left! I almost hurt. But then again, when you played your last piece it was just like heaving a big sigh, sitting back and coming home. Wonderful. Thank you so much for such an unexpected hour.”

"... we were treated to a talk by Professor Lambiase  about the fascinating work he and his team [were] doing on the heart and the electrical signals he was now able to map using his 'vest'  and he had some excellent graphics to show us.

The music was played by Elaine Chew and to call her maestra of the piano is not sufficient to describe her wonderful performance. The last piece she played was spellbinding containing as it did  the most powerful rendition I have experienced in live performance followed by the most gentle, delicate finale. It made me realise that I had not been to enough live performances ..."

A Barts Charity collection was set up, and the volunteers sent thoughtful feedback:

"... people found the event very engaging and thought-provoking."
"… your connections with the people who came along really show through."

Recordings of the talk and performance at Heart & Music can be viewed at http://bit.ly/heart-music-recordings

Missed the concert? Heart & Music will take place in QMUL's Octagon (Mile End Road, London E1 4NS) at 1PM on Tuesday, 20 November 2018, with an interactive workshop at 2:30PM-3PM. This is the first event of the Keyboard Evolution series, part of Being Human Festival 2018. Admissions is FREE.