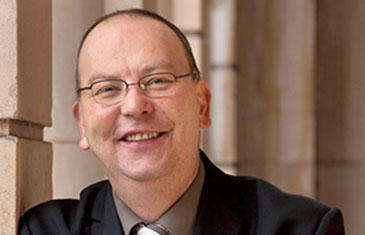 Our latest blog post reposts an interview with Professor Peter McOwan, QMUL's Vice-Principal for Public Engagement and Student Enterprise and a Professor of Computer Science in the School of Electronic Engineering, Here he talked to our QMUL People team about his public engagement and how it feeds into his research.

You’re a talented magician. How have you incorporated this into your teaching and public engagement work?

I was a keen amateur magician from when I was a child. It was magic that first got me really interested in mathematics, because there are all sorts of fascinating maths-based self-working tricks. A pack of cards is very similar to a computer memory. Cards are data; there are 52 pieces of information that you can move around, and when I looked again I recognised there are algorithms I knew from my research work that were directly analogous to the workings of those card tricks. Seeing that blend justified all those hours I spent practising card tricks and studying science!

Magic captures the attention – we’ve all seen that through the work of magicians like Dynamo and David Blaine. A while ago, I realised I could teach some basic computer science and mathematics by using magic. I select an ‘ethically farmed’ trick – one that is very well exposed or one I have come up with myself. I would never break the magicians’ code for a trick that isn’t in the public domain, but I do bend the magicians’ code – for educational purposes only.

I show the audience an effect, and then ask them how they think it works, encouraging them to enquire and be curious and imaginative in their responses. Then I would explain how the trick is done and how its principles link into actual research. As an example, there’s a classic mind-reading trick that uses exactly the same mathematics in a part of it as are used in computer tomography, which is a medical technique for taking scans through the human body. That makes a nice link so people can understand that maths has real-world applications as well as learn some mathematical magic party pieces.

These shows have turned out to be very successful. They attract kids to a presentation that wouldn’t otherwise come to.  Instead of three computer science enthusiasts, you get a whole year group coming along and it helps quell the discontent from the maths naysayer. They leave the show with tricks they can do to impress their friends, based on real mathematics, and it helps maths look cool.

We have gone on to do a whole series of projects around this, starting with the CS4FN (Computer Science for Fun) magazine. The Magic of Computer Science book has been translated into Italian, German and Welsh. The Manual of Mathematical Magic is a kit with packs of cards and magic booklets. Each has tricks built into the packaging. This has been very popular and the books can be downloaded from the web for free.

I continue to work with other magicians, developing books around magic and school curriculum maths. I also work with Matt Parker, QMUL's stand-up magician-cum-mathematician and we do a series of mathematical magic shows.

Tell us about some of your other enquiry-based learning projects.

This work feeds into my role as coordinator of a large EU project called Teaching Enquiry with Mysteries Incorporated (TEMI). This is a really effective way to get school teachers interested in using enquiry-based learning.

We present pupils with a mystery, be it magic or myth, which cannot be easily explained, and pull them into understanding the science which lies behind the mystery. We have been running this across the EU in teacher training colleges, using magicians and actors to teach teachers to present and tell a good story to great effect.

How do you manage all of this with your role as VP for public engagement?

I find the challenges interesting and complex, trying to find the right balance between academic leadership and research. In this job, I believe I need to be a good role model who can juggle research and teaching, while still practicing public engagement.

I have been lucky to be supported institutionally, first by Professor Adrian Smith and now by Professor Simon Gaskell. They have encouraged me to take ideas and see them through to fruition. It’s hard work, but most of the time the fun is worth the slog. Having a great team at the Centre for Public Engagement has been vital. Once that was set up, it has made my job much easier. Oh, and having a great project manager for EU research projects and enthusiastic PhD students and research assistants is vital too!

Blog based on an interview by: