As the Science Museum prepares to celebrate ten years of Lates, Emily Pickett (Marketing and Communications Officer) shares her experience taking a team of students from Queen Mary’s School of Mathematical Sciences to August’s Lates to share the Maths behind magic tricks and a mysterious plastic computer. 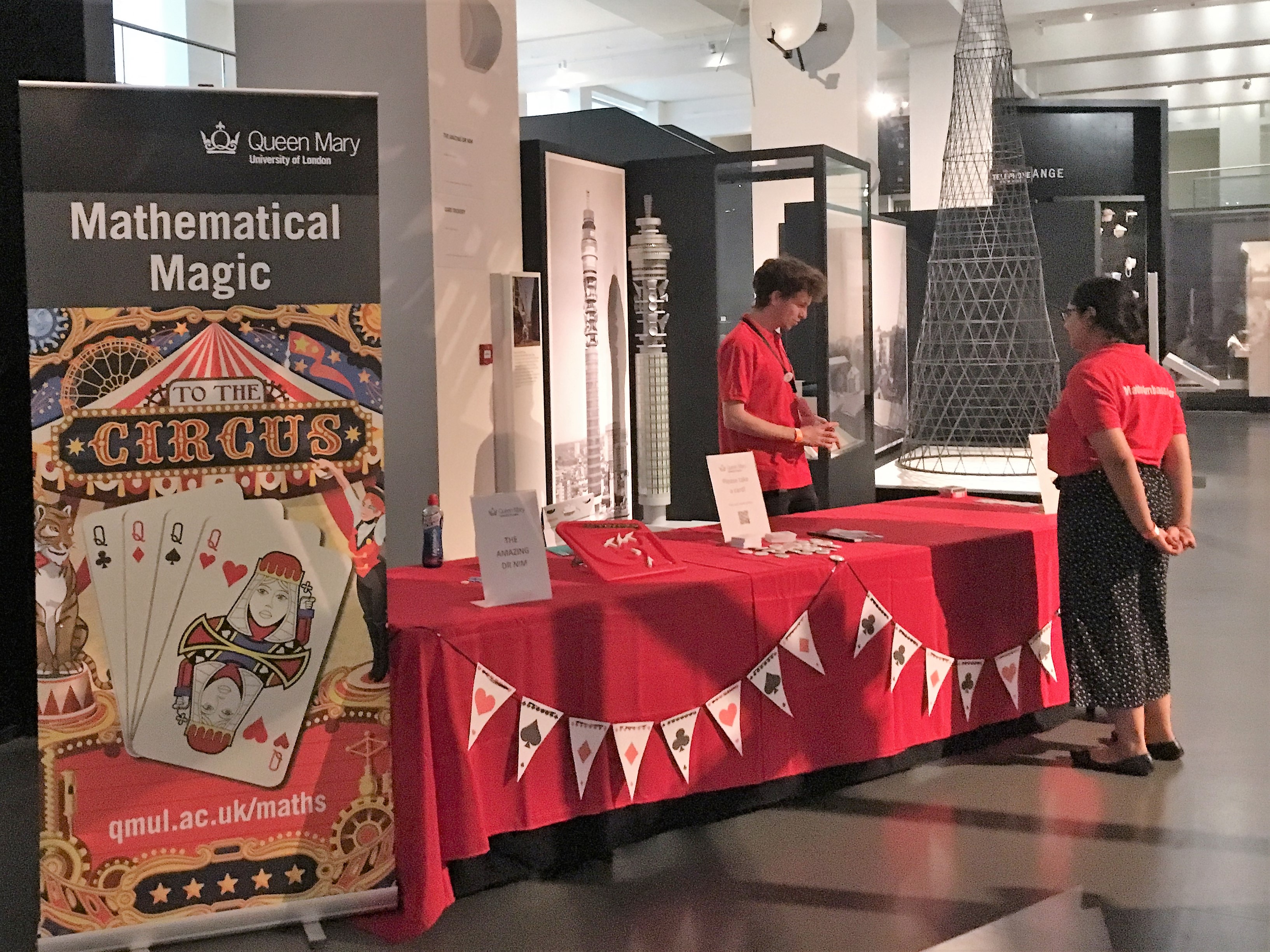 A conversation with Katherine in the Centre for Public Engagement introduced us to the prospect of Science Museum Lates – we’d been looking for more opportunities for our School to engage with public events, and this sounded like the perfect chance to get people talking about maths in an informal setting.

Looking at the list of themes for the monthly events, we instantly had ideas for the Circus night, and working with our Public Engagement in Mathematics Fellow and resident ‘stand-up mathematician’ Matt Parker, we designed two drop-in events based around the theme of ‘Mathematical Magic’. One session would introduce guests to the simple maths behind playing card tricks, including the 27 card trick. The second would challenge Lates guests to take on Dr Nim, a marble-powered computer from the 1960s, an unassuming piece of plastic used to play the mathematical game of Nim.

Neither activities require prior experience in maths and are accessible introductions to an area called Combinatorics, the study of finite or countable discrete structures - one of our School’s major research areas.

One of the best things about the night was the number of people we were able to speak to: we were one of many stands up on the second floor, but there was a constant flow of guests and over the course of three hours over 350 people stopped to engage with us. The main challenge of the night was finding a gap in conversations for our exhibitors to escape and take a break!

The up-close and informal nature of the drop-in events meant that lots of conversations were sparked from guests’ initial engagement with the activities – we had all kinds of questions about other applications of the maths involved as well as related combinatorial games, and the relaxed atmosphere of the event really helped to facilitate this.

Given that Lates is a Science Museum event, most people we spoke to had an interest in science, but the range of maths experience among our guests really varied. Ben Smith, PhD student in Combinatorial Geometry, spent the evening sharing card tricks with hundreds of guests, teaching them the simple combinatorial calculations they’d need to be able to repeat the tricks themselves. “The thing that hit me was the spectrum of people we spoke to. Quite a few people said they hadn't done any maths since they left school, but some were doing their undergrad - or even PhDs - in maths. Often the people who worked out what was going on were the people who hadn't done any maths for years!”

The whole process was easy to manage from start to finish, thanks to the well-organised team at the Museum and in the Centre for Public Engagement, as well as Queen Mary’s established links with the event. We’d definitely recommend the opportunity to other Queen Mary departments hoping to bring their work to a new audience.

This academic year we’re hoping to build on the success of Lates by applying to the CPE’s small grants programme and taking part in a range of other public engagement events, including June’s Festival of Communities.