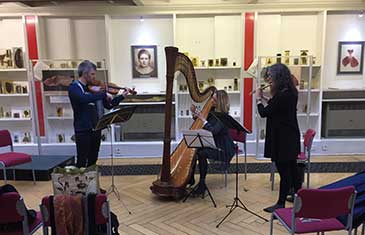 Written by Helen Stark, Project Manager at the Centre for the History of the Emotions

Late afternoon on a Monday in early October and my steps up the stone stairs to Barts Pathology Museum are accompanied by the ethereal sound of a harp, flute and violin. The music swells and pulses as I grow closer and I tiptoe through the doors to the sight and sound of the Harborough Collective rehearsing.

The museum is softly lit, the musicians framed by a semi-circle of chairs, and the backdrop is very striking indeed: behind them are human-tissue specimens and watercolours showing various human pathologies. Awe-struck by the visual impact of the space, I also felt both excited and peaceful by the music…how would the audience feel in two hours time?

Lisa, David and Eleanor (the Harborough Collective) were rehearsing for the first collaborative event between the Centre for the History of the Emotions, the QMUL Director of Music (Paul Edlin) and Barts Pathology Museum. We wanted to investigate how listening to music might affect wellbeing and how prior knowledge of the music being played affects emotional responses. 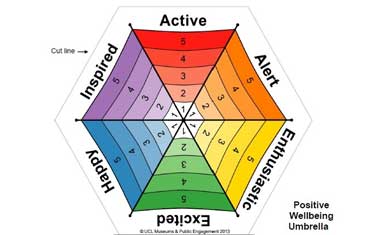 To do so, Paul and the Harborough Collective had designed a special programme of music and I had come armed with wellbeing umbrellas (pictured) and questionnaires. We would ask the audience to complete a wellbeing umbrella at the beginning and end of the concert, enabling us to trace change in wellbeing across the event, and the audience would record their emotional responses to the music at the end of each half on the questionnaire.

The umbrellas were designed by UCL as part of their UCL Museum Wellbeing Measures Toolkit. I had originally planned to use a mood adjective questionnaire but I found it difficult to locate the right resource and because I knew the National Alliance for Museums, Health and Wellbeing had been doing a lot of work in this area, including designing and evaluating toolkits for measuring wellbeing, I turned to their website for guidance. Here I found the toolkit designed by UCL which included the umbrellas. I chose them because they came with specific guidance about how they’d been developed and about how to analyze the results. They are also attractive and unusual and I thought audiences might therefore be more willing to complete them.

I designed the questionnaire myself and it asked respondees to tick the emotions they felt during each piece of the performance (or add their own) and respond free-form to the question of whether the venue had impacted their experience of the music.

We chose this method as it combined prescripted responses with free-form which would enable us to gather data that could be easily compared across the audience whilst retaining the opportunity for the audience to respond in their own words. This was really valuable as lots of participants wrote around the emotions they’d ticked, explaining why they’d done so and I suspect they felt liberated to do this because we’d provided space for them to add their own emotions/emotional states and say how the space had affected their response to the music.

In the first half, the audience would know nothing about the music being played; their responses would be shaped only by the performance, the space, and any prior knowledge they might have. In the second half, they’d be introduced to the concept of the history of the emotions and its relationship with music by researcher Dr Marie Herzfeld Schild. Dr Herzfeld Schild would also tell the audience about the music they had already heard and what they would hear in the second half. 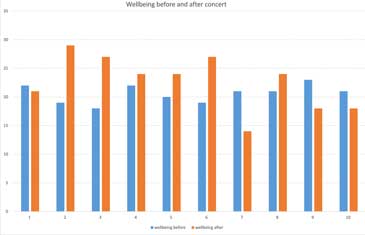 So what did the results show? Unfortunately we had some problems with the wellbeing umbrellas and although forty one were completed, we only have ten paired sets (where the audience member filled out an umbrella at the beginning and the end and handed them in together).

Of these ten pairs, seven showed an increase in wellbeing (calculated by adding up the total ratings before the concert, the total ratings afterwards, finding the difference between the two scores and dividing this by the score before the session and multiplying it by one hundred). For two participants, this was by as much as 50%. The pictured table shows these ten participants’ wellbeing before (in blue) and after the concert (in orange).

If we consider this data by state rather than by individual, we see that on average, participants reported feeling 34% more inspired, 26% more active, 5% more enthusiastic, 28% more excited and 5% happier after the concert than before. Only alertness showed a decrease – of 14%. This would seem to suggest that the concert did in general have a positive impact on wellbeing and this is reinforced by responses to the questionnaire, where ‘happy’, ‘relaxed’, ‘peaceful’, ‘uplifted’ uniformly top the graph (figure 2).

Knowing that the Ravi Shankar piece was themed on death meant that I thought about the specimens in the museum & imagined them interacting with the music.

I felt much more relaxed and able to engage emotionally with the music once I knew something about it cultural + historical context, in the second half.

That knowledge of the music had enriched the experience was a recurring theme:

Having an awareness of the music helped to appreciate the musical pieces as well the environment in which they were played.

‘the talk made me feel more aware + […] this resulted in feeling more alert and engaged. Felt that ‘knowing more’ resulted in subconscious labels and slightly lazier responses but this left me enjoying music more. Maybe.

This final comment raises an interesting question about the extent to which the audience had to ‘work’ in part one compared to part two and its impact on their enjoyment. While most of the quotations I’ve given suggest knowledge enhanced experience, this respondee suggests they may have been ‘lazier’ in the second half and are equivocal about whether information about the music improved the experience or not.

There is a big contrast between the surrounding exhibited paintings and sample[s] and the peaceful-sounding music.

I thought the venue would be more evocative and emotional that [sic] it actually ended up being – If anything it felt surprisingly mundane against the beauty and ethereality of the music. 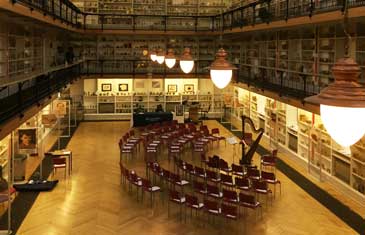 For many, the museum was a calm and relaxing space which helped them focus. Others were more unnerved though:

Some also responded to the cultural capital afforded by the venue, or had the museum's displays invoke an idea of these specimens as sentient participants, for example,

I also felt there was a second layer of audience, with the specimens participating and watching the event.

I’d like to end on one of the most poetic responses which encapsulates what the event was trying to achieve – which this person has articulated perfectly:

I am left with a profound sense of the history of human feeling. The specimens are caught in a moment of time, and so were our emotional responses to this evening’s music. A wonderful way to experience a beautiful performance.

This event was supported by QMUL’s Centre for Public Engagement. You can read two, slightly expanded, blog posts about the concert on the History of Emotions blog.

The Centre for the History of Emotions have several upcoming events, returning to Barts Pathology Museum for the pop-up 'Museum of the Normal' experience and holding an evening seminar on 'Emotions and Cancer: History and Patient Experience', both as part of Being Human Festival of the Humanities.

You can view these and other upcoming events on their website here.

(thanks go to Barts Pathology Museum for hosting the event)