ArtNeuro - Setting up a Collaborative Exhibition 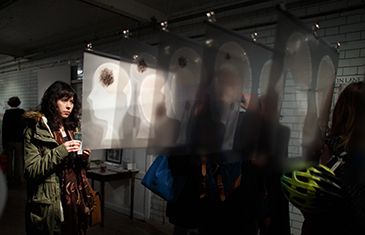 Art Neuro was a four day program of activities bringing together art and science. The central event was an exhibition of artwork created from by 17 pairings of artists and neuroscientists as well as 3 interactive visual illusion installations.

The main exhibition was entirely free, attracting over 1000 participants, and encouraged the public to directly engage with current neuroscience topics. The artists and scientists who had created the pieces were present to talk about their experiences of science and the artwork acted as the ideal starting point for debate and conversation.

We also hosted a series of workshops and talks. These included an interactive memory experiment, a number of screen printing workshops which were intercalated with a lesson on brain evolution, knit-a-neuron sessions, a mental health panel discussion, a brain-themed poetry evening, a “synaesthesia” cocktail night and numerous SciBar events – which featured talks by artists and scientists.

Setting up a large, multidisciplinary set of events presents all manner of unexpected challenges.

We also learned the importance of promoting events early and the critical role that effective PR can play in the success of your project. On this point, we’d definitely advise you start plugging media channels as early as possible. We only began properly around 2 months before and this didn’t feel enough. Plan this (along with everything else) from your deadline date backwards and make sure your deadline does not equal your exhibition/show date.

The advantage of using largely word of mouth in our advertising and PR was that we feel the events were a very effective method of science public engagement, as it attracted a more arts-based audience who would not normally engage with science.

During Art Neuro our visitors gave positive feedback on Twitter, in our physical guestbook and in person at events, enabling us to establish an overall positive response. However, having worked through the project from start to finish we now also realise the importance of more precise and targeted evaluation techniques. Especially with looking to put on a second exhibition, Art Necro, we realise that certain information from the first show (such as demography, accurate visitor numbers or a more structured feedback form) would have proven incredibly useful.

Because of this, evaluation methods are a top priority for our next project and we are already planning the key information to get from our visitors for future events. We are also working in conjunction with a web developer on a number of novel methods for profiling, counting and subsequently targeting our key audience.

Things we will be sure to include for the next project will include: a social media review system, visitor testimonials, “what I learnt” wall or postbox, information on scientific education level, age, postcode, gender, ask whether they came for the art or for the science.

A key impact area for the project was on the participants themselves. Almost all of the artists found the unique opportunity of working alongside a scientist to be a rewarding experience and it allowed the majority to develop new themes to their work as well as a chance to try out new methods. Many of the researchers were surprised at the value they got from their experience as well. Most had set out to collaborating with an artist as they thought it might be simply fun to do, but by the end the majority had developed new techniques, ideas, communication methods and friendships they had never expected. 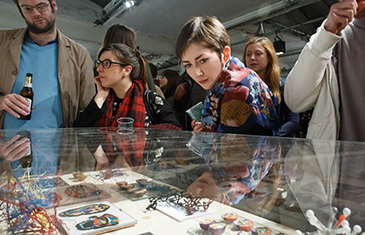 Artist Tamsin van Essen’s is now developing her work with her Art Neuro scientist partner Christian Matheou and plans to work in partnership with the charity Alzheimer’s UK to collaborate with patients with early-onset Alzheimer’s, conducting her own experiment looking at the loss of familiar object recognition over the disease’s progression. Fellow partners Duncan and Andrew Macaskill are in the process of working on a full exhibition centred around Andrew’s research theme of “form dictating function” in neurons.

With the researchers, again nearly all found the experience to be fun, but what was particularly interesting were the projects where the scientists were also able to yield results that fed back into their research. Dr Seb Crutch was able to develop new diagnostic methods using the deconstructed objects created by Charles Harrison. Filmmaker Georgina Cammalleri’s documentary has also since been re-edited and used to promote a crowdfunding campaign to further Dr Robin Carhart Harris’ research, with Cammalleri continuing to document Robin’s incredible ground-breaking work.

In future, it is precisely these kinds of projects we hope to curate and develop, rather than the scientist just acting as an advisor we would like to see them take on the role of full contributor.

The lasting legacy of the project has been the creation of this unique network of multidisciplinary artists and scientists and the continuation of relationships, yielding valuable work, methods and resources for both artists and scientists. This network has proven invaluable in beginning our sequel project Art Necro, which – along with the lessons learned from Art Neuro – has made the early stages of development much easier.

All information, artwork and contacts can be found on artneuro.co.uk. We also have a making-of documentary which gives an interesting and informative insight into the various projects and the thought process that went into them – this will also be made available via the website soon.

For more information on our next project, ArtNecro, exploring the science of death, visit our new website.

ArtNeuro was funded through a Centre for Public Engagement Large Award.