Preserving a generation of stories from home

Tower Hamlets is home to one of the largest Bangladeshi communities in the UK, with families speaking different languages between generations. Emily Burns, Director of Queen Mary’s Centre for Public Engagement, caught up with the team behind Stories from Home to find out how this unique project aimed at ensuring stories and heritage languages are passed on to the next generation – a key part of cultural history and identity – came to be. 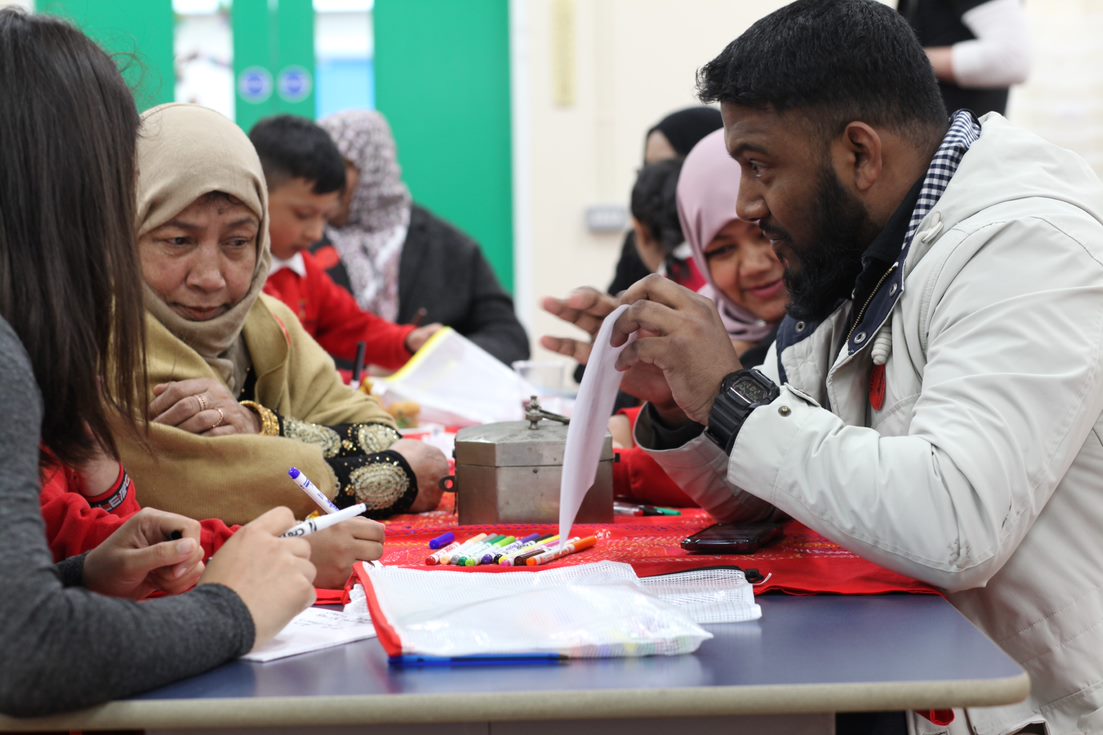 “You need to meet Nurull”

Kathleen McCarthy joined Queen Mary as a Lecturer in Linguistics, with a particular interest in how bilingual children learn language. “We do lots of work around multilingualism in the Linguistics department,” explains Kathleen, “I was interested in setting up an intergenerational project and straight away my Head of Department said ‘you need to meet Nurull from the MCP.’

Looking back, I just feel really lucky to have been introduced to Nurull and all of his collaborators. We get on really well, which is always important for the ongoing life of a project. One thing that’s really driving this project is both of our passions for the changes that we’re seeing in the Bangladesh community.”

Nurull Islam is one of the co-founders of the MCP, or Mile End Community Project: a youth and community organisation founded in 1995 to nurture the creativity and potential of the area’s young people. Nurull speaks passionately about the values he shared with Kathleen from the offset: “It became very apparent that we had similar interests, projects and experiences. From that introduction, we had a meeting at MCP and just thought you know what, something needs to come from this.”

“I realised this was happening in my generation”

At the time of meeting Nurull, Kathleen had been working with families and children of Bangladeshi heritage for eight years. She was researching Sylheti, a heritage language spoken by the Bangladeshi community in both Camden and Tower Hamlets, just round the corner from the MCP headquarters.

“I was spending lots of time with families, including children who lived with their grandparents,” explains Kathleen. “I noticed a clear decline in children’s use of their mother tongue, or heritage language, in families with second generation parents. Parents and grandparents were raising this concern with me, and noticing that there wasn’t enough support for mother tongue classes locally. With it being linked to my research and a concern raised by family members themselves, it felt like a natural fit for a public engagement project.”

Nurull shared the same ideas, but from a different angle: “I work in the local community and I was listening to the stories of the journeys first generation Muslim migrants made to this country. It became really apparent just how important it was to preserve these stories and make sure they were heard. The Bangladeshi people fought for their language – this year represents the 50th anniversary of their victory and independence. Yet the very language that was fought for was in decline, and I realised history would note that this happened in my generation.”

Nurull was similarly mindful of the relationship between his four children and their grandparents: “Yes there’s unconditional love, they do have conversation in their own way. But the way you and me are conversing now – that is non-existent. All of the things that get passed on from grandparents to grandkids, traditions and journeys, all of that was lost. We grew up listening to that, so the more I thought about it the more I realised the scale of the issue.”

“There are changes to the Sylheti language which happen naturally over time, but the loss of your mother tongue and everything that comes with it is another thing entirely,” adds Kathleen.

“These are priceless memories”

After their initial conversation, Kathleen came to the Centre for Public Engagement at Queen Mary for some advice. “The CPE team was really positive and supportive of the idea, so we applied straight away for a Large Grant.”

The team ran intergenerational storytelling workshops that enabled children to communicate with their grandparents in a barrier-free environment. Parents were part of this process, acting as interpreters if needed. Grandparents told their stories in Sylheti and the children would retell them in English and illustrations. The team captured the process on film, with beautiful short stories narrated in both Sylheti and English, accompanied by the children’s illustrations.

MCP have award-winning expertise in film-making, but Nurull’s reasons for using film in this instance were three-fold: representation, access and legacy. “We just weren’t seeing people from our community in films – the power of seeing someone like you on a big screen is huge. On top of this, the films would be accessible everywhere from London to the villages in Bangladesh. Finally, we wanted grandchildren to be able to watch the films with their grandparents, slowly picking up the words as those stories were retold.

That generation have never asked for it, but we wanted to give them a listening ear, honour and preserve their experiences and stories. These are priceless memories, and sadly we know how fragile life is, even more so with Covid, and especially for this part of our community.”

Kathleen explained that there was another practical reason for choosing film over any written medium: the written form of Sylheti (Sylheti Nagri) fell out of use in the mid to late 20th century, and although it’s now being revived for academic purposes, it isn’t currently used by Sylheti speakers in London. “No one is reading or writing in Sylheti, so books wouldn’t work. Film had never been something I’d used for public engagement. But we realised that if we wanted to properly access the community across three generations, we needed the right medium.”

They also wanted to ensure that the process would help raise awareness of language and its role in identity. Nurull explains: “The films allow people to ask questions for themselves – we’re not saying you should be speaking a particular language. But we want to take people back in time, and help them view language as a potential element of their identity, alongside the changes happening around us, the clothes we wear, the food we’re eating.”

As the audience of the films grew, more families stepped forward to get involved. “We were going into local schools where the only language you really learn about is English. Children were able to see their own mother tongue being spoken in front of assembly – that’s huge when you’re five. Having conversations with those children about why it’s important to speak the same language as your Gran is really quite moving!” adds Kathleen.

The extent of engagement within the local community caught them by surprise. “I knew there was a need for it,” says Nurull. “But every time I started to speak to people, a five-minute chat turned into half an hour. Especially from our elders.”

“It was like a scene out of The Apprentice”

The team launched their films in Queen Mary’s Octagon, and even the event itself was an opportunity to bridge gaps. “Some of the families involved had lived in the area for 30, 40 years and never set foot on campus. We had to order a load of cabs to get everyone here!” explains Kathleen.

“It was like a scene out of The Apprentice outside the Queens’ Building!” laughs Nurull. “But accessibility was really important to us, and we were conscious that people often perceive an invisible wall around universities. It needed to be as easy and welcoming as possible – the transport, the food, the right entertainment.”

They quickly discovered the ‘many hats’ nature of public engagement; from ushering grandparents and handing out trays of samosas, to welcoming guests and opening the show. On top of this, the commitment to making an event as special as possible takes significant time. “We were not event managers; we didn’t have those skills. It felt natural to host a big event after a public engagement initiative, but it was a huge learning curve.”

Stories from Home went on to win awards and they’ve expanded beyond the Bangladeshi community, involving libraries and museums, speaking at festivals and to politicians, and providing learning opportunities for the Stories from Home team.

“I was surprised by the skills I could acquire in a totally different context,” reflects Kathleen. “I work with children through my research and I’d done some voice directing as a linguistic consultant, but never in a film setting. I found myself directing, where I thought I’d be taking a step back.”

“I think differently now about how I approach projects since working with a university, looking at how it could feed into research,” adds Nurull. “In the long run it then has greater impact, both to the relevant community and those working in the area.”

The whole Stories from Home team, including Lindsay Kight (Human Stories Films), Mahera Ruby (Blooming Parenting), the Mile End Community Project, and the families and schools who have taken part.

Stories from Home was originally funded by the Centre for Public Engagement, and has gone on to secure funding from Barking Library and Arts Council England (Pen to Print). The project has continued to work online throughout Covid-19 and is expanding to other communities and London Boroughs.

Kathleen McCarthy is the Director of the Queen Mary Language Acquisition Lab. Nurull Islam is an Honorary Fellow in Film and Linguistics at Queen Mary.