In Review: Engagement and Impact Awards 2021

“After such a challenging 18 months, it is heartening to see that engaging with the outside world and making contributions to society continues to be a priority for staff and students”—Professor Colin Bailey, President and Principal 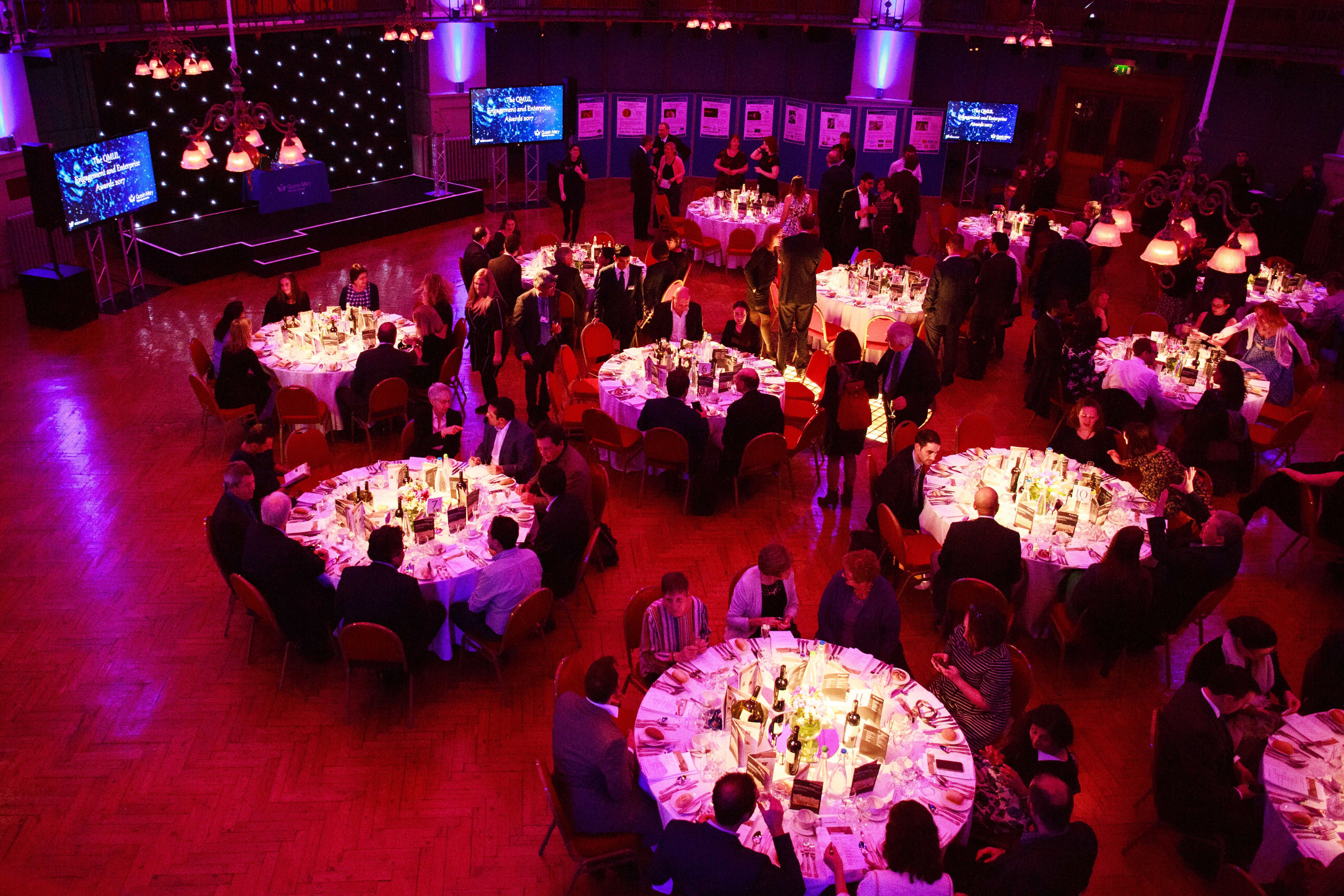 Last week we had the honour of hosting the Engagement and Impact Awards: Queen Mary’s annual celebration of the excellent public engagement and impact work happening at the university. Organised as a collaboration between the Centre for Public Engagement and the Impact Team, the E&I Awards are an opportunity to recognise the successes of Queen Mary students, staff, and their external partners, in ensuring their work contributes to, and has an impact on, wider society.

This year we received almost 80 nominations from right across the University: showcasing the diverse ways those within the Queen Mary community have been working locally, nationally, and internationally to create a better world. It was a delight to also see collaboration at the heart of many of these projects, showing the power of partnerships for mutual benefit: shaping the work of Queen Mary and positively impacting the communities involved.

Through tough deliberations of the public engagement and impact panels, 31 projects were shortlisted across the twelve award categories (six for impact; six for engagement). In the weeks leading up to the event, all the shortlisted projects were invited along to a filming session to tell the story of their work, and reflect on the outcomes and learnings of the process. You can read about all the shortlisted projects and watch the award showreels on our Engagement Shortlist and Impact Shortlist pages on the website.

Unfortunately due to the ongoing circumstances, we were unable to do our usual in-person ceremony, and so like many others had to take to the online sphere. However, we didn’t let that stop us from celebrating in true Queen Mary style with staff, students, collaborators, and friends and family joining us to recognise the excellent work that all our nominees and shortlisted projects have been involved in!

“From the intricate pathways with which we generate impact to the promising seeds of impact found in the work of our ECRs and PhD students, there is a whole host of impact at Queen Mary worth celebrating”—Professor Kavita Datta, Deputy Vice Principal for Research Impact

The evening kicked off with the Impact half of the awards which were presented by Professor Kavita Datta, Deputy Vice Principal for Research Impact. Though ‘REF’ has been a word on everyone’s lips this year, the Impact Awards sought to go beyond the outstanding impact case studies submitted in March and look towards celebrating the wider picture.

Celebrating the best co-production of impact with stakeholders outside of academia, the ‘Alliance Award’ was awarded to People’s Palace Projects for their work with the Kuikuro Indigenous Association of the Upper Xingu—an established partnership that has been wholly focussed around co-production and support, even throughout COVID-19.

Looking closer to home, the ‘Local Champion Award’ was won by the Barts & QMUL COVID-19 Visor Response Group who provided outstanding local support throughout the pandemic, highlighting an impressive collaborative team drawn from right across the university and beyond. On the other end of the spectrum, Jack Cuzick and the HPV Screening Project, were awarded the ‘Voyager Award’ for their tremendous international impact both in terms of numbers of people reached, but the significant health improvements made as a result.

The ‘Pathfinder Award’ was won by Andy Prendergast’s team with the SHINE Trial: which brought together cross-disciplinary experts to engage with policymakers and communities and, as a result, had impacts across a diverse range of fields: from social science to geography to paediatrics. We also had the opportunity to celebrate the impact work of ECRs and PhD students through the ‘Trailblazer Award’: which was awarded to Mary Venn for her work on CovidSurg, to support patients in accessing evidence about the impact of COVID-19 infection on surgical outcomes.

The final award of the Impact category was the ‘Dickinson Award’, named after Queen Mary alumnus and musician Bruce Dickinson. This award represents the entrepreneurial spirit within academia and was awarded to Andy McPherson with Bela: an open-source hardware platform for creating sound and music, credited for its’ learnability.

“Since arriving at Queen Mary, I have been struck by the commitment of my colleagues to engage and involve public audiences in their work” – Dr Philippa Lloyd, Vice Principal for Policy and Strategic Partnerships

The second half of the event shone a light on the fantastic public and community engagement activities happening at Queen Mary and were presented by Dr Philippa Lloyd, Vice Principal for Policy and Strategic Partnerships. Despite the challenges presented over the pandemic around engagement—we saw projects that not only sustained their engagement, but also adapted to support their partners in the new circumstances: a testament to how much engagement means to those at Queen Mary.

Richard Garriott, Queen Mary honorary graduate, game designer and astronaut presented ‘Inspire: The Garriott Award’ to The CHILL Study: an outstanding example of a project that found innovative ways to adapt their engagement approach during the pandemic. Another project that successfully adapted to continue during COVID-19 was ChessWatch: who received the ‘Involve Award’. This award recognised the exemplary approach to citizen science that underpinned the programme: offer ample opportunities to work with different stakeholder groups throughout.

Celebrating the partnerships and collaborations are essential to high-quality public engagement the ‘Interact Award’ was won by Stories from Home—a collaborative project by Kathleen McCarthy in SLLF, Nurull Islam from Mile End Community Project, Mahera Ruby from Blooming Parenting and Lindsay Knight from Human Stories Film. We very luckily caught up with this project a few months ago, so you can read a blog on their work here!

Michèle Barrett’s work to reveal the historic non-commemoration of Indian and African people by the Commonwealth War Graves Commission was awarded the ‘Influence Award’ due to how enormously influential the work has been in producing clearly defined differences to policy and practice.

We were lucky enough to be joined by Lucy Hawking to award the ‘Hawking Award for Developed Understanding of Public Engagement’ (named after herself). This year, we were thrilled to be able to award it to the Unit for Social and Community Psychiatry for their outstanding commitment to co-production: doing research with people, rather than about them, ensuring that the patient voice is embedded in all that they do.

This year also saw the inaugural awarding of the ‘McOwan Award for Leadership in Public Engagement’, named after Professor Peter McOwan who was core in driving and developing public engagement at Queen Mary until his passing in 2019. In true Peter style, there were two award winners for the evening. David Collier and Patient and Public Involvement at the William Harvey Research Institute were presented this award for their work in creating an environment where PPI activities not only thrive, but patients feel comfortable and empowered within the University environment. The second recipient was Aoife Monks, for her tireless work to support public engagement at Queen Mary through her own work, and her work on the Arts and Culture Strategy.

“These awards are a real testament to Queen Mary’s commitment to ensuring our work involves and benefits people across the world”—Dr Emily Burns, Director of the Centre for Public Engagement

So, as we get ready to wrap-up trophies and send them in the post to our shortlisted projects and winners, all that remains is to send our heartfelt thank you to heartfelt thank you to everyone who took time to apply or nominate someone, to all those who were shortlisted, and all the winners. We also want to thank those at Queen Mary who may not have submitted themselves in the awards this year but are still involved in engagement and impact activities: as we know that there are many more out there than what the Engagement and Impact Awards 2021 captured…

We look forward to seeing you all at the next one!