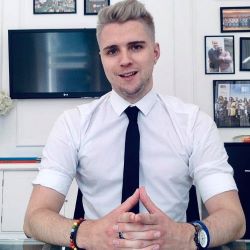 Matthew completed his undergraduate degree in Political Science at the University of Birmingham completing his dissertation focusing on the UK Labour Party’s 2015 electoral defeat, supervised by Professor Colin Thain. He then went on to study a Masters at King’s College London in International Political Economy completing his dissertation on the UK Labour Party’s economic policy 2007-2017, supervised by Dr Isabelle Hertner.

Formerly, Matthew was a political strategist and campaign manager consultant. He worked for a number of Labour Party Parliamentarians including Jess Phillips MP, Baroness Gisela Stuart MP, Jack Dromey MP and Lord Rodger Liddle as well as the UK Labour Party. He has managed countless elections for the Labour Party and other campaign organisations across the UK in Lambeth, Midlands and Wales. Matthew was also a research associate for ‘Policy Network’ and ‘Progress’ thinktanks. Matthew was mentored and worked with a number of the top UK political strategists such as Matthew Doyle, Morgan McSweeney, Richard Angell and Caroline Badley.

Past areas of research: Brexit, the UK and the European Union relationship, post-war Britain, 2008 Financial Crisis, Austerity under the UK Coalition Government, Theories of Power and Discourse Analysis.

A review of Crines, A. (2021) ‘Corbynism in Perspective: The Labour Party under Jeremy Corbyn - Building Progressive Alternatives’, London, Agenda Publishing.

Collaboration with Dr Isabelle Hertner (KCL) on a journal article examining the influence of women and queer pressure groups in the UK Labour Party and the German Social Democratic Patry.

Conducting research on the Labour Party’s political economy and if it is possible for a Labour government to implement a leftwing economic policy in the UK, which he hopes to publish as a set of journal articles.

Crines, A. & Lloyd, M. (2021) ‘Theresa May and the Rhetoric of Global Britain: A Paper Commemorating Dr Judi Atkins’ ‘The UK and the World’ conference at Anglo American University.

Lloyd, M. (2018) ‘Why has there been a shift n the UK Labour Party’s economic policy since 2007?’ at ‘Future of the Left’ conference, University of Birmingham.

Matthew has previously been a Guest Writer for The Mile End Institute.

Discussant at the ‘Wilton Park Dialogue Roundtable: Germany and the UK - Facing The Future’ roundtable. I was one of two doctorate research students invited alongside 33 other senior academics, politicians and business leaders from both the UK and Germany.

Discussant at the book launch of Crines, A. (2021) ‘Corbynism in Perspective: The Labour Party under Jeremy Corbyn - Building Progressive Alternatives’, London, Agenda Publishing.

Chair of ‘Approaches to Power and Leadership’ panel at 2021 The Thatcher Network Annual Conference, Newcastle University.

Panel member on 2020 ‘Bringing About Political Change’ panel at University of Birmingham.

Matthew is the editor of ‘The Political Science Thought Bubble’ blog https://thepoliticalsciencethoughtbubble.wordpress.com/