Professor Ginestra Bianconi, Professor of Applied Mathematics at Queen Mary’s School of Mathematical Sciences, has been elected a Fellow of the Network Science Society. 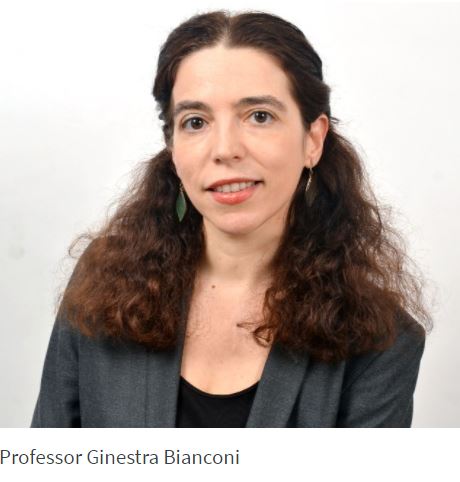 The Fellowship Program of the Network Science Society recognises researchers who have made outstanding contributions to network science research and the worldwide community of network scientists.

Professor Bianconi was recognised by the society for her foundational contributions to network science and in particular her work on the formulation of the Bose-Einstein condensation in complex networks and advances on the structure and dynamics of multilayer networks.

Commenting on her award, Professor Bianconi, said: “I am honoured to receive this award in recognition of my work on the mathematics of networks. I would like to acknowledge all my collaborators and the institutions that hosted and supported my research, especially Queen Mary.”

Understanding the foundations of network science

Professor Bianconi’s research covers several aspects of network science including the statistical modelling of networks and the formulation of advanced information theory methods to extract relevant information from network data. Her work has an impact on a broad range of disciplines from communication and financial networks, to neuroscience.

More recently her research has focused on generalised network structures including multilayer networks and simplicial complexes. Professor Bianconi said: “In my research, I investigate the foundations of network science using statistical mechanics, topology and dynamical systems. I develop theories that relate networks and complex systems to other fields in mathematics and physics while proving themselves useful to help interpret and understand the world around us.”

“I am glad that this award recognises my results on the Bose-Einstein condensation in complex networks and on information theory, structure and dynamics of multilayer networks, which are key areas that drive my research.”

Alongside her role within the School of Mathematical Sciences, Professor Bianconi is an Alan Turing Fellow at the Alan Turing Institute, the national institute for data science and artificial intelligence. She is also Chief Editor of JPhys Complexity and Editor of several journals including Scientific Reports, Entropy and PloSOne.