Read 1979-1989: Scottish Nationalism in the Thatcher Years or return to timeline 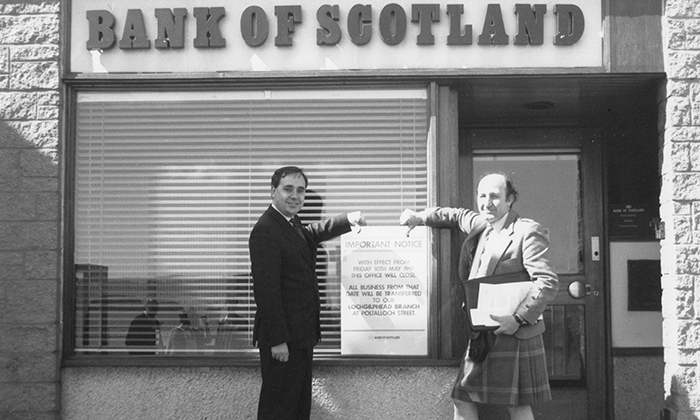 MacCormick campaigning with Alex Salmond in 1991

1989 was the year that the Thatcher government levied a new Community Charge, popularly known as the Poll Tax, on Scotland, one year ahead of England and Wales. This helped fuel Scottish nationalism for years to come, and is still remembered today. The Scottish Constitutional Convention – which, to repeat, the SNP did not participate in – continued to gain momentum with a series of important publications (eg Towards Scotland’s Parliament in 1990, and Scotland’s Parliament, Scotland’s Right in 1995), culminating, finally, once the Tony Blair Labour Government came to power (in May 1997), in a successful referendum in September 1997 on the establishment of a Scottish Parliament (the Scotland Act 1998 passing on 17 November 1998).

Although the SNP did not participate in the Convention, it was by no means idle. The policy of ‘Independence in Europe’ was being further and further elaborated upon, and the flurry of policy activity in the early 1990s (including another re-drafting by MacCormick of a ‘Constitution for a Future Independent Scotland’) was in many ways prompted by the need to reorient policy, including constitutional policy, in an explicitly European-friendly way. The SNP became increasingly clear that Europe was where the future for Scottish nationalism lay. The Maastricht Treaty, which came into effect in 1993, introduced various changes (including the emergence of subsidiarity) that could be seen to favour regions and smaller nations.

MacCormick was, once again, a leading player in the advocacy for, and the articulation of, this European vision. Apart from the drafting of SNP policy (as noted above), and participating as a leading member of Allan Macartney’s important Working Group Report on the Transition to Independence (in 1995-6), MacCormick intervened on the academic stage, creating a stir with his charming argument (delivered in 1992 at the London School of Economics as the Chorley Lecture) that we were living in a post-sovereign age in Europe. MacCormick’s stance on sovereignty was vital: if one held sovereignty too dear, Europe could be seen as much a threat as the UK for Scotland – either way, Scotland would not ‘get back’ all that it once had, falling prey to just another form of centralised power; but if one saw sovereignty not like property which one lost as another acquired it, but as virginity, which one could lose (happily, in the right circumstances) without anyone else gaining it, then Europe could be seen as an opportunity for a new kind of political and legal commonwealth (where power was profoundly diffused). MacCormick, then, articulated both the constitutional values and constitutional mechanics behind the SNP’s catchy ‘Independence in Europe’ stance.

Scottish International Program, hosted by Margo MacDonald, ‘Europe in the Melting Pot’, with Neil MacCormick and David Martin in the studio, broadcast on 20 November 1991

Delivers Keynote Lecture of International Conference on Law and Society, University of Strathclyde, Glasgow, 1996, under the title ‘Law, Politics, State and Nation: Deconstructing the Sovereign State’

Continue to 1999-2004: An Advocate for Stateless Nations in Europe or return to timeline.