Read 1965-1972: Scholarly Beginnings - Dundee and Oxford or return to timeline 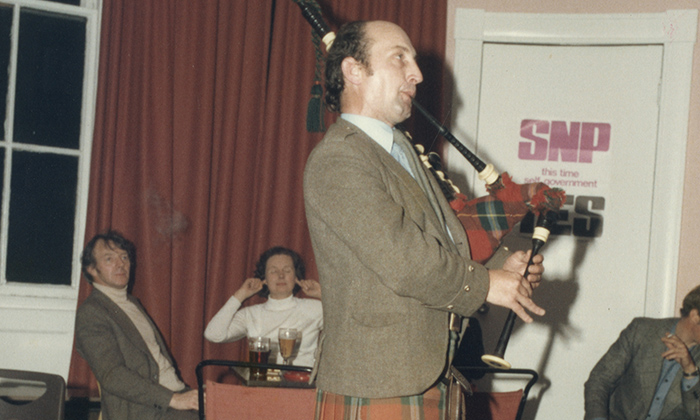 MacCormick campaigning for 'Yes' in the 1979 referendum

The 1970s were a period of incredible importance for politics in Scotland. The 1970s saw intense debates on the meaning of nationalism in Scotland, particularly within the SNP – debates in which MacCormick was a leading, and greatly respected, participant. Part of the respect accorded to MacCormick was simply due to the quality of his intellect and the standards of his interventions, including his generous and inclusive way of listening to the views of those he disagreed with. But part of it, undoubtedly, was his position in academia. In 1972, and at the age of 31, he was appointed as Regius Chair of Public Law, and the Law of Nature and Nations at the University of Edinburgh – a position he was to hold for 36 years when he retired in 2008. It is telling that he was almost always referred to in SNP documents, minutes and also the media, as ‘Professor MacCormick’. As one SNP member put it, ‘MacCormick was the SNP’s credibility.’

MacCormick could not have arrived in Scotland at a better time. The Royal Commission on the Constitution had begun its deliberations in 1969 (under Lord Crowther initially, and then the devolution-sympathetic Lord Kilbrandon from 1972), and reported on 31 October 1973. MacCormick’s older brother, Iain, had been nominated to stand in the 1974 Westminster elections, and MacCormick assisted him in his campaign – successfully so, with the SNP winning 11 seats overall in the two elections held that year (February and October). This was a time of incredible optimism within the SNP. MacCormick himself celebrated by writing a tribute to his father in an article in the Scotsman (‘A Filial Look at the Home Rule Movement’, November 1974), in which he confidently asserted that ‘Today, the question is not whether a Scottish Parliament will meet again, but where and how’.

MacCormick himself became a prospective parliamentary candidate for Edinburgh North in 1975. He was incredibly busy, combining – as he was to go on to do for the remainder of his life – academic work and political involvement. Amongst his political interventions in this period were:

All throughout this time, as noted above, MacCormick was busy producing important contributions to academic jurisprudence. Undoubtedly the most important of these was his first book, Legal Reasoning and Legal Theory, published in 1978, and the culmination of many years work that had begun in Oxford (as lectures on ‘Law and Logic’). For some, this was to remain MacCormick’s best work – it was certainly the first (and still today rare) detailed treatment of modes of argumentation in legal reasoning in England and Scotland.

Continue to 1979-1989: Scottish Nationalism in the Thatcher Years or return to timeline