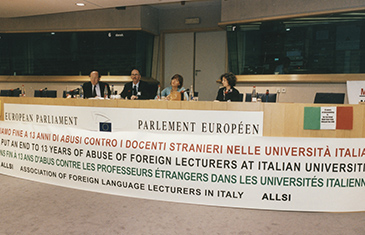 MacCormick at work in the European Parliament

After having unsuccessfully contested no less than five Westminster elections, MacCormick finally tasted electoral success: he was elected as the second of two SNP Members of the European Parliament in 1999. Again, MacCormick’s timing was perfect: 1999 saw the establishment of the Scottish Parliament, and though some would have liked to have seen MacCormick as a MSP, there is no doubt that his temperament was much more at home in the European rather than the Scottish Parliament. MacCormick was European through and through: he spoke a number of European languages, and one of his hallmarks as an academic (especially as a legal philosopher) were the links he established and developed with Continental thinkers. He was also, as of 1999, the author of a highly influential book on Europe, and its legal and political status (entitled Questioning Sovereignty: Law, State and Nation in the European Commonwealth). He was, as quickly became apparent to all in the European Parliament, an authoritative voice on the sui generic character of European law and of the constitutional possibilities within Europe for stateless nations. 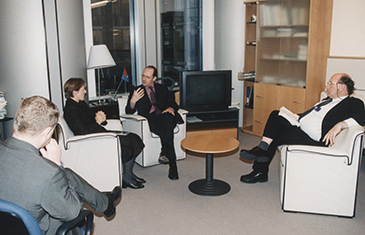 MacCormick with John Swinney delegation at the European Parliament

By all accounts, MacCormick was an incredibly hard-working MEP (this was an acknowledged in more ways than one, eg his winning the Euro Politician of the Year Awards three times). His judiciousness, and general likeability (many in fact say ‘lovability’), led to him being chosen as the Ombudsman for the Greens-European Free Alliance European Parliamentary Group, dealing with (sometimes delicate, often emotional) internal issues of the Party. He made important contributions as a Member of the Legal Affairs and Internal Market Committee, serving for instance as the Standing Rapporteur for Parliamentary Immunity (which, again, required the exercise of judgement that rose above political squabbling, not to mention dealing with the various related legal complexities). However, the most conspicuous of his contributions was as an Alternate Member of the Convention on the Future of Europe, where MacCormick threw himself head-long into the task of drafting a European Constitution (famously wearing a kilt to the opening of the Convention). He proposed over 80 amendments, some of which have made their way into what is now the Lisbon Treaty, including the safeguarding of linguistic diversity and a strengthened definition of subsidiarity (particularly in terms of the participation, up-stream and down-stream, of sub-state parliaments). Apart from these achievements on a grand scale, MacCormick also scored victories for his constituents, including fighting fearlessly and with considerable success for Ferries in Scotland.

Unsurprisingly, during this period, MacCormick’s academic publications were put on hold, though he delivered many important (and many still unpublished) speeches, influencing and enriching our understanding of Europe – eg in his advocacy of ‘internal enlargement’, and in general in terms of his ‘confederal’ (rather than federal) vision of Europe (as articulated, for instance, in his Who’s Afraid of a European Constitution?, published in 2005). Few would disagree that he was more than a deserved recipient of a Knighthood for services to scholarship in law in 2001.

Continue to 2005-2009: Elder Statesman, Death and Legacy or return to timeline