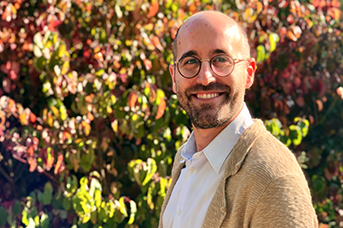 I am a historian of the Second World War and a specialist in the history of Jews in France and North Africa during the Holocaust. My first book, Pétain’s Jewish Children: French Jewish Youth and the Vichy Regime, 1940–42 (OUP, 2014) explored the coexistence between young French Jews and the Vichy regime. My second book, The SS Officer's Armchair (Jonathan Cape, 2020), examines the life of a low-ranking SS officer from Stuttgart whose personal documents were recently discovered sewn into the cushion of an armchair. I am concurrently working on a history of the Jews of Tunisia during the Second World War, and am also the Principal Investigator on a British Academy GCRF Sustainable Development Programme project entitled, “Traces of Jewish Memory in Contemporary Tunisia”.

I was an undergraduate at Sussex in History and French and completed an M.St and a DPhil in History at St Hugh’s College, Oxford. After completing my doctorate, I held a British Academy Postdoctoral Fellowship at Brasenose College, Oxford. I have held fellowships at the European University Institute (Max Weber Fellow), Yad Vashem and the United States Holocaust Memorial Museum. Before moving to Queen Mary in September 2019 I was a Vice Chancellor's Fellow in History at the University of Sheffield.

As a 2015 BBC Radio 3 New Generation Thinker, I contribute often to radio.

The history of Jews in France and the French Empire, Nazi Germany and the Holocaust, the history of Jewish prostitution and sex work, 1880–1940. I am currently working on the diary of a North African Jew who spent part of WW2 in Yorkshire as an RAF aviator.

February 2020 – January 2023: AHRC-DfG UK-German Call for Proposals in the Humanities Principal Investigator on the “Illicit Jewish Exchange: Jewish Pimps, Prostitutes and Campaigners in a Transnational German and British Context, 1875–1940” (link is external) (£349,307.00 from the AHRC and €377,437.00 from the DfG). The two postdocs on this project are Dr Paola Zichi (QMUL) and Dr Tova Markenson (TU, Berlin)

‘Tunis’ in J–M. Chaumont, P. Servais and M. Rodriguez Garcia, Reports on Prostitution and Trafficking Produced by the League of Nations (Geneva, 2016)

I welcome enquiries from prospective students who are interested in topics related to my research and beyond, in particular the history of Jews in France and the French Empire, the Holocaust, immigrants and ethnic minorities in France.

Time Magazine: After World War II, Most ‘Ordinary Nazis’ Returned to Lives of Obscurity. The World Must Recover Their Stories Before It’s Too Late (link is external) (June 16, 2020)

'The SS Officer's Armchair', The World Wars (link is external)

'In Conversation with Leïla Slimani’ (link is external), University of Sheffield, December 2018