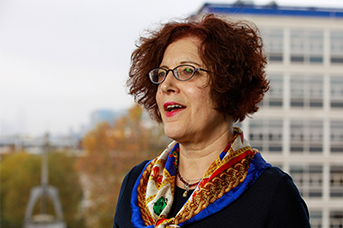 I am a historian of Europe of wide interests. My research has ranged across the period 1100-1600, through the exploration of themes in the religious culture of Europe. I am interested in inter-disciplinary encounters, and these have animated my work.  I also enjoy disseminating history to diverse audiences all over the world.

My research has introduced new approaches to the study of social relations in the predominantly religious cultures of medieval Europe. I have sought to understand the message of Christian charity as practised in medieval communities; to explore the meanings of the arch-sacrament, the Eucharist; to explore new narratives about Jews, which turned into public social dramas. In all my work I seek to understand issues of identity, community, and gender, the boundaries of cooperation and the threat of violence. Delivering the Wiles Lectures in 2017 led me to develop research on attitudes to strangers in medieval cities.

I am keen to support collaborations and interaction between scholars. During the Covid Year I founded with colleagues from the University of Ghent an international network and seminar, the Belgian-British Medieval Urban History Network, and created the Medievalists in Lockdown! group of QM medievalists and their Colleagues.

I enjoy supervising PhDs and aim to encourage emergent historians to acquire skills, find their voice through engagement with a wide range of sources - material, textual, visual, and develop concepts through engagement with other disciplines. I have been delighted to see most of those I have supervised go on to postdoctoral positions and then academic careers, or choose interesting work in the heritage and cultural sectors.

Appearances in the media:

I promote the public understanding of History by serving as President of the Jewish Historical Society since January 2020.