‘Change, grow and give, so go live your moments’ Queen Mary Alumna Jaspreet Kaur performs her poem ‘The Moment’ at Festival of Remembrance at Albert Hall

Accompanied by the String Ensemble of the Royal Marines Band Service, Queen Mary University of London Alumna Jaspreet Kaur (History BA, 2013) performed her poem ‘The Moment’ at the Festival of Remembrance at the Royal Albert Hall (November 12). 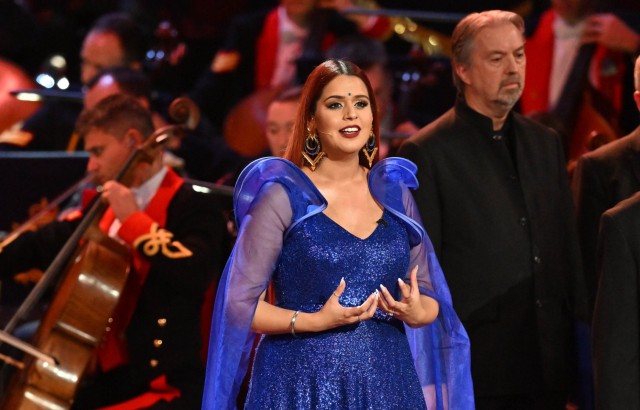 Jaspreet, who is pregnant, said: “This poem has been one of the most important pieces I’ve written, and to share it on one of the most treasured stages in the world – the Albert Hall – is beyond words. I truly hope its message on the oneness of humanity and serving others has inspired everyone that it has reached.”

She added: “My dad sat in the audience in tears – who would have thought that his little girl from East London, from an immigrant working class family, would be sharing her words in front of thousands of people?”

Wearing a special poppy pin representing women at war, Jaspreet mesmerized the audience for three minutes reading her poem.  Presented by the BBC’s Huw Edwards, her performance was shown live on BBC One and on BBC Radio 2.

Organised by the Royal British Legion and the BBC Events team, the Festival of Remembrance is a celebration of service, unity and camaraderie, reflecting the nation’s admiration for our Armed Forces. This year, it celebrated the RAF Regiment’s 80th anniversary, as well as the efforts of the NHS, which was recently presented with the George Cross and whose staff exemplify the core qualities of service by placing others before themselves. It also honoured those who fought to liberate the Falkland Islands 40 years ago, recognising their bravery, skill and sacrifice, said the Legion’s National President Lieutenant General James Bashall CBE.

Jaspreet's former Queen Mary Lecturer Professor of Global and Imperial History Kim Wagner said: “To watch your students go out into the world and thrive and succeed is one of the great joys of being a teacher. It was incredibly moving to see Jaspreet perform her poem at the Royal Albert Hall, and I am very proud of her and everything she has achieved. She is an amazing poet and performer.”

He compared her performance to that of spoken word poet Amanda Gorman’s delivery of ‘The Hill We Climb,’ which she famously recited at President Biden’s inauguration.

Queen Mary’s Head of Alumni Engagement Gemma Marenghi said: “She is very inspirational and embodies the values and ethos of Queen Mary. She even kicked off her recent university book tour by returning to our campus in October. Using her history background, she delivered a lecture and workshops aimed at students, like her, from a South Asian background and those with an interest in postcolonial studies. She is a role model and a trailblazer for our students. We are very proud of her.”

Jaspreet said: “While I was a student at Queen Mary, I met so many inspirational women, including my lecturers. I feel I am a product of Queen Mary’s ethos of social mobility in action and want to give back to the university and inspire the next generation, especially students from immigrant families who are the first person in their family to go to university. I want to tell them: you can do this and you can be successful like me and go from Queen Mary to performing at the Royal Albert Hall.”

Since 2015 Jaspreet, also known as Behind the Netra, has been performing spoken word on stages across the UK, aiming to tackle issues related to gender discrimination, mental health stigma, the postcolonial immigrant experience, and taboo issues within the South Asian community.

After graduating from Queen Mary, Jaspreet completed a master's at UCL and trained to become a history teacher. She has taught at two London secondary schools and in January 2020 took a break from teaching to focus on writing her first book, ‘Brown Girl Like Me.’

Fluttering her nimble hands with bird-like movements and raising her palms upwards, Jaspreet concluded her poem saying: “And the moment that we all believe that we can change this world for the better, we will do it. Where we learn, change, grow and give, so go live your moments.”

Jaspreet Kaur is an award-winning spoken-word artist and writer from East London. Her work focuses on gender issues, historical topics and positive social change in the Asian community and wider society. She has taken a break from teaching to focus on her journey as a writer, poet and performer. Jaspreet has performed all around the UK, including at Westminster Abbey, Theatre Royal London and the House of Lords. Her debut book, Brown Girl Like Me, was published in February, and she regularly appears on the BBC’s Sunday Morning Live. For more information about Jaspreet, please visit: www.behindthenetra.com