Dr Glenn Hurst from the University of York delivered a hugely interesting talk on 4th Feb as part of the TIGER seminar series titled Engage, Contextualise, Share: Innovative Use of Social Media in Higher Education. 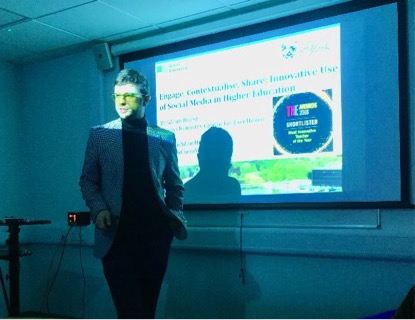 Glenn began by explaining that there is a pool of teaching excellence within the Department of Chemistry at York and many academics already use social media to complement their teaching; he said that this was a source of inspiration and provided a great platform for him to start developing his own pedagogical interests.

Glenn shared results from a recent survey completed by the Educause Center of Applied Research that demonstrated 67% of students believe mobile devices are important to their academic success. Glenn has a strong interest in green chemistry education and was keen to explore how game-based learning could be integrated with social media. He has utilized a variety of social media platforms within this context including Twitter, Instagram, YouTube and Snapchat.

His main goals in using these platforms is to achieve the following:

(4) Humanize academics by sharing some insight into his own professional life.

His experiences have shown him that using social media in this way can enhance the learning experience for UGs in the University of York but also those further afield, such as students and educators in Brazil where he was involved in the ACS Innovation Imperative trying to implement green chemistry in remote locations. Preliminary data support these findings; 4.32/5 students agreed that Snapchat is a useful tool in allowing them to contextualize chemistry in the real world and 4.32/5 students stated that they were more engaged with chemistry because of Snapchat.

Glenn has also been involved in creating a children’s book in the style of ‘The Diary of a Wimpy Kid.’ He worked with a team of undergraduate students from multiple departments (Chemistry and Education) to complete the book titled ‘The Green Formula,’ aligning the content with the school curriculum. He has also produced a number of apps such as the Chemistry@York app originally intended to support admissions and Organic Fanatic, which integrates gamification and social media to improve learning.

Glenn fully appreciates the limitations and challenges faced by using social media in higher education. He acknowledges that future work in this area needs to address inclusivity issues and is planning to create an Instagram account so that Snaps are accessible to all students in the future. We also discussed the limitations in terms of the complexity of material that can be covered by use of these social media platforms.

Glenn’s final message was to advocate co-creation and student partnership in all areas of teaching innovation; he feels that the success of all his pedagogical projects could not have been achieved without their efforts. The input from students is invaluable!