Radar tracking uncovers mystery of where honeybee drones have sex

Scientists from Queen Mary University of London and Rothamsted Research have used radar technology to track male honeybees, called drones, and reveal the secrets of their mating behaviours. 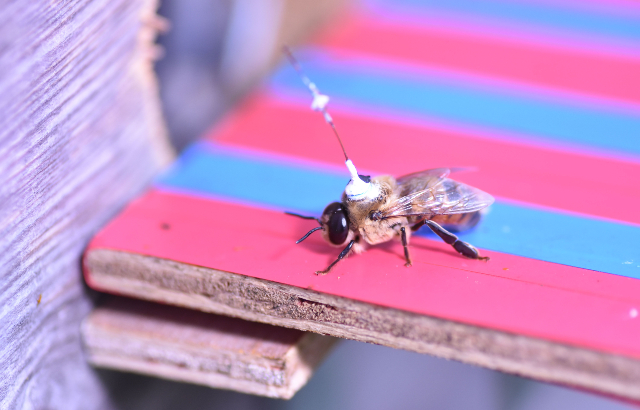 The study suggests that male bees swarm together in specific aerial locations to find and attempt to mate with queens. The researchers found that drones also move between different congregation areas during a single flight.

Drones have one main purpose in life, to mate with queens in mid-air. Beekeepers and some scientists have long believed that drones gather in huge numbers of up to 10,000 in locations known as ‘drone congregation areas’. Previous research has used pheromone lures to attract drones, raising concerns that these lures could have inadvertently caused these congregations. This new study is the first ever attempt to track the flight paths of individual drones and observe them in the absence of lures.

Similar mating sites, in which large numbers of males gather, have been observed in other animals but this is the first time males have been observed to move between multiple locations, hinting at the discovery of a new type of animal mating system.

The research is published today in the journal iScience and coincides with the UN designated World Bee Day (20 May), which aims to raise awareness of the importance of pollinators, the threats they face and their contribution to sustainable development.

How to track a bee

To track the flight paths of drones, researchers attached a small antenna-like electronic device, known as a transponder, to the back of individual honeybees. When the transponder receives a radar signal from the transmitter, it absorbs its energy and converts it into a higher frequency signal, which is then detected by the radar antenna. As the transponders signal is twice the frequency of the initial signal, it is easily identifiable and cannot be confused with reflections of the original signal from objects in the surrounding environment, such as trees of buildings.

Using this system the researchers are able to track the bee’s position relative to the radar every 3 seconds with an accuracy of around 2m. The team then used the positions of known landmarks within the outdoor experimental field site to determine the true GPS position of each bee.

The scientists found that drones alternated between periods of straight and convoluted, looping flight patterns within a single flight. On further investigation they showed that phases of looping flight were associated with four distinct aerial locations where drones congregated and these specific areas were consistent over a two year period.

A new form of mating system

The researchers propose that drone congregation areas could function like ‘leks’, mating systems in which large numbers of males gather solely in an attempt to mate. Lek systems are most well known in vertebrates, like deer and grouse, and males are typically faithful to a single lek location.

Dr Joe Woodgate, a Postdoctoral Researcher at Queen Mary and lead author of the study, said: “By using harmonic radar technology to track the bees, we found that individual flight paths show a clear change of behaviour from straight flight to looping flight. Periods of looping flight were clustered in particular locations and repeatable over two years, confirming that stable drone congregation areas, similar to ‘leks’ in other species, do exist.”

“We show that drones frequently visited more than one congregation area on a single flight. This is the first evidence for males of any species routinely moving between lek-like congregations and may represent a new form of lek-like mating system in honeybees.”

The researchers still don’t understand how the drones find these congregation areas in the first place. Drones are born in Summer and their average lifespan is only around 20 days, so new generations can’t find these areas by following older drones. “Our findings suggest drones locate congregation areas as early as their second ever flight, without apparent extensive search. This implies that they must be able to get the information required to guide them to a congregation from observing the landscape close to their hive. In the future, we will look at how they accomplish this feat,” said Professor Lars Chittka, Professor of Sensory and Behavioural Ecology at Queen Mary and supervisor of the project.

Dr Joe Woodgate, the lead researcher for the study is also part of the EPSRC-funded ‘Brains on Board’ programme that aims to create robots with the navigational abilities of bees. He added: “We believe that bee-inspired robotics will play a role in improving robotics and artificial intelligence in the future. Understanding how bees select and find distant goals based on their explorations of their surroundings will be important for this.”