In September I facilitated public engagement training for fifteen PhD students from the aboutflow programme. The purpose of the week was for each student to leave with a plan for a public engagement project and a better understanding of research communication, but more generally I was interested in their attitudes to public engagement and what affects these. 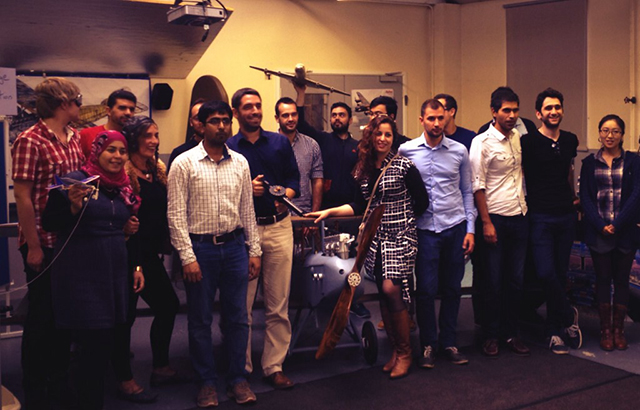 Aboutflow takes engineering PhD students from across the world and places them in European countries to study air flow over objects. As part of the training programme they come together for week-long training sessions in different topics. This week was about introducing public engagement to them and working together to create practical activities based on the students’ own research.

For me this was a great opportunity to witness researchers’ views towards public engagement, and at the start of the week I witnessed a hesitant response, with the kind of questions that often come up as reasons not to engage. How will I find time? How could non-specialists understand my work? Why target the wider public rather than concentrate on funders?

These are real concerns, and while there may be logical answers obvious to those that specialise in public engagement, the solutions are rarely clear cut. Those working in research are not always given reason to look further at how or why to resolve their worries.

However, as the week went on, I was surprised to see how little encouragement it took for the PhD’s to look beyond perceived barriers and find ways of opening their subject to others. A lot of this started with observing a school group at Duxford’s Imperial War Museum. The instructor used practical activities and representations to demonstrate complex scientific concepts to 7 year olds, really opening the eyes of the PhD students, surprised by the knowledge and enthusiasm of the children.

This class demonstrated ways to take complex engineering and demonstrate it in an engaging and informative way, proving that communicating their work could be accessible and rewarding. While the session was based on children, after the class had left the PhD students were immediately playing with the experiments, something we pointed out when they asked them how these ‘toys’ could appeal to adults.

In subsequent exercises around communicating research, the negativity faded and the students were coming up with creative methods to explain their work, such as using pictures for children instead of words, and approaching definitions from the interests of adult groups to unlock interest and understanding.

While the questions from the start of the week continued, they became constructive questions rather than roadblocks, and the answers were used to then return to us with some truly fantastic ideas. I found a key to this enthusiasm was the idea that others could be interested in their research, as well as influencing young people to take up their subject. The group were all familiar with the frustration of trying to explain what they do to friends and family and seemed excited at the idea that they could create ways of spreading their enthusiasm for engineering.

In all the week was a huge success, by Friday nearly every PhD had a viable project with clear action plans and, most importantly, a large number of them were excited about doing theirs. While it may be naïve to think they will all go on to do these activities, the week left them feeling positive about public engagement, improving the chance that they will go on to initiate and support these activities in the future.

On a final thought, we started this week using examples of engagement based on working with children, which had a strong influence on the final projects. Based on my experience, examples such as teaching enthusiastic children, or entertaining ways of disseminating knowledge are often used as ‘hooks’ to draw people in and attract interest in public engagement. However, to achieve a greater range and depth of engagement, it’s important that these initial approaches are built on and developed to explore the whole breadth of PE activities, so that researchers can find the aspect that most appeals to them rather than the one that was easiest to introduce them to.