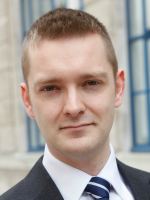 Dr James Strong joined the School of Politics and International Relations as a Lecturer in September 2017, and was promoted to Senior Lecturer in October 2019. He previously spent four years as a postdoctoral fellow in the Department of International Relations at LSE, where he received his PhD in 2012. He spent the 2012-2013 academic year as Head of the Director’s Office at LSE, supporting LSE Director and President Professor Craig Calhoun. In an earlier life he worked as a graduate trainee at KPMG LLP, specialising in US and UK personal tax.

POL260 Power and Legitimacy in British Politics (Semester A)

Dr Strong studies the domestic politics of British foreign policy. His first book discussed the relationship between public opinion, parliament, the press and the Blair government during the lead-up to the 2003 invasion of Iraq. He has written a series of articles on the role of the House of Commons in military deployment decisions, and is working on a second book project expanding this research into a historical analysis of parliamentary war powers in the UK. He has also written on how individual leader psychology and national role conceptions influence foreign policy decision-making.

2018 ‘Confidence and caretakers: Some less-obvious implications of the Fixed-term Parliaments Act’, The Political Quarterly, 89:3, pp. 466-473.

2018 ‘The war powers of the British parliament: What has been established and what remains unclear?’ British Journal of Politics and International Relations, 20:1, pp. 19-34.

2017 ‘Two level games beyond the United States: International indexing in Britain during the wars in Afghanistan, Iraq and Libya’, Global Society, 31:2, pp. 293-313.

2015 ‘Why parliament now decides on war: Tracing the growth of the parliamentary prerogative through Syria, Libya and Iraq’, British Journal of Politics and International Relations, 17:4, pp. 604-622.

Dr Strong gave both written and oral evidence to the House of Commons Public Administration and Constitutional Affairs Committee’s inquiry into the role of Parliament in authorising military force.