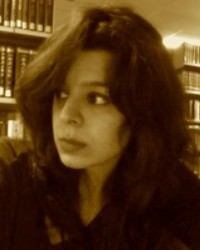 I joined the School of Politics and International Relations in 2017. I previously worked at the LSE and the University of Leiden in the Netherlands after completing a PhD in 2014 at the University of Cambridge.

My book: Imagining Afghanistan: the History and Politics of Imperial Knowledge was published in 2020 and looks at the ways  in which Afghanistan has been represented and repeatedly intervened in from the 19th century until 2001. I am interested in exploring the connection between knowledge production and the ‘episteme’ on one hand, and the material ramifications of this knowledge on the ground evinced in processes of invasion, war, and societal restructuring. My work is historically oriented and my next big project is an intellectual history of four mid-twentieth century thinkers who engage with the question of the border in creative and sometimes contradictory ways.

My teaching reflects my research interests and vice versa. I am currently convening a new module (with Adam Eliot-Cooper) entitled ‘Racism and Anti-Racism in World Politics’.

She blogs at the www.thedisorderofthings.com and is the Co-Convener of the BISA Colonial Postcolonial and Decolonial Working Group.

I am especially interested in the ways in which knowledge is produced and the raced, classed and gendered nature of both ‘expertise’ and ‘common-sense’.

Although I don’t have regional focus per se, I am interested in the histories of colonial intervention in South Asia and the Middle East. I am also increasingly interested in role of capitalism in perpetuating racial hierarchies globally.

I received funding for my PhD from the Cambridge Commonwealth Trusts. I have also been the recipient of numerous other grants including Santander Research Grants and the Cambridge Political Economy Trust. Between February and May of 2022, I was the recipient of a Katekisama Fellowship based at the University of Basel.

‘The banalization of race in international security studies: From absolution to abolition’ Security Dialogue, 52(1_suppl), 49-59, 2022

‘The Graveyard of Empires: Haunting, Amnesia and Afghanistan’s Construction as a Burial Site’ Middle East Critique, Vol 28, no. 3 pp 307-320

‘Borders and Queer Theory’ in The Routledge Encyclopedia of Race and Racism edited by Gargi Bhattacharya. (forthcoming 2022)

‘The Imperial Sociology of the ‘Tribe’ Handbook of Postcolonial Politics, edited by Robbie Shilliam and Olivia Rutazibwa, London: Routledge, 2018

Review of Megan Daigle’s From Cuba with Love (2015) available at: https://thedisorderofthings.com/2015/08/07/the-affectual-jockeys-of-havana/

‘Out of Nowhere: Taliban and Malala’ OpenDemocracy (November 2012) available at: https://www.opendemocracy.net/opensecurity/nivi-manchanda/out-of-nowhere-taliban-and-malala

I’d be keen to supervise students working on race, gender, the question of borders, and histories and presents of (settler) colonialism

I have written for the Conversation, Open Democracy, and appeared on news outlets including the BBC and CNN.