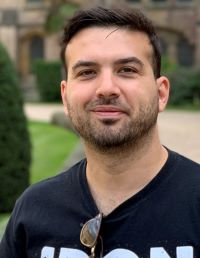 Senior Lecturer in Politics and International Relations, Institute for the Humanities and Social Sciences Fellow

Paul is a Senior Lecturer and Fellow of the Institute for the Humanities and Social Sciences, with a particular interest in gender governance, statecraft, pop culture, critical war studies, and IR theory and meta-theory. He is currently a Co-Director of the GCRF Gender, Justice and Security Hub, a multinational, interdisciplinary research consortium investigating the politics of gender justice and inclusive peace.

Paul is himself currently working on three overlapping projects: a first on the politics of the Women, Peace and Security (WPS) agenda, especially as it is conceived and practiced by states in the global north; a second on the history of feminist reformulations of foreign policy and statecraft; and a third on the emerging governance of masculinity in global politics, as in attempts to reform or abolish ‘problematic’, ‘toxic’ or ‘hyper-‘ masculinities. He has also previously written on feminist IR theory, pop cultural politics and open access.

Paul arrived at QMUL in September 2022, having previously been an Associate Professorial Research Fellow at the LSE Centre for Women, Peace and Security (where he remains a Visiting Fellow) and Senior Lecturer in the School of Global Studies at University of Sussex. He has provided evidence to Parliamentary committees on WPS and open access issues and written on these topics for ForeignPolicy, wonkHE, e-IR and the LSE Centre for WPS. He is also the author of the gender chapter in the Baylis, Smith and Owens textbook The Globalization of World Politics and has been a co-editor of the European Journal of International Relations, Millennium: Journal of International Studies, the LSE Women, Peace and Security Working Paper Series, and guest co-editor of the International Feminist Journal of Politics (2012) and International Affairs (2016).

Paul’s current research interests are global gender governance (particularly the Women, Peace and Security agenda and humanitarian, development and security interventions into ‘masculinity’) and the theory and practice of statecraft (particularly feminist critiques and reformulations in the twentieth century).

Paul has previously worked on feminist theorising in International Relations, martial empiricism, and narrative IR. He expects to return to the theme of pop culture in due course, to better elaborate the imaginative and political uses of speculative fiction.

(with Toni Haastrup) ‘It Takes More Than a Diverse Cabinet to Advance a Feminist Foreign Policy’, ForeignPolicy.com, 20 January 2021

‘The Climate for Women in IR and Politics’, The Disorder of Things, 6 March 2017

‘Open International Relations: The Digital Commons and the Future of IR’, e-IR, 10 November 2015

(with Kathleen Kuehnast) ‘What Do We Really Know About Sexual Violence?’, Foreign Policy.com, 10 December 2014

(with Meera Sabaratnam) ‘Why Metrics Cannot Measure Research Quality: A Response to the HEFCE Consultation’, The Disorder of Things, 16 June 2014

(with Meera Sabaratnam) ‘Open Access: HEFCE, REF2020 and the Threat to Academic Freedom’, The Disorder of Things, 4 December 2012

‘Damage, Unincorporated: War Studies in the Shadow of the Information Bomb’, Journal of Intervention and Statebuilding, 5(3), 2011: 335-345.

‘That Obscured Subject of Violence’ (with a response from Slavoj Žižek), Subjectivity: International Journal of Critical Psychology, 3(1), 2010: 117-121.

I welcome the opportunity to supervise doctoral students in the following areas: