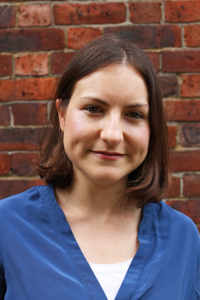 Senior Lecturer in Sociology and Politics

Dr Rachel Humphris is a political ethnographer whose research and teaching focuses on immigration and citizenship, urban governance, gender and race. Prior to joining the School of Politics and International Relations in September 2019 Rachel was a Lecturer in Sociology and Social Policy at the University of Birmingham (2017 – 2019) and Research Fellow at the Centre on Migration, Policy and Society, University of Oxford (2014-2017). Rachel has been a visiting fellow at the Max Planck Institute for the Study of Religious and Ethnic Diversity, University of California - Berkeley, York University Toronto and the University of Sheffield.

Rachel’s research programme is methodologically diverse, theoretically grounded and empirically driven. She employs qualitative research methods that engage with theories and debates in critical migration and border studies, anthropology of the state and critical urbanism. Much of her work is inherently interdisciplinary, cutting across research in anthropology, geography, politics, public policy and sociology. Her published research can be found in Antipode, Geopolitics, the Sociological Review, and the Journal of Ethnic and Migration Studies, among others. Her monograph, Home-land: Romanian Roma, domestic spaces and the state was published with University of Bristol/University of Chicago Press in March 2019.

Rachel is the recipient of several awards and fellowships including the Human Welfare Prize, University of Oxford (2014), the Aston Webb Award for Outstanding Early Career Academic, University of Birmingham (2019) and a Leverhulme Early Career Fellowship (2018 – 2021).

Rachel is an Associate Editor for the journal Sociology and co-convenor of the British Sociological Association Migration, Transnationalism and Diaspora Group.

Rachel is interested in supervising doctoral students related to her research interests.

Katherine Maria Phipps: Citizens of the World? Narratives of Mobility and Identity across Generations in Greece

My research focuses on the relationship between migration and citizenship and the impact on local lives, identities and places. My work is grounded in contexts of rapid urban change in North America and Europe. My research agenda touches on several themes including radical positive programmes for urban futures; the influence of various forms of mobility on urban political and moral economies; and the governance of urban marginality.

I conducted long-term ethnographic research with Roma migrants from central and eastern Romania. My book Home-land: Romanian Roma, domestic spaces and the state (Bristol University Press, 2019) is an ethnography of new migrant families’ experiences of making home in a ‘downscaled’ urban area in the context of hostile national immigration, welfare, and labour policies. My current project Welcoming Cities? Understanding sanctuary in securitised states is a policy ethnography of urban sanctuary policy and practice across Canada, United States and UK. The project explores how cities can shape global migration governance and citizenship when facing aggressive securitisation of nation-states amid rapid social and economic change. I am currently writing a monograph entitled ‘The moral economy of sanctuary cities: Migration, Citizenship and Global Governance’ which provides a new perspective on how common ground is negotiated and contested in sanctuary cities; how urban residents are moved to act; and what political potentials are being opened (and foreclosed) in these contemporary cities.

Becoming adult: Conceptions of futures and wellbeing among young people subject to immigration control in the UK, ESRC

UPWEB: Understanding the practice and developing the concept of welfare bricolage in diverse European cities, NORFACE

Making the most of EU Funds for Sustainable Housing and Inclusion of disadvantaged Roma (explicitly but not exclusively targeted), United Nations Development Programme, Bratislava

2017 The Role of Further and Higher Education as a Pathway from Poverty in London. Walcott Foundation.

Meloni, F., and Humphris, R., (2019) Citizens of nowhere: The paradoxes of care and responsibility for unaccompanied minors in the UK Journal of Refugee Studies doi: 10.1093/jrs/fez037

Humphris, R., and Sigona, N., (2019) Outsourcing the ‘best interests’ of unaccompanied asylum seeking minors in the era of austerity Journal of Ethnic and Migration Studies 45:2, 312-330.

Humphris, R. (2013) ‘Refugees and Rashaida: Human smuggling and trafficking from Eritrea to Sudan and Egypt’ New Issues in Refugee Research No. 254. March 2013.

Humphris, Rachel (2020) A history of the memories of the sanctuary city in Sheffield, UK. 43:2020 Edgbaston: University of Birmingham.

Sigona, N. and Humphris, R., (2016) ‘Child mobility in the EU’s refugee crisis: What are the data gaps and why do they matter?’ IRiS Working Paper 16:2016 Edgbaston: University of Birmingham.

Rachel currently works with a range of organisations supporting migrants across the UK, Europe, Canada and North America and is a founding member of Social Scientists Against the Hostile Environment.

Previously Rachel was a consultant for numerous UN and international agencies including UNHCR, International Organisation on Migration, World Health Organisation and the OECD. She was the UK Coordinator for the European Website on Integration 2016 – 2019.