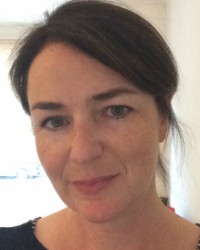 Madeleine’s main research interest is in the history of the left in Britain, with a focus on the development of socialist political thought in the mid to late twentieth century. She has a particular interest in the work of intellectuals and activists associated with the post-1956 British New Left, as well as some aspects of communist and labour history. Madeleine completed both her undergraduate and postgraduate degrees at the University of London. She joined Queen Mary as a lecturer in 2000, shortly after completing her PhD.

Madeleine is a member of the editorial collective of Socialist Register, and of the advisory board of Soundings.  She is an associate of the Raphael Samuel History Centre (RSHC) and serves on the board of the George Lansbury Memorial Trust. She is a member of two specialist groups of the UK Political Studies Association, the Labour Movements Specialist Group, and Communism Specialist Group.

My major research interest is in the history of the left in Britain. I have focused especially on the post-1956 British New Left, a vibrant activist and intellectual current whose best-known thinkers included E.P. Thompson, John Saville, Stuart Hall, Raymond Williams, Ralph Miliband, Perry Anderson and Tom Nairn. Following my PhD, a study of the ‘Nairn-Anderson theses’ developed within the journal New Left Review from the early 1960s, I pursued work examining the specificity of New Left ideas within the British ideological context, and its role in ‘brokering’ new developments in Marxist thought within Britain, as well as the contribution of its thought to a wider critical reworking of Marxist theory. I have written on the New Left’s relationship to pre-existing British communism; on the relationship between the New Left and the Labour Party; on its location within the broader international New Left of the 1960s, and on the somewhat neglected contribution New Left thinkers have made to broader developments in British political thought, for example their challenge to Croslandite revisionism. I have published several pieces on the ideas and activism of Edward Thompson.

The British New Left and its Legacy:  a book project aiming to provide a synoptic study of the New Left’s political thought and (to some extent) activism, organized around three broad themes: redefining socialism, political organization and the politics of culture.
Activist histories of the British New Left: a project that reconsider the New Left’s involvement in activist and grassroots political mobilisation and agitation. I staged an exhibition on this theme at the Radical Histories festival in 2016, have led a project to digitise the radical newspapers Black Dwarf and 7 Days, and have given several conference papers.

The British New Left and its Legacy (in preparation)

‘Edward Thompson, MI5 and the Reasoner controversy: negotiating “Communist principle” in the crisis of 1956, Key Words: A Journal of Cultural Materialism, Issue 16, 2018.

‘Edward Thompson’s ethics and activism 1956-1963: reflections on the political formation of The Making of the English Working Class’, Contemporary British History, 2014.  http://www.tandfonline.com/eprint/QeuZ3NzW3JarWijzgD2G/full#.VC0pwVeKUYQ

‘Can one nation Labour learn from the British New Left?’ guest editorial, Renewal, Vol. 21 No 1, 2013 http://www.renewal.org.uk/articles/guest-editorial-can-one-nation-labour-learn-from-the-british-new-left/

‘Dictators and democrats in Latin America; but can the poor tell the difference?’ Radical Philosophy, 104, November 2000, pp.2-6.

‘The New Reasoner and the early New Left’ in David Howell, Dianne Kirby and Kevin Morgan (eds.) John Saville: commitment and history. Themes from the life and work of a socialist historian (Lawrence and Wishart, 2010) pp.30-50.

‘Rebirth of a small dark stranger: the Black Dwarf, the British New Left, and 1968’, openDemocracyUK, 18 May 2018. (with Ross Speer) https://www.opendemocracy.net/uk/madeleine-davis-and-ross-speer/rebirth-of-small-dark-stranger-black-dwarf-british-new-left-and-19

Exhibition: ‘Activist intellectuals: the British New Left as a social movement’, in collaboration with Mike Berlin and the Amiel Melburn Trust, exhibited as part of  Radical Histories 2016 (http://www.raphael-samuel.org.uk/radical-histories/)

‘Activist intellectuals: the British New Left as a social movement’. Contribution to ‘Before ’68: The Left, activism & social movements in the long 1960s’, 13-14 February 2016, University of East Anglia.

I have supervised doctoral work on topics including: ‘Poststructuralist readings of Marx’; ‘Dialectics and critical social theory’; ‘Genesis, development and consequences of post-Marxist critical thought’.

I very much welcome applications from prospective PhD students. I would especially like to hear from students interested in pursuing doctoral study on:

‘Among the ordinary people’: the New Left and working class political mobilisation 1956-1968’, the inaugural Matthew Caygill Lecture at Leeds Beckett University, 3 May 2017.

‘Socialist humanism as the cultural politics of the early New Left’, talk given as part of panel discussion (with Nick Beech and Mike Berlin) 11 May 2017, to accompany the exhibition The Partisan Coffee House 2017, http://www.fourcornersfilm.co.uk/partisan-coffee-house-may-2017

‘The Socialist Register at 50: Class and Politics in Britain’, at Historical Materialism 10, 9 November 2013, with Colin Leys, Andrew Murray, Leo Panitch, and Greg Albo.

‘The Mayday Manifesto then and now’, launch event for new edition of The May Day Manifesto, Marx Memorial Library, 23 May 2013, in association with Soundings.

I am an associate of the Raphael Samuel History Centre ( http://www.raphael-samuel.org.uk), a research and educational centre devoted to encouraging the widest possible participation in historical research and debate. I serve on the management board of the centre and was a member of the organising team for Radical Histories/Histories of Radicalism, a major public history festival that took place at QMUL in July 2016.  A temporary exhibition based on my research on activist histories of the British New Left was staged at the festival, produced in collaboration with Mike Berlin (Birkbeck) and with funding from the Amiel Melburn Trust.

Recently I have led on a project, also funded by the Amiel Melburn Trust, to digitise the newspapers Black Dwarf (1968-70) and 7 Days (1971-2) for their free online archive of radical periodicals (http://banmarchive.org.uk/archive_index.htm)

I am on the advisory board of Soundings  https://www.lwbooks.co.uk/soundings and am a member of the editorial collective of Socialist Register. http://socialistregister.com/index.php/srv#.WY2E-XqYHaA I am also on the Board of the George Lansbury Memorial Trust, which works to promote awareness of the life and work of George Lansbury and the progressive causes with which he was associated.

Aside from my academic work I am active in campaigning for affordable housing in Hackney and Tower Hamlets, and am vice-chair of the Victoria Park Community Association.  In 2010, with other affected tenant groups, we organised and ran a successful campaign to prevent some 1300 key-worker homes across London being sold to private landlords.  A selection of photographs documenting the campaign is available at  http://www.victoriabirkinshaw.com/OurHomes_home3.html