Extremist sympathies more likely in White British and UK-born people, and those with some common mental illnesses

White British people are almost twice as likely to hold extremist views as people of Pakistani heritage in England, according to a study by Queen Mary University of London. 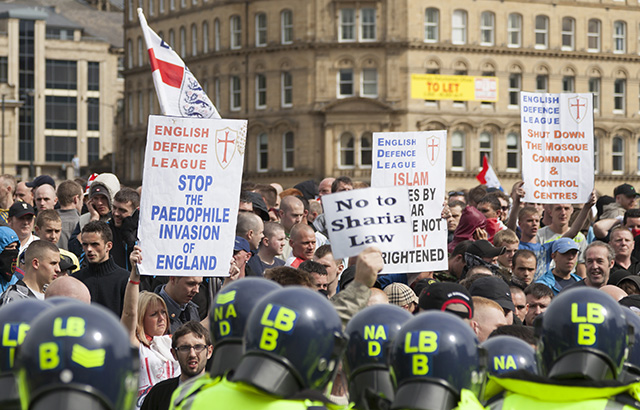 The study, published in the British Journal of Psychiatry, also found that depression, anxiety and post-traumatic stress were associated with having extremist sympathies.

“The fact that those who are White British are approximately twice as likely to have extremist sympathies as those of Pakistani heritage will therefore come as a surprise. This raises concerns about right wing extremism and suggests that a focus on tackling Islamic fundamentalism is flawed, and we need to consider extremism more generally.

“The link we’ve found between poor mental health and extremist thoughts shows that we need much more progressive thinking and better research on the causes of extremism and what might be done to prevent it. Our study suggests some mood symptoms, anxiety and traumatic symptoms may be important susceptibility factors.

“It shows us how important it is to support people with mental health issues, who may be less able to manage radicalising messages, and could end up adopting extremist sympathies. This provides yet another reason why it’s so important to think about our communities’ mental health.”

13 per cent were sympathisers of violent protest and terrorism

The study used a survey of 618 people, including White British and Pakistani heritage men and women living in Blackburn with Darwen, Bradford, and Luton.

Extremist sympathies were assessed using ratings on seven items* of an established measure of sympathies for violent protest and terrorism (SVPT), and information was collected on diagnoses of depression and symptoms of anxiety, personality difficulties, autism and post-traumatic stress.

Preventing the process of radicalisation

Measuring actual extremist behaviour and engagement with extremist networks is complex. Instead, measuring sympathies for such acts provides a way of studying a potential susceptibility to violent behaviour and terrorism ethically, in the population at large, without incrimination, or breaches of confidentiality. This can help test prevention policies and practices if the measure were included in national surveys.

Extremist views and attitudes are also more common than acts of terrorism, and may indicate a preliminary stage of the radicalisation process that can be prevented, yet this link needs more research.

The findings of this study may also be used in helping UK public servants, such as doctors and mental health professionals, who have been asked to show ‘due regard’ to the identification of those at risk of radicalisation. The measure may be a useful supplement to mental health assessments.

Racism in current debates on immigration

Dr Clive Gabay from Queen Mary's School of Politics and International Relations, who was not involved in the study, added: “This research should serve as a wake-up call to policy makers and political commentators who continue to downplay anti-BAME racism from white population groups. Racism is a serious factor in the current political debates around immigration and integration, and we need to be mindful of the re-emergence and growing popularity of extremist anti-BAME and anti-immigrant views.

“These findings also dovetail with other research that suggests that large numbers of those who voted in favour of leaving the European Union were rural and suburban middle class voters with racist and prejudicial attitudes towards migrants driven by socio-economic anxieties concerning their own historically accrued privileges.”

The study is limited in that the data are self-reported by participants. A potential limitation of the SVPT measure is that respondents need only sympathise with one item to be considered to hold extreme views. Using a threshold of two or more sympathies to classify sympathisers led to similar results, although only 23 people then showed sympathies. Sympathising with committing minor crime was the most commonly endorsed item. Excluding this item from the classification of those with sympathies, however, produced no major changes in results.