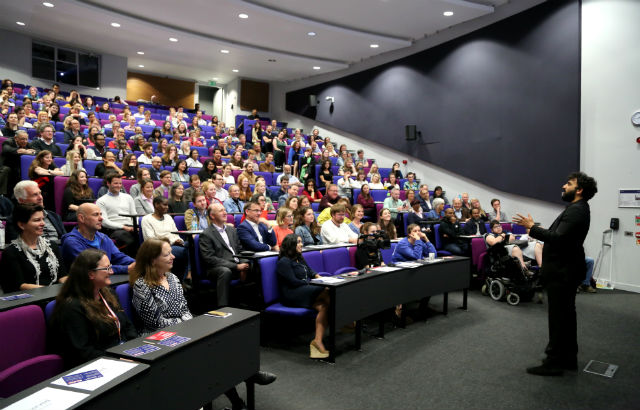 The Annual Arts Lecture is the flagship event of Queen Mary’s Arts and Culture programme.

Nish Kumar, in addition to working as a comedian, is also an actor and presenter and delivered a performance at Queen Mary University of London which set out his vision of an inclusive and socially diverse arts culture.

This event, which was part of Queen Mary’s Public Lecture Series was presented in association with the educational charity Arts Emergency. After Nish Kumar’s performance a Q&A took place, hosted by fellow comedian Josie Long.

Nish Kumar did not shy away from tackling the political issues of the day, including Brexit, of which he is an outspoken critic. He believes the political situation in the UK and the rise of populism have galvanised him to become more outspoken. “Brexit changed my perception and understanding of where my responsibilities are,” he explained.

The comedian also reflected on the themes of power and privilege, using the example of rolling news: “The capacity to disengage from the news is a privileged position. Not everyone has that privilege.” Josie Long added: “People who are directly affected by topics in the news, such as cuts to social security, do not have the luxury of switching off.”

Kumar, whilst concerned about political developments around the world, remains optimistic, particularly when it comes to the younger generation: “The only way we can move forward is by having awkward conversations. It’s the only way we are going to create any progress.

Both Josie Long and Nish Kumar discussed unpaid internships, which are prevalent in the arts. “The creative industries rely heavily on these unpaid internships. Only the smallest percentage of people can manage this which adds to inequality in the sector,” explained Josie Long.

Nish Kumar added: “Once you’ve broken through, look back at the path you’ve taken and throw a line back to those behind. Share the privilege.”

Nish is the host of the satirical news programme, The Mash Report on BBC 2 and stars in the Comedy Central travel show Joel & Nish vs The World. He’s a regular contributor to Have I Got News For You, Mock the Week, QI and many others, and is currently on a nationwide tour.

Arts and Culture at Queen Mary

Queen Mary launched its Arts and Culture strategy in November 2017 with the aim of developing the university as a world-leading centre of excellence in arts and culture within higher education.

Last year’s Inaugural Arts Lecture was delivered by Dr Maria Balshaw, Director of Tate, who recently took up the role of honorary professor in Queen Mary’s School of Business and Management.

Queen Mary’s new Public Lecture Series brings together Inaugural, guest speaker and ‘hot topic’ lectures taking place from all schools and departments from across the university. The events, which cover a range topics and subject areas, are open to all staff and also the general public.