School students have successfully identified sounds caused by a solar storm in the Earth’s magnetic shield, as part of a Queen Mary University of London research project. 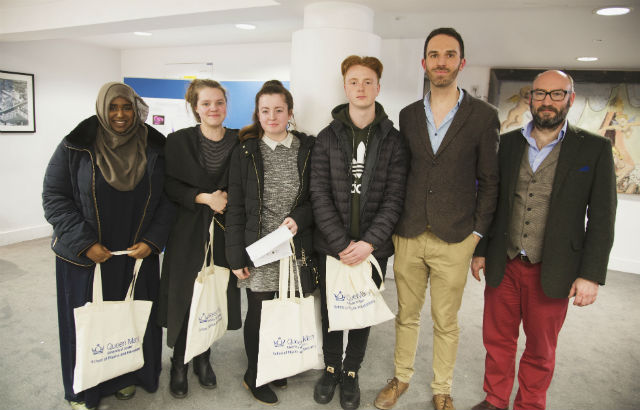 The findings, by a group of year 12 pupils from Eltham Hill School in south east London, have now been published in the scientific journal Space Weather.

The project encouraged schools in London to take part in university research and the resulting study presents a novel approach to undertaking scientific research by making data audible for school students to explore by listening to it.

Earth's magnetic shield, which protects us against harmful radiation from the Sun and more distant sources, is rife with a symphony of ultra-low frequency sounds. These sounds, or waves, are too low-pitch for us to hear but a researcher at Queen Mary made satellite recordings of them audible by dramatically speeding up their playback.

A disturbance to Earth's space environment

The group of students identified a series of waves whose pitch decreased over the course of several days. They found that this event occurred after a Coronal Mass Ejection, or ‘solar storm’, caused a great disturbance to Earth’s space environment.

The study shows that the waves were somewhat like the vibrations of a plucked guitar string which forms a distinct note, but applied to Earth’s magnetic field, while the changing pitch was due to the recovery process of our space environment following the storm.

Events like these have rarely been discussed, but by taking advantage of the audible data’s sped up playback and the amazing abilities of the human ear, the study reveals many similar patterns present in the data showing them to be far more common than previously thought.

Dr Martin Archer, space physicist at Queen Mary’s School of Physics and Astronomy, and academic lead on the project, said: “The findings could transform the field, enabling more members of the public to contribute to research just by listening to data and finding things that scientists might have missed. We hope that this becomes more widespread since we are living in the age of ‘big data’.”

Isobel Currie, one of the students from Eltham Hill School involved in the project, added: “It was truly amazing to hear how significant the event we found was and that it will be forming the basis of a proper scientific paper. We gained so much experience and developed many skills during our research that will be useful during our time at university, and it gave us a great insight into the work conducted at that level.”

Disturbances to Earth’s magnetic shield like this pose risks to our everyday lives because they can damage technology like power grids, GPS and even passenger airlines. These waves are one way the energy that comes from solar storms can be transferred around Earth’s space environment.

A new kind of citizen science

The study has highlighted that current methods have been missing some important and fairly common classes of waves and that new techniques may be able to help.

Dr Archer said: “Making data audible is uncommon and when done so is typically used only by the researchers themselves. Involving the public in undertaking research, known as citizen science, tends to focus on crowdsourcing data or analysis unlike this more explorative method. However, the study shows that useful and unexpected scientific results can come from this combined approach.”

The data was taken from the USA’s Geostationary Operational Environment Satellites which are operated by the National Oceanic and Atmospheric Administration. Following the potential demonstrated in the paper, they will be making the full audible dataset publicly available.

The researchers will now be looking to find out which disturbances of Earth’s magnetic shield lead to these decreasing pitch sounds and why. This will build up a better picture of what happens and may improve the forecasting of space weather.